Proposed Regulations Regarding Source of Income From Activities In Intl. Waters

The Internal Revenue Service (the "IRS") has issued proposed regulations under section 863 of the Internal Revenue Code of 1986, as amended (the "Code"), providing new rules for determining the source of income from activities conducted in international waters for purposes of U.S. income taxation.

These new regulations come shortly after the release last year of regulations under Section 883 of the Code that significantly affected the exemption from U.S. income tax of income from the international operation of a vessel owned by a non-U.S. corporation.

While the new regulations also apply to space activities and similar new regulations apply to communication activities, the new rules may have the most significant impact on both U.S. persons engaged in shipping activities through a foreign corporation and foreign shipping companies currently doing business in the United States. The IRS is accepting written comments on the proposed regulations and there will be a public hearing that is currently scheduled for March 28, 2001, although we understand that, because of the interest generated by the proposed regulations, the IRS intends to delay the hearing until May.

While U.S. citizens, resident aliens and domestic corporations are generally taxed by the United States on all of their worldwide income regardless of where such income is earned, the source of income remains important for such purposes as determining eligibility for the foreign tax credit. For nonresident alien individuals and foreign corporations doing business in the United States, only income derived from U.S. sources is normally taxable. Whether income is from sources within or without the United States is determined for U.S. tax purposes by a set of technical rules contained in Sections 861 through 865 of the Code.

Ocean activity does not include any activity giving rise to transportation income, defined under Section 863(c) of the Code to mean income from the use, hiring or leasing of a vessel in connection with transportation that begins and/or ends in the United States.

With respect to the source of income from ocean activities, the proposed regulations alter in two significant ways the general rule contained in the Code. First, Prop. Reg. § 1.863-8(b)(2) provides that if a foreign corporation is 50 percent or more owned by vote or value (directly, indirectly or constructively) by U.S.

persons and is not a controlled foreign corporation, all income derived by the corporation from ocean activity is currently taxable as U.S. source income.

Under these proposed regulations, a greater portion of a foreign person's shipping income is now exposed to potential U.S. taxation. In some situations it is possible that the United States will attempt to tax income that is only remotely connected to U.S. operations and that previously was not taxed in the United States.

The proposed regulations must be applied to determine the source of income from sales of property purchased or produced by the taxpayer when either the production or the sale occurs in international waters. The new rules are complicated and require quite technical income allocations. Similar rules are provided for sourcing income derived from the performance of services in international waters. The proposed regulations also provide new rules for sourcing the income of partnerships engaged in ocean activities, basically sourcing U.S. partnership income at the partnership level, and sourcing foreign partnership income at the partner level. We recommend that all persons engaged in the shipping, offshore oil and gas exploration and production, and cruise ship industries become familiar as soon as possible with the new regulations.

Given their potential negative effect, the new regulations may warrant a substantial restructuring of the ownership of vessels engaged in the affected activities.

Even though taxpayers are permitted to produce evidence rebutting the presumptions in the new regulations with respect to the source of income, such evidence must be "satisfactory" to the IRS. The uncertainties inherent in trying to determine what particular evidence may ultimately satisfy the IRS suggest that the better option is simply to alter the ownership of vessels and foreign corporations so that the new regulations are not applicable. Since a significant restructuring may prove time consuming, an examination of the potential impact of the new regulations on a particular company should begin as soon as possible. 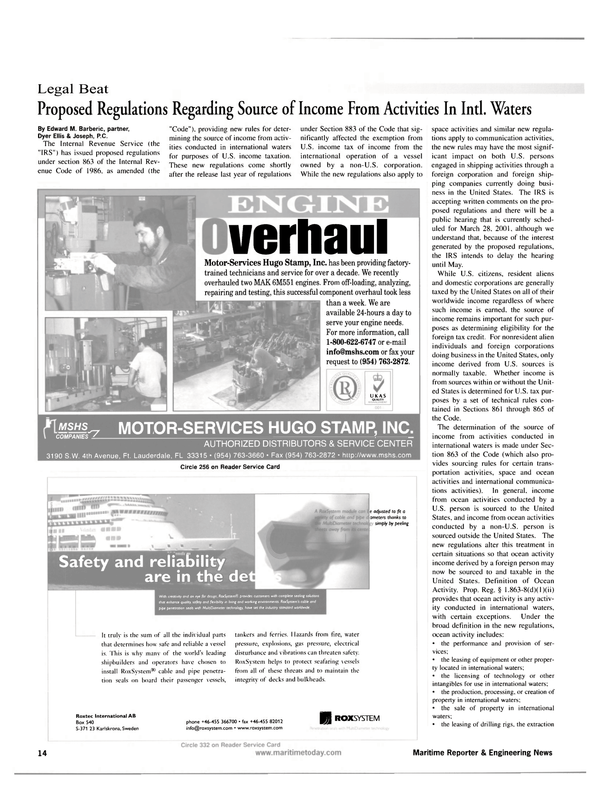 Read Proposed Regulations Regarding Source of Income From Activities In Intl. Waters in Pdf, Flash or Html5 edition of April 2001 Maritime Reporter

Other stories from April 2001 issue