The vessel repair statute (Section 466 of the Tariff Act of 1930, 19 U.S.C. § 1466) requires the payment of a 50 percent ad valorem duty on the cost of foreign equipment purchased for, or expenses of repairs made to, U.S.-flag vessels in a foreign country. The purpose of the vessel repair statute is to protect U.S. shipyards and to discourage vessel operators from taking their vessels abroad for the purpose of obtaining less expensive foreign repairs. The U.S. Court of International Trade determined that "section 1466 expresses the legislative policy designed to provide maximum protection to American shipyards." Mount Washington Tanker Co. v. United States, 505 F. Supp. 209. 214 (1980), affd, 665 F.2d340 (C.C.P.A. 1981). In the court's view: "It cannot be questioned that the protection of the domestic shipbuilding and repair industries was of paramount importance in the enactment of this legislation." The U.S. Customs Service interprets and applies the vessel repair statute through letter rulings, but its interpretations of the statute have not been without controversy.

One frequently contested issue concerns the manner in which Customs determines duties in connection with dry-docking expenses. Such expenses, or portions thereof, are not necessarily related to dutiable repairs that might be performed simultaneously with non-dutiable inspections and/or modifications for the convenience of the vessel owner. The leading case in this area is Texaco Marine Services, Inc. v. United States, 44 F.3d 1539 (Fed. Cir. 1994), in which the Federal Circuit determined that the cost of dry-docking and any costs related to dry-docking are dutiable repairs, provided that such costs would not have been incurred "but for" the dutiable repairs. Application of the "but-for" test is relatively simple in situations where the dry-docking is undertaken to perform either dutiable repairs or non-dutiable inspections and/or modifications, but becomes complicated where both dutiable and nondutiable work is performed during the drydocking (so called "mixed purpose" dry-dockings).

In a recent ruling, the Court of International Trade found the pro-rata apportionment used by the United States Customs Service in its application of the Texaco "but for" test to be "arbitrary, capricious, and in violation of the classification designated by Texaco." American Ship Management, LLC v. United States, Consolidated Court No. 99-03-00151, slip op.

The American Ship Management case involves two vessels that were put into drydock to comply with mandatory United States Coast Guard and American Bureau of Shipping inspection and modification requirements.

However, the court condemned the particular apportionment used by Customs as arbitrary and in violation of Texaco.

The court noted that the Texaco decision specified that "[tjhe mere drawing up of a vessel on a dry dock is not a part of her repairs, but is rather a method of making an inspection of her to determine whether any repairs are necessary." Again citing Texaco, the court stated that "the cost of tugs is an inevitable expense of a mandatory inspection and, thus, is not dutiable." The court added that all maintenance charges in connection with the dry-docking during the period of mandatory inspection and/or modifications are nondutiable under Texaco, notwithstanding whether or not any repair was performed during the same period. The court stressed the importance of the timing of dutiable repairs relative to the completion of non-dutiable inspections and/or modifications, holding that "only the maintenance expense of dry-docking for the period of time in excess of that necessary for a mandatory inspection and/or modifications are dutiable under the Texaco test." Judging from the Customs Service's past treatment of challenges to its interpretation and application of the Texaco case, a settlement in American Ship Management is unlikely. If the CIT's holdings are upheld, Customs may be forced to move from a percentage-based apportionment to a simple examination of timing in assessing duties related to dry-docking. 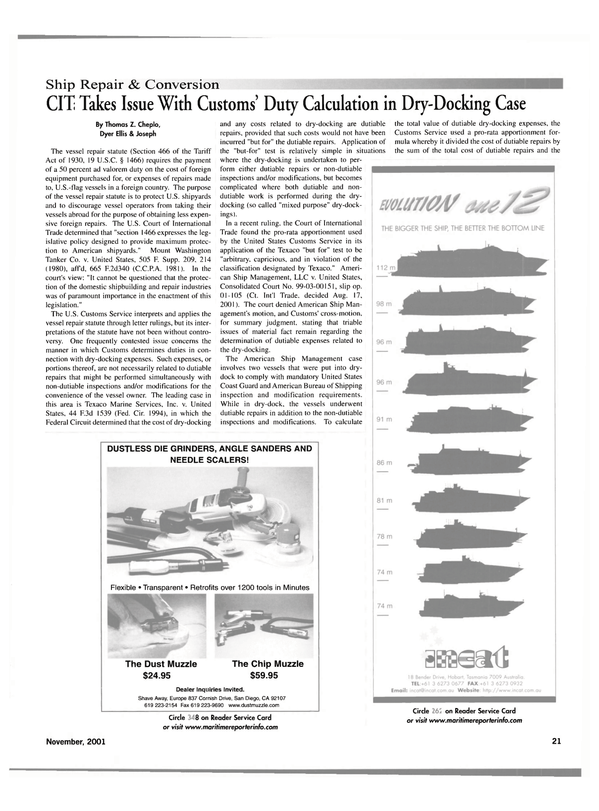