For Vigor Industrial, a privately-held shipbuilding and repair company headquartered in Portland, Oregon, the future looked bright and a bit ominous at the same time.  Work was coming in, dock space was filling up, future orders were signed, and new properties purchased; in short, business was booming.  But dark clouds crept in around the edges of this rosy picture.  As recruiters set out to find new talent to meet the growing demand, they encountered a candidate pool without the necessary skills to pick up a welding torch and go to work.  With 20% of its workforce approaching retirement and the economy on the mend, the problem was set to get worse.  Vigor’s ability to meet expected demand hinged on a labor force that didn’t appear to exist.

Workforce Development
Frank Foti, Vigor’s CEO, isn’t one to sit around and wait for problems to self-resolve.  He decided the best way to find a skilled available workforce was to train them in-house.  The Northwest communities in Portland and Seattle are the first to benefit from his vision of training the next generation of craftspeople for family-wage careers in the reviving American shipbuilding industry.
Skilled welders and other industrial craftspeople are a critical component for the country’s economic recovery.   Sue Haley, Senior Vice President of Human Resources for Vigor, states, “People want to work and industry needs a highly skilled workforce.”  However, the Pacific Northwest and Alaska have seen a decline in the number of trade schools teaching critical industrial skills.
Vigor’s previous efforts to provide training to their workforce often lacked a cohesive program and a global outlook.  Today Vigor is taking a more structured approach by teaming with local community colleges to provide shipyard-intensive welding courses.

Swan Island Training Center
It all started in Portland in 2008 when Mike Rasmussen, a welder since 1969 and a long-time Vigor employee, was approached by Portland Community College inquiring about renting space in the shipyard to train its welding students.  Rasmussen passed the request to his supervisor who brought it to the CEO.  Foti jumped on the idea telling his staff to “make it work.”
Eight weeks later, the Swan Island Training Center opened for class with 20 welding booths.  PCC provides the students, and oversees enrollment, tuition and scholarships.  They also grant college credits and industrial certifications.  Vigor provides the instructors, the work space, and something a shipyard has plenty of – scrap steel for practicing.  The classroom is located on Vigor’s 64-acre industrial shipyard facility.
Rasmussen, the lead instructor and now a full-time PCC employee, is justifiably proud of his work helping his students gain meaningful employment and lifelong careers.  He notes, “They can take the skills they learn in the classroom anywhere in the country.”
Classes run four days a week, five hours a day.  The program started with an evening class of 15 students, but quickly expanded to include an afternoon class.  The Swan Island facility now has a waiting list of more than 160 students.  “The demand is there,” said Rasmussen.
While students aren’t guaranteed a job with Vigor when they graduate, Haley says, “Vigor has hired approximately 40% of the qualified students from the PCC program that are actually looking for work.”  Some students already have jobs and take the course to improve their skills.

Harbor Island Training Center
With the success of the Swan Island facility, Vigor began thinking about a similar option in Seattle.  One day in late 2012, Haley was hosting a labor management committee meeting when CEO Foti dropped by and announced they would be building a training center in Seattle and that it would open on June 1.   With the announcement made public and a short deadline, Haley scrambled to find a training partner and space for the facility.  Within two weeks, she had a commitment from South Seattle Community College (SSCC) and 20,000 square feet of warehouse space on Vigor’s Harbor Island shipyard earmarked for future classrooms.
Vigor spokesperson, Brian Mannion, said Vigor built out the classrooms and weld-booths and supplied the equipment.  There is currently space for 24 students, but plans are already underway to increase that to 48.
Vigor’s investment in the facility topped a half million dollars.  In addition, both the Washington State House and Senate budgets have provided funding for the program.
The Workforce Development Council, a local non-profit, grant-making agency provided financial support and tuition assistance to help veterans and displaced workers attend courses at the center.  Says Mary Lockman, SSCC Program Advisor, “many students didn’t even have appropriate shoes or clothes” for working in a shipyard.  The WDC has helped meet those needs.
The educational partnership expanded when the United Association of Plumbers and Pipefitters, Local 32, joined the team.  The Union donated welding machines and provides additional training and certification options for current employees wishing to maintain or improve job skills, making use of the training center during non-class hours.  Says Haley, “The unions have been great to work with.  They share our interest in having more skilled people join the trades.”
The facility officially opened in June with the first class starting in July and running through December.  The facility includes a computer lab and formal classroom space for morning lectures and informal discussion time.
Ken Johnson, lead instructor and now a full-time SSCC employee, says, “Mornings we cover theory, symbols, processes to follow, and we set our objectives for the day.”  Guest speakers, including current shipyard craftspeople, give the students insight into the options available to them in the industrial workplace.  Afternoons are spent working with the equipment: cutting tables, industrial machining equipment, and the weld-booths.  “Students will master multiple weld types using actual deck plate,” says Johnson. “We anticipate each student will burn 25-30 pounds of [welding]wire.”
Johnson has been a working welder for 32 years, many of those at the Harbor Island yard.  He’s worked as a supervisor and in QA, among many other jobs.  His experience, patience and love of sharing his work with his students made him the perfect choice to emulate Rasmussen’s role in Portland.
The working floor has 24 welding booths each assigned to a specific student.  Students have a wide range of skill levels and each works at their own pace.  At the end of the five-month program, successful students will receive their welding certification.
Daniel Stone, recently discharged from the US Army, joined the first Harbor Island cohort.  Says Stone, “This is a great opportunity to find a job in a high-demand occupation.”
Fellow student Shannon Kelley is there because he “…wants to build ships.”  He enrolled at SSCC hoping to get a welding certificate and jumped at the chance to be part of the first self-contained program at the shipyard.  Shaking his head with amazement at his own words, he says, “I look forward to coming to school every day!”  On orientation day, Kelley rode the bus to the nearest stop, then walked a mile to the yard – and arrived early.  He’s been arriving early and leaving late every day since.
The college program brochure states;
Two quarters of training will prepare you to:
•    Diagnose and cure common welding defects
•    Demonstrate safe operation of oxyacetylene equipment
•    Complete FCAW welds in the vertical position for marine operations
•    Demonstrate knowledge of welding practices, joint fit-up, pre-weld preparation, back gouging, shear points, weld stress and warpage, and environmental effects on weld procedures
•    Execute shipyard specific skills
•    Safely accomplish welds out of doors in all weather conditions, and more!

Mary Lockman, SSCC program advisor says, “It really takes a certain kind of person for this job,” referring to the welding profession. “You have to be willing to spend the entire day buried inside that heavy welding suit and helmet working outside no matter the weather.”  She worried they wouldn’t be able to find enough students that fit the requirements, but she was happily wrong.  The first class filled in 4 weeks with a small waiting list, a list that is growing as word of the program spreads.
The Seattle and Portland programs give students the chance to work in a real-life industrial environment, to test it out and see if the job and the lifestyle are for them.  Rasmussen and Johnson both enthuse about the advantages of having their classrooms inside a working shipyard.  Says Rasmussen, “This gives the students a unique opportunity to see what this type of training can lead to. They actually can watch the new construction of barges and the ship repair activities, it’s very real-world!”
The Seattle program has dropped only one student - for being late to class.  As Johnson said, “If you can’t show up on time for class, you probably won’t show up on time for work.”
In addition to having pre-algebra math skills, some level of mechanical aptitude, and the ability to read and write English, students must pass a drug test, be at least 18 years of age and have a high school diploma or GED.
The success of the two programs has inspired Vigor to expand the concept.  Says Haley, “We are already collaborating with the University of Alaska in Ketchikan, [where Vigor recently purchased the Alaska Ship and Drydock facility] as well as other community groups and will be building training options for each of the communities where we do business.”
Without exception, every person involved in the training programs credits CEO Frank Foti for the program’s existence.  Says Johnson, “[Foti] was 100% supportive.”  Mannion concurs, “If Frank says ‘make it happen,’ it happens.”
With lists of eager students, expanding classrooms, and support from multiple sources, it appears the problem of insufficient skilled tradespeople is quickly becoming a thing of the past for Vigor. 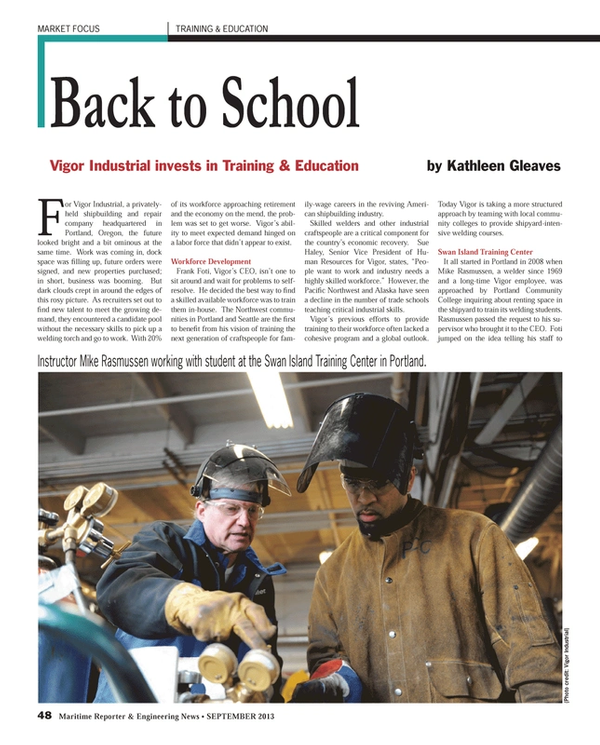 Read Back to School in Pdf, Flash or Html5 edition of September 2013 Maritime Reporter