In connection with an order of a series of 10 new 13,800 TEU container vessels from the world’s largest shipbuilding company Hyundai Heavy Industries (HHI), the global container transportation company APL requested DNV Maritime Advisory to cooperate with the shipyard to ensure superior hull efficiency of the vessels.

Optimizing the Hydrodynamic Performance of a Vessel
Ships used to be optimized for the design point (i.e. to give the best performance at the design draft and speed); however, the ship seldom sails in that condition. As a result, APL asked for a different kind of optimization to be performed, this time targeting various speed-draft combinations as described in the operating profile.

The overall hydrodynamic performance of a vessel is directly connected to the resistance and propulsive efficiency. The resistance is influenced by the hull shape, the wetted surface area and the configuration of appendages, while the propulsive efficiency is influenced by the propeller open water characteristics and the interaction between hull and propeller. The performance depends on the variation of operating conditions, i.e. vessel speed, draft and trim.

Vessels have traditionally been optimized for a single condition, normally the contract speed at design draft. With the help of state-of-the-art Computational Fluid Dynamics (CFD) tools and modern computers it is now possible to optimize a vessel for various conditions in which the vessel will be trading.

The Optimization Process
A typical project for hydrodynamic hull optimization may include:
•    Establishing a close dialog between DNV, the shipowner and the shipyard
•    Defining a realistic operating profile
•    Discussing and combining DNV’s design ideas with the yard’s design philosophy to obtain an optimal hull in both a hydrodynamic and building perspective
•    Optimizing the hull forebody based on the operating profile
•    Optimizing the hull aftbody to improve the propulsive efficiency, including consideration on propeller and machinery configuration
•    Assessing the Energy Efficient Design Index (EEDI)
•    Supporting during preparation and attending the towing tank model tests

The delivered value for the ship owner and the shipyard is increased confidence in the hydrodynamic performance of the hull. Typically, considerably improved fuel efficiency and reduced gas emissions are achieved throughout the vessel’s lifetime. In this specific case, the scope of work included:
•    Establishing a weighing matrix for the vessel’s relevant operating profile
•    Optimizing the hull forebody and aftbody (shoulders, bulb, transom stern height, etc.) based on the operating profile
•    Analyzing the wake and propulsion efficiency
•    Predicting the speed – power and fuel oil consumption curves
•    Assessing the preliminary EEDI
•    Attending the towing tank model tests

All simulations of resistance and wake assessment were performed using STAR-CCM+. According to OlavRognebakke, head of ship hydrodynamics and stability at DNV, it is the availability of powerful CFD tools such as STAR-CCM+, combined with the expertise of highly qualified staff which made it possible to enhance Hyundai’s already very good design.

Outcome of the assessment
The hull was optimized for five different design points (different speed-draft combinations). The aft part was optimized for maximum propeller efficiency. In addition, the bulb was lowered to be efficient at lower drafts too. While this solution may result in a marginal penalty at the original design condition, the aim was to optimize the hull for a range of operating conditions. Instead of a design speed of 25 knots, the new vessels were optimized for lower speeds, with a top speed of 23 knots, following the “slow steaming” trend observed in the last years. The overall improvement in energy efficiency was 36%.

Conclusion
By working closely and keeping a continuous dialogue with APL and HHI, DNV ensured that the best ideas and results were combined into the final hull design. It was estimated that the optimized hull will result in annual fuel savings of about $3 million per ship, which amounts to annual savings of $30 million for the whole fleet. These achievements provided positive market attention and ensured improved market positions for both the ship owner and the shipyard. Finally, the cost of the service provided by DNV Maritime Advisory is negligible compared with the savings achievable through improved fuel efficiency. DNV, which is an independent foundation, has entrusted all commercial rights to Hyundai Heavy Industries. 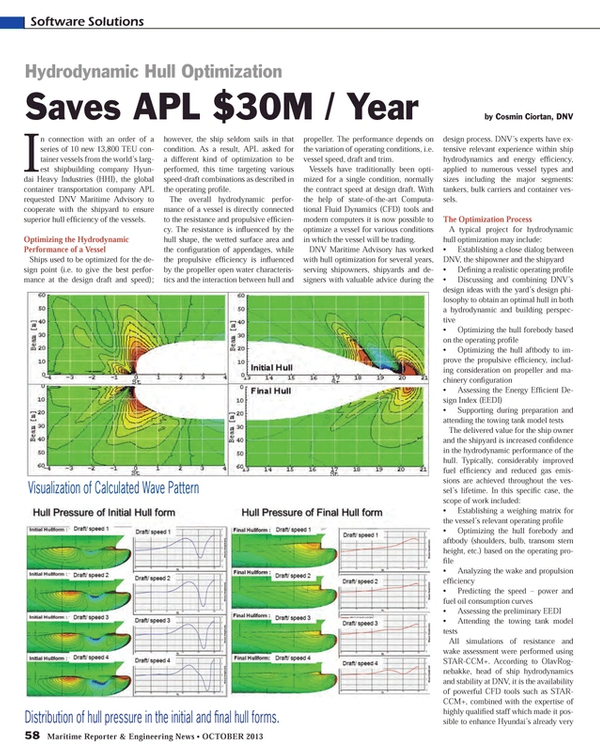