Recent severe storms in the U.K. North Sea have resulted in a number of floating production, storage and offloading vessels (FPSOs) being shut down in order to assess and repair the damage caused. Notwithstanding the possible safety implications for operations crew, oil and gas majors are facing weeks, if not months without a critical asset which in turn, is having a significant impact on future production.

The design and operation of an FPSO in remote locations requires detailed information on the structural response of the vessel within the local environment offshore.  Monitoring of critical components including the risers, hull and mooring lines simultaneously with the local environmental forcing of waves, wind and currents at the site location, provides a valuable insight into the performance and possible extension of the integrity life of the asset.  As new technology is introduced, riser design becomes more sophisticated and extension of design life is required. Also, it becomes increasingly important to monitor an asset’s performance to assist with operational decisions, forensic investigation of marine incidents and the evaluation of design codes.

Over the last few years, an increase in the number of offshore incidents related to FPSOs in the North Sea during extreme storm conditions has resulted in focused attention on the verification of design codes and a review of inspection procedures. With an average mooring failure projected at 8.8 years for an FPSO in the North Sea and the consequential damage this could have on the riser, a number of Joint Industry Partnership (JIP) initiatives have concluded that the management and audit of the FPSO integrity is required. Furthermore, indicative costs resulting in the remediation activities required for a single mooring line alone have been estimated at $3.2m for a North Sea FPSO and many companies believe that insurance premiums are likely to rise due to the number of claims now being made.

As an attractive and flexible option which eliminates the need to lay expensive long-distance pipelines, the number of FPSOs being put into service in remote locations is rising. As such, the complexities of understanding the performance of the vessel in given sea-states and the interaction of the FPSO with the subsea infrastructure, becomes imperative.

Marine monitoring systems have primarily been used to provide real-time information for operational support during production with typical examples of its use being: vessel position (particularly in storm conditions); information on the metocean conditions during operation; production riser tension, buoyancy and stroke and mooring line tension for failure detection.

Furthermore, monitoring systems provide information to verify the design of the asset and provide input into fatigue calculations for mooring lines and risers. Currently, finite mathematical modeling is carried out when designing the riser configuration for the FPSO, but what is often lacking is the robust data to validate the actual local environmental conditions.  Feeding this data into the design process can help to validate the accuracy of the modeling tools being used and reduce uncertainty.

The standard sensors and parameters that should be measured within the system include:

•    Meteorological – the monitoring of the meteorological conditions offshore is critical to ensuring the safe operation of the asset.  In 1981, the Civil Aviation Authority (CAA) and the Helideck Certification Agency (HCA) introduced the CAP 437 standard for the U.K. Continental Shelf and currently recommends that meteorological parameters and motion of the helideck are measured for an FPSO.  Such parameters provide critical operational information which is sent back to shore so that companies planning any crew changes or helicopter operations are fully aware of the weather status on the vessel before dispatch.  Safety of employees is of the upmost importance, therefore companies want to ensure safe take-off and landing conditions

•    Wave monitoring – wave induced loads are the main source of fatigue for FPSO design and wave height is a significant factor to consider for the design of the risers, as well as assessment of mooring fatigue life and hull integrity.  Recording the extreme events in storm conditions also provides valuable input to the marine forensic investigation of any offshore incident

•    Ocean current – Surface currents can impact any offloading operations from the FPSO to the shuttle tankers and influence the response of the risers and moorings, resulting in fatigue loads

•    Position and attitude – measurement of the position of the FPSO is essential in storm periods to understand the vessel response to environmental forcing and the coupling of the resultant fatigue on risers and mooring lines.  The position of the vessel is also critical in the assessment of any marine incident

•    Hull monitoring – stress induced in the deck and hull of an FPSO can be monitored using a series of long base strain gauges positioned in strategic locations on the deck and flare tower.  In addition, pressure sensors installed in the hull provide information on the vertical acceleration of the FPSO

Each of the components mentioned above are likely to involve a number of third party suppliers, therefore the challenge that oil and gas majors are faced with is ensuring they all integrate into one effective monitoring system, to provide a holistic approach and support the assets’ integrity management program.  Correct placement of the sensors on board the FPSO and full integration of the data within a common time base is vital.  By carefully setting up the sensor clocks and sampling frequency during the installation of sensors at strategic locations on the FPSO, companies can use the resultant data set to effectively study the coupled response of the vessel with the environmental and resultant dynamic loading on the risers and mooring lines to study fatigue.

Monitoring of all the different parameters within this common time base can also assist with forensic investigations of marine incidents.  For example, companies want to be able to match the time the mooring line broke with the highest wave that hit the FPSO.  If the clocks on the mooring sensor are different to that of the wave sensor, forensic engineers will not necessarily marry the two together.  Instead of working in isolation, the different parameters must be fully integrated to allow the root cause of the incident to be clearly identified.

Significant advances in technology over the last decade have meant that oil and gas majors can monitor the effect the local environmental conditions have on their critical infrastructure offshore.  Sophisticated sensors on board an FPSO can provide real time information for operational support and provide valuable input into studies on the performance of the FPSO in varying sea states.  However, to be fully effective, oil and gas companies must look at the monitoring of their critical assets holistically with the end user taking an active role in the planning and implementation of an integrated marine monitoring system.  It is vital that data is archived and stored in a common portal to allow engineers and operational teams to make the most of this valuable information.

Only then can they feel confident that the system is indeed fit for purpose and the risks of lost production due to repair or worse, a lengthy shut-down, are minimized.

About the Author
Louise Ledgard  has a P hD in Materials Engineering and Design, a Bachelor’s Degree in Applied Physics and a Masters in Business Administration.  With over 15 years’ experience working within the offshore oil and gas sector, Louise helps clients to identify an optimum solution for their offshore operational and marine engineering requirements. 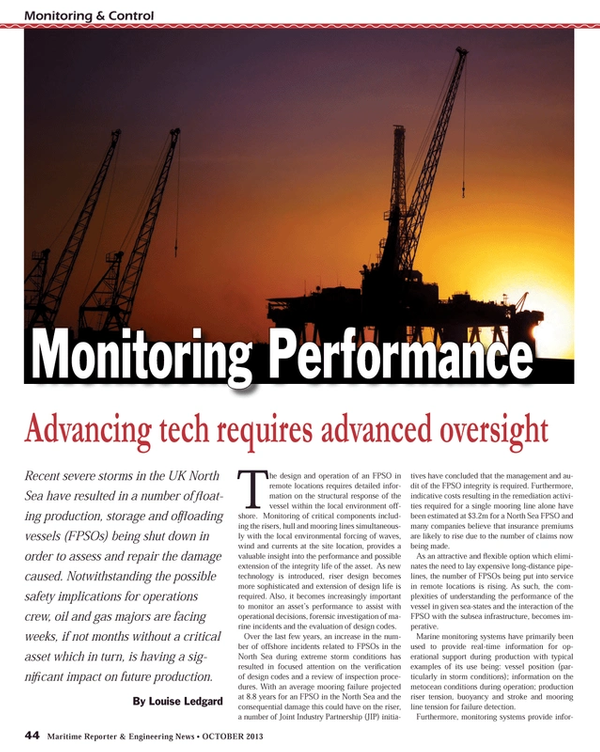