The looming threat of small boats to national security calls into play some innovative options.

Since the horrific terrorist attacks of September 11, 2001 revealed a series of national security vulnerabilities, the U.S. Departments of Defense and Homeland Security have been exploring options to reduce these risks.  One vulnerability that has proven difficult to address is that of an attack on U.S. assets and interests by small boats.  The U.S. Air Force has recently conducted a successful test of its ability to neutralize and eliminate such a threat.
Small boats can carry a variety of weapons, including anti-ship missiles, unguided rockets, guns and suicide charges.  Because of their low costs, small boats can be employed in large or small numbers by any nation or by nongovernmental actors, including terrorists.  Small boats are difficult to locate and track and successful engagement in the marine environment in all weather conditions presents unique challenges.
The Department of Homeland Security (DHS) developed the Small Vessel Security Strategy (SVSS) in April 2008 to address, from its standpoint, the potential exploitation of small vessels by terrorists and smugglers of weapons of mass destruction, narcotics, illegal aliens and contraband.  Small vessels have also been employed by terrorists to deliver waterborne improvised explosive devices (basically the maritime version of a car bomb). The SVSS also recognizes the possible use of a small vessel as a waterborne platform for conducting a stand-off attack (e.g., Man-Portable Air-Defense System [MANPADS] attack).
Following are some incidents that raise concern about future small boat attacks:

•    Late on the night of July 27 2010, as the supertanker M Star was transiting the Strait of Hormuz en route Japan, it was attacked by a small boat carrying a suicide bomber and explosives.  The explosives detonated sufficiently close to the starboard quarter of the tanker to create a large dent in the hull, but the crew suffered no injuries.  The al-Qaeda affiliated group Abdullah Azzam Brigades claimed responsibility for the attack.
•    On August 4, 2005, Turkish authorities arrested Louai Sakka, a senior al-Qaeda operative, when a one-ton bomb he designed detonated prematurely.  He had intended to place the bomb on a yacht and ram a cruise ship carrying U.S. military personnel stationed in Turkey on rest and recreation out of Antalya, Turkey.
•    On April 24, 2004, terrorists using two fishing dhows packed with explosives attacked the Iraqi Khor al-Amaya offshore terminal in the Arabian Gulf, killing one U.S. Coast Guardsman and two U.S. Navy sailors protecting the terminal after they stopped and were preparing to search one of the dhows.
•    On October 5, 2002, an explosive-laded small boat was rammed into the side of the French tanker Limburg off the coast of Yemen.  The hull was penetrated, causing an oil spill and fire.  One crew member was killed and 12 were injured.  The terrorists were affiliated with al-Qaeda.
•    On October 12, 2000, al Qaeda terrorists rammed an explosive-laded small boat into the USS Cole (DDG-67) in the port of Aden, Yemen, causing the deaths of 17 U.S. Navy sailors, injuring another 39, and doing significant damage to the destroyer.

While U.S. Coast Guard and other law enforcement agencies are responsible for deterring small boat attacks by terrorists in the navigable waters of the United States, attacks against U.S. assets and interests on the high seas or overseas may call for a military response.  The U.S. Navy has a variety of capabilities for this possibility, but it can’t be everywhere.  Thus, the U.S. Air Force is also developing the capacity to conduct maritime strike operations against small boats.The test and evaluation phase of the development involves the use of multiple types of live munitions against small boat targets in waters of the Gulf of Mexico for various surface and depth scenarios, to a maximum depth of ten feet.  Management actions are taken to decrease the potential adverse effects on human safety and the environment, including use of safety boats, aircraft and high-definition video cameras to ensure the test area is clear.
Tests are necessary because current weaponeering systems do not accurately model the impact of air-launched weapon detonations on or under water on small boats.  Damage effects of these conditions must be known in order to generate the tactics, techniques, and procedures (TTPs) for USAF strike aircraft to counter small maneuvering maritime targets.  The test objectives are to: (1) generate usable weaponeering data against small boats; (2) develop TTPs to engage small boats in all weather and (3) determine the impact of the TTPs on Combat Air Force (CAF) training.
Maritime strike testing has been identified as a high national defense priority.  The project has been categorized as a Joint Urgent Operational Need (JUON), meaning that, if not addressed immediately, it will seriously endanger personnel or pose a major threat to ongoing operations.
The weapons being tested range from 20-mm and 30-mm machine guns to Hellfire and Maverick missiles to laser-guided Paveway bombs with an explosive weight of up to 945 pounds.
During that testing period, a B-1B Lancer supersonic variable-sweep-wing bomber launched a GBU-10 laser-guided bomb to take out a remotely-controlled mobile surface vehicle.  The GBU-10 has a published accuracy (“circular error probable” in USAF-speak) of 3.6 feet, making it a good weapon against a small target like a boat, although its 945 pound warhead may be more than needed in this scenario.
The Paveway bombs are now available to the military in a GPS-guided version in addition to the laser-guided model, providing increased flexibility for combat commanders.
Like all military weapons systems, one hopes that they will never have to be used in combat, but it is good to know that they are available when and if needed. 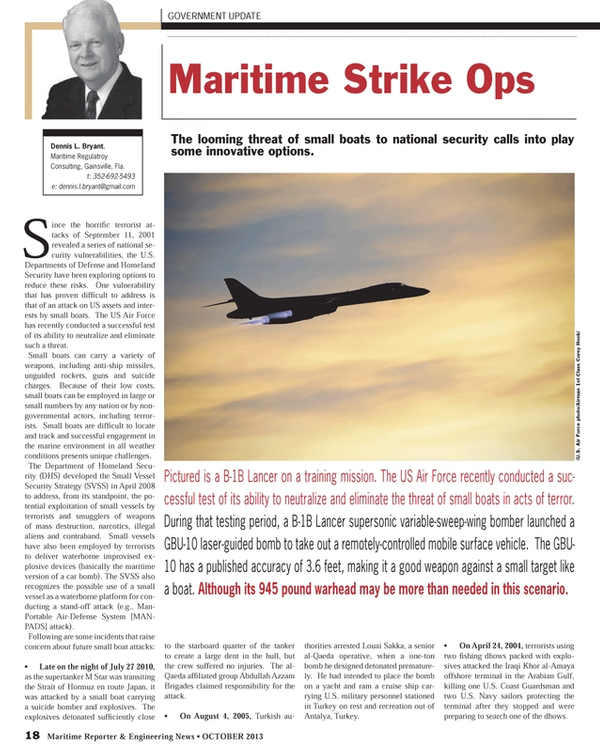