Last month a special pair of towboats were celebrated, as LeBouef Bros. Towing of Houma, La., welcomed to its fleet the MV Karl Senner and MV Dickie Gonsoulin in a festive ceremony at the home of Jon Gonsoulin, President, Lebeouf Bros. Towing. While the boat represent many things – a continued boom in the U.S. energy transport business; a nod to the modern mariner as both are seamlessly outfitted for crew comfort – first and foremost they represent a long-standing and still strong bond between Gonsoulin and Karl Senner LLC.
LeBeouf Bros. Towing and Karl Senner LLC  forged a bond more than 45 years ago when Karl Senner sold the first Reintjes gearbox ever sold in the U.S.  for installation in the United States to LeBeouf Brothers towing, aboard the M/V Mary R, which was a single screw tugboat purchased by LeBeouf Brothers. The Mary R served LeBeouf Bros. well until it was taken out of service in 1981, and is indicative of the company’s strategy to invest in its boats and barges with an eye to the long term: invest a little more up front for more rugged gear and material where it makes sense, and invest in the boat’s interior comfort and amenity to help attract and retain high-value mariners.
To that end, the two new boats are the product of Bourg Dry Dock, LeBeouf’s own newbuild and repair facility conceived by Gonsoulin in 2005, and today able to build four or five boats and about 10 barges per year. The M/V Karl Senner and the M/V Dickie Gonsoulin are Entech & Associates Inc.-designed boats, the second and third of a five boat series, all measuring 95 x 34 feet. MV Karl Senner has Mitsubishi S12-RY2MPTK-3 power and the MV Dickie Gonsoulin is powered by Caterpillar 3512s. All, naturally, will have Reintjes gears. Start to finish, each boat took about 11 months to build, Bartel said, with the Karl delivered in July 2013 and the Dickie, in September 2013. Bartel said there weren’t any unique challenges to building the boats, other than ensuring that they were nice, live-on friendly vessels. 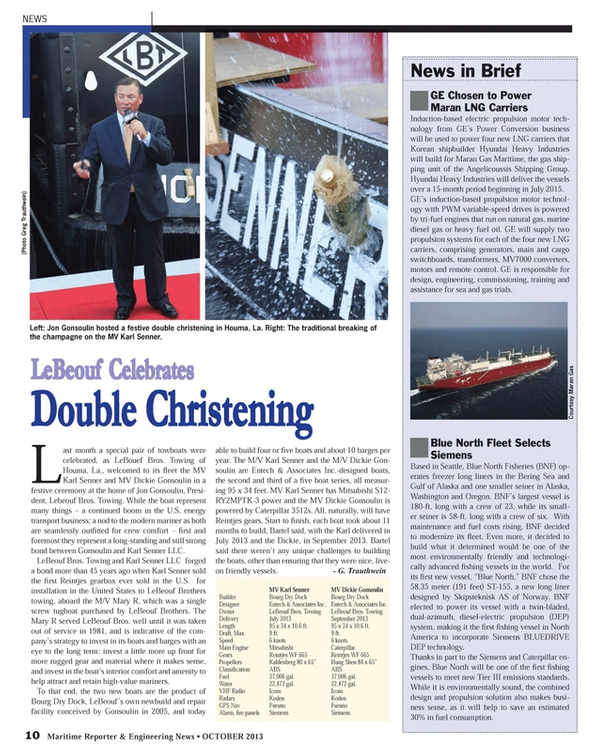