A seafaring nation for more than five centuries, the Netherlands has a deep-rooted nautical history with a strong commercial connection to the seas. Dubbed “the gateway to Europe,” Holland’s location is highly favorable for marine transport, transshipment, trade and service.
A major maritime cluster prospers throughout the nation, primarily along its rivers and shores.

Today the Dutch maritime industry is broad and diverse, ranging from water sports and electronics to shipbuilders and naval architects. Roughly 2.2% of the Netherlands’ population works in the maritime sector, amounting to more than 185,000 workers domestically, with an additional 60,000 workers employed abroad. According to the nation’s Ministry of Infrastructure and the Environment, the Netherlands has seen continuously favorable economic growth over recent years, and the World Economic Forum ranks it among the world’s most commercially competitive countries, making Holland a desirable place for conducting business.

The total fleet operating in merchant shipping and seagoing towage under the flag of the Netherlands in 2012 was 1,033 (roughly 750 merchant ships and more than 200 seagoing towage, offshore and pontoons), marking continued growth since the 2008 crisis. Growth is expected to slow over coming years as newbuildings generally create fewer profits due to the global overcapacity within cargo market.

Like in most countries, shipbuilding output was down in Holland for 2012. According to figures compiled by the Holland Shipbuilding Association, deliveries from Dutch shipyards amounted to 95 seagoing vessels, a total of nearly 335,046 CGT with a value in excess of $1.4 billion. Approximately 58% of the seagoing ships produced in the Netherlands are for export.

The amount of new orders placed during 2012 also reflected the depressed global market. Values decreased 35% compared to 2011. New seagoing orders in 2012 reached 61, totaling 166,471 CGT. The order book at the end of 2012 contained orders for 129 seagoing vessels, totaling approximately 593,893 CGT. The order book represented a value of more than $2.7 billion.

The nation’s shipbuilders, including two of Europe’s largest and most commercially productive (Damen and IHC Merwede) are on the forefront of vessel innovation. In 2012, approximately 90 inland ships were delivered from the Netherlands, including a large number of non-cargo carrying vessels such as river cruisers, dredgers and patrol ships. Combined, the Dutch total output in the specialized inland sector reached nearly 296,699 GT.

And though inland shipping is experiencing global overcapacity, the Holland Shipbuilding Association predicts an upturn in business outlook due to impending infrastructure and maritime regulations that will likely boost inland shipping as an environmentally-friendly means of transporting goods within Holland and Europe.

The luxury yacht industry has also fared well in Holland as the nation has seen increases in average size and value of orders. Last year 18 superyachts were launched by Dutch builders, and the country’s orderbook lists 59 additional yachts worth more than $2.9 billion to be delivered over the next few years.

Working closely with Holland’s shipbuilders, the country also possesses more than 670 companies that supply services and marine equipment. This market is mostly composed of small enterprise companies but also includes a number of international subsidiaries and companies affiliated to larger Dutch shipbuilding groups. With exports as the sectors main driver (accounting for 61% of turnover), together Dutch maritime suppliers neared a collective turnover of $4.6 billion for 2012, an increase from 2011’s $4.48 billion.

Maintenance and repair in the Netherlands focuses largely on complex conversions and refits in most vessel ranges. The Holland Shipbuilders Association reported growth in the division over 13% from 2011 to 2012. This increase in activity is in large part due to larger scale refit and conversion projects as well as increased traffic in the nation’s major ports. 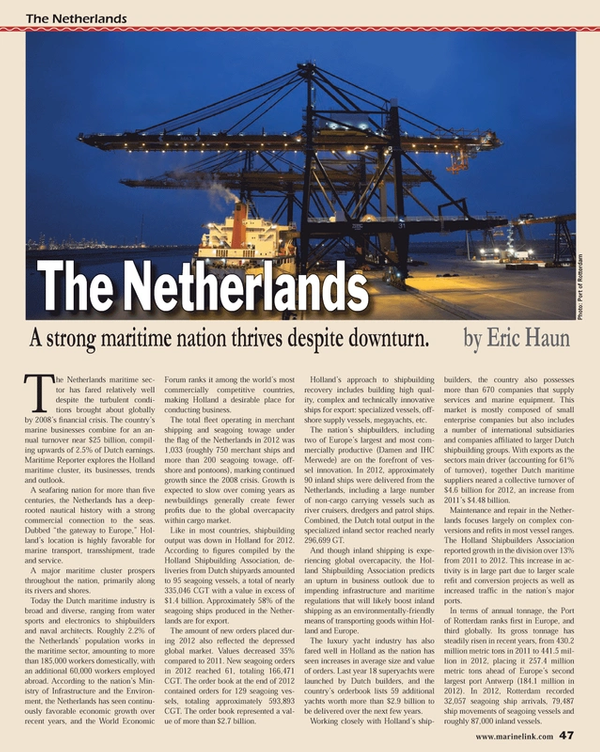