Innovation is a theme rippling through Holland’s robust maritime industry. From ropes and winches to hull and crane design, Dutch marine engineers repeatedly answer the call for safe, efficient marine operations. An exemplary display of genuine Dutch innovation can be found at Barge Master, a company that develops and produces motion compensation platforms designed primarily for cranes and supply barges in the marine offshore and nearshore construction sectors.

When a barge is operating on open water, rotations as small as 2-3 degrees of the barge’s platform on which a crane is placed results in larger movements (4-5 meters) of the crane’s boom tip, therefore causing the hook and load to sway uncontrollably. These crane movements create unpredictable and unsafe working conditions, sometimes forcing lifting operations to cease altogether.

Dutch innovator and entrepreneur Martijn Koppert sought a way to counteract these crane movements so that offshore work could continue despite sea states that would normally inhibit safe operations. His idea was the Barge Master T700 motion compensation platform. The platform uses dynamic positioning to restrain surge, sway and yaw while its three hydraulic actuators compensate heave, roll and pitch. As the barge moves, the platform remains steady in a fixed position.

Full scale tests of its T700 platform have shown compensation percentages upward of 95%, and the platform is effective in wave heights up to two meters and stroke up to 2.5 meters, helping to make operations safer and more efficient.

Manufactured in Holland, Lloyd’s Register certified and DNV reviewed, the T700 Barge Master can carry a 400mT crane (plus the crane’s load), or compensate loads up to 700mT when used as a supply platform.

In addition to its T700 platform, Barge Master has also developed the Barge Master T40 compensation crane. Developed in partnership with Bosch Rexroth, the system is based on the same principle as the Barge Master T700: roll, pitch and heave are compensated, while surge, sway and yaw are fixated.

T40 is capable of compensating an offshore knuckle boom/telescopic boom crane with a capacity of 15mT this makes the crane suitable for applications including the servicing of wind turbines or unmanned oil rigs. The T40 can be integrated into a newbuild or retrofitted to an existing vessel.

The Company
In March 2009, Koppert teamed up with Jan-Paul van den Bos to launch the Barge Master company. Now the company’s sole directors sharing general management responsibilities, Koppert and van den Bos each contribute in their respective areas of expertise. Koppert, formerly CEO at Mammoet, holds years of experience in managing installation and construction projects for SMIT and BAM International and oversees technical aspects, while van den Bos utilizes his financial background from having worked for ExxonMobil and Ernst and Young to manage financial, organizational and legal operations.

Netherlands-based Barge Master, a relatively small company with 15 employees, has its own team of engineers, drafters, commercial and sales staff.

Despite its youth and size, the company is poised for expansion: Barge Master has already secured one contract for each of its systems.

Boskalis to Use Barge Master System in Phase 3 of the Malampaya Project
In July 2013, Boskalis International awarded Barge Master a contract for employment of the T700 motion compensated platform during phase 3 of the Malampaya project where the system will be used during the second half of 2014 for the installation of a permanent bridge between a newly installed depletion compression platform (DCP) and an existing shallow water gas production platform (SWP).

The Malampaya project will be executed by Boskalis for Shell Philippines Exploration B.V. and comprises the installation of an offshore depletion compression platform at the Malampaya gas field, in the Republic of the Philippines. The new multipurpose construction DP2 vessel Ndeavor plays a pivotal role in this project. During phase 3 the Barge Master system will be placed on the Ndeavor.

The permanent bridge, to be installed between the two platforms, will be loaded onto the Barge Master platform and sailed out to the project location. Once on site, the bridge will be held still by the Barge Master so it can be lifted off safely by two temporarily installed lifting arrangements.

Barge Master T40 Purchased for Use in the North Sea
Barge Master announced its second contract in September. The company was awarded a contract from Niestern Sander for employment of its T40 crane to service and maintain gas production platforms in the North Sea from the company’s new walk-to-work vessel. The vessel, which includes the Barge Master system, is to be built for Wagenborg and is scheduled to be ready in the first half of 2015.

Oil and gas platforms have become smaller and more flexible during the last forty years, and they no longer have a resident crew or helicopter pads which means frequent journeys to and from the platform by ship in order to perform maintenance work.

With the new walk-to-work vessel, these operations can be executed in a safer, more efficient and effective manner. The Vessel is unique because multiple functions are combined for the first time. The vessel can accommodate 20 crewmembers and 40 service technicians, chemicals can be stored and transferred safely, and thanks to the T40 Barge Master system materials can be transferred during wave heights of up to three meters. Through the utilization of new technology, NAM is able to safely continue harvesting gas on the North Sea with an extended weather window and less down time. 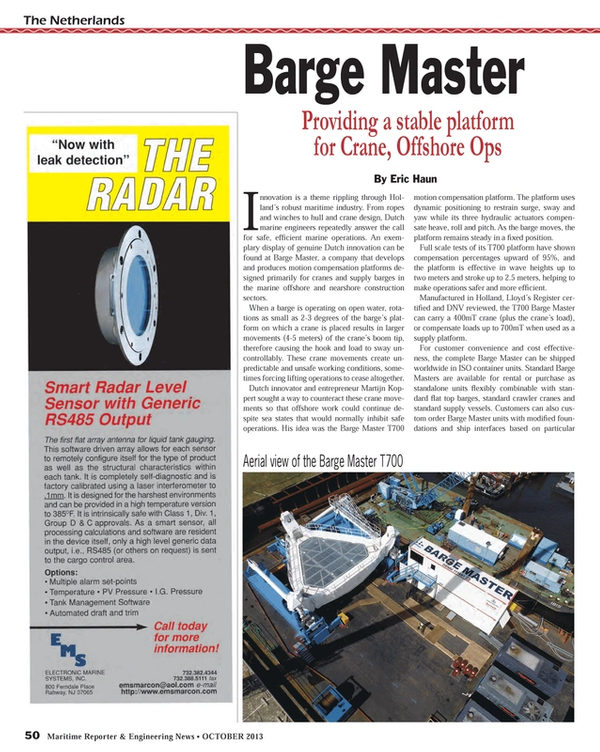