The first Wärtsilä low-speed two-stroke dual-fuel (DF) engine destined for a commercial application has reportedly completed its Factory Acceptance Test (FAT) at a Chinese licensee of Winterthur Gas & Diesel (WinGD), the Switzerland-based designer, developer and licensor of Wärtsilä brand low-speed two-stroke engines.
The engine is a five cylinder, 50 cm bore 5RT-flex50DF built by Yuchai Marine Power Co., Ltd. (YCMP) at its factory in Doumen, Zhuhai City, Guangdong Province, in the South of the People’s Republic of China.
It will power a new “handy-size” LNG carrier, designed by MARIC, in the fleet of Chinese ship-owner and operator Zhejiang Huaxiang Shipping CO., Ltd. The new vessel is under construction at the shipyard of Qidong Fengshun Ship Heavy Industry Co., Ltd., also in the People’s Republic of China. While designed to ocean-going standards, in service the LNG carrier will operate principally in Chinese coastal waters and deliver LNG to terminals in the estuaries of major Chinese rivers. WinGD’s scope-of-supply for this project also includes a gas valve unit (GVU), some ancillary equipment and the commissioning of both the engine and GVU aboard the LNG carrier.
The 125.8 x 22.7 x 7.2 m LNG Carrier will have a rated power of 6000kW at 124 rpm, with a capacity to carry 14,300 cu. m. of LNG. With its Wärtsilä 5RT-flex50DF two-stroke dual-fuel engine burning the “natural boil off gas” (NBOG) which arises through vaporization of a small part of an LNG carrier’s cargo due to the ambient air and sea temperatures and the motion of the ship, the vessel will comply with both the NOx and SOx requirements of the strictest IMO emissions regulations without exhaust after-treatment. The FAT took place on June 2-3, 2015, in the presence of representatives from the classification societies, the ship owners, the shipyard, YCMP and WinGD. Inspection of the engine and selected components according to classification society requirements took place on June 4, 2015. “The system is based on the low-pressure gas admission system proven over more than two decades on Wärtsilä four-stroke DF engines,” said Martin Wernli, CEO Winterthur Gas & Diesel Ltd. (WinGD). “Our product objectives were to reduce both first and operating costs. The 5RT-flex50DF does not require the high-pressure electrically-driven compressor needed by two-stroke engines in which gas is injected under high pressure. Thus, not only can our fuel system be simpler and less expensive, it saves a considerable amount of onboard electrical power, which means that a vessel’s auxiliary generators can be dimensioned smaller. Such savings are, of course, of special interest on smaller LNG carriers such as the 14000 cu. m. vessel which this engine will power.”

WinGD Dual-Fuel Tech
Pioneered by Wärtsilä on medium-speed four-stroke engines in the mid-1990s, WinGD’s low-speed DF marine engines employ the lean burn Otto cycle – i.e. ignition of a lean air-gas mixture by injection of a small amount of liquid fuel – with the gaseous fuel admitted to the cylinders at low pressure via electronically-controlled valves.
The lean burn combustion of gaseous fuels is an enabler of both the low emissions and high efficiencies of WinGD low-speed DF engines. Even without aftertreatment their NOx emissions in gas operation mode are within the limits set by IMO TIER III for vessels operating in Emissions Control Areas (ECAs), while natural gas is virtually sulfur-free, also ensuring compliance with IMO limits for SOx emissions in ECAs.
Moreover, since methane is the major constituent of natural gas and the simplest combination of hydrogen and carbon in the hydrocarbon series, in their gaseous fuel mode, the CO2 emissions of WinGD DF engines are lower than from diesel engines of comparable performance. The lean burn combustion process is also an enabler of the excellent efficiencies attained by modern gas engines. To provide back-up operation for emergencies and voyages where arisings of NBOG are insufficient, the 5RT-flex50DF is equipped with a fully dimensioned liquid fuel system capable of injecting either HFO or distillate fuels (e.g. MDO or MGO). In its 100% liquid fuel mode the 5RT-flex50DF is compliant with IMO TIER II exhaust emissions regulations.
www.wingd.com

(As published in the July 2015 edition of Maritime Reporter & Engineering News - http://magazines.marinelink.com/Magazines/MaritimeReporter) 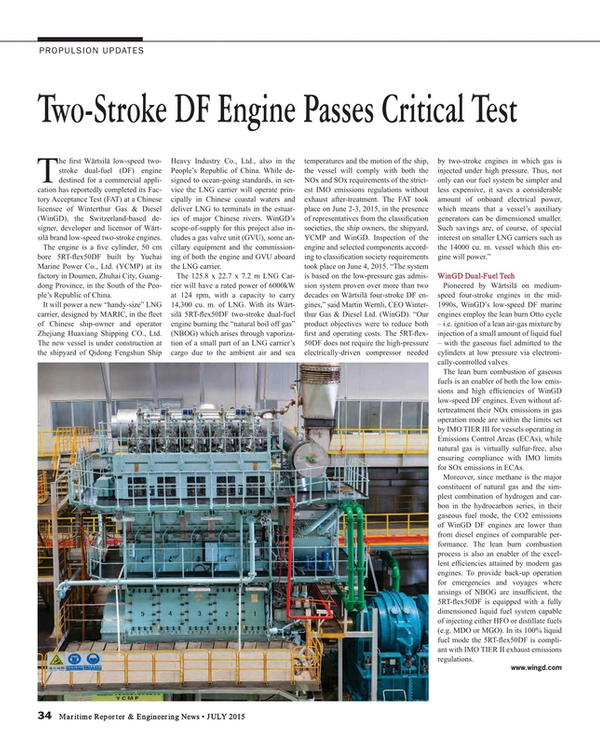