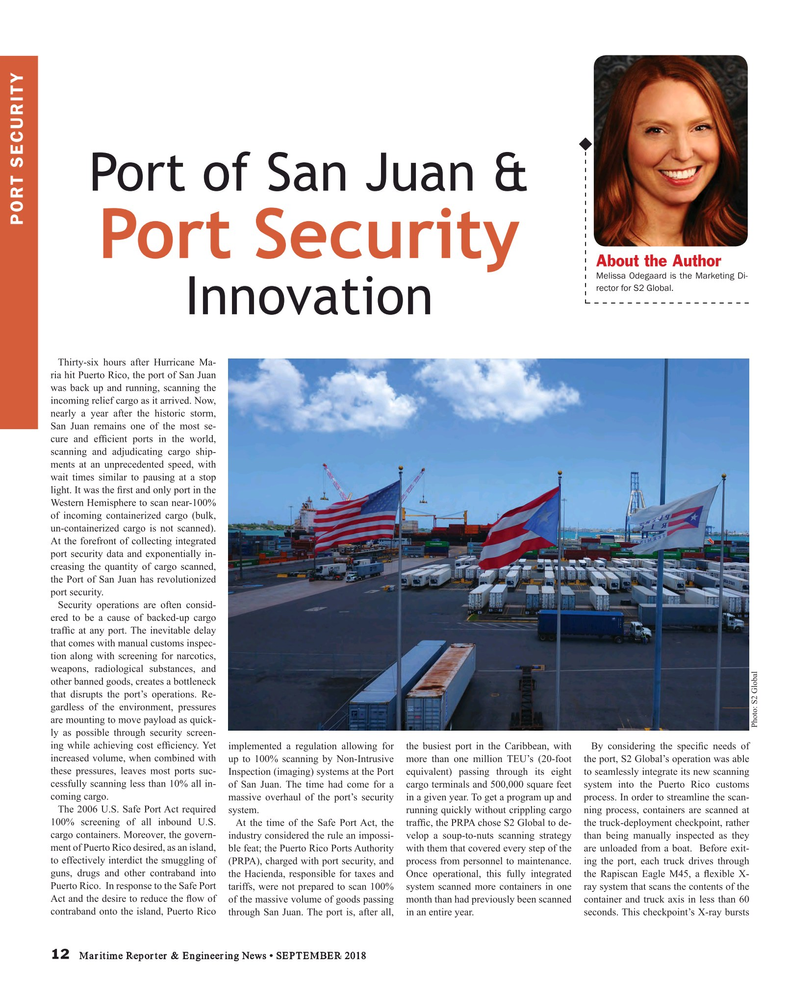 Melissa Odegaard is the Marketing Di- rector for S2 Global.

Thirty-six hours after Hurricane Ma- ria hit Puerto Rico, the port of San Juan was back up and running, scanning the incoming relief cargo as it arrived. Now, nearly a year after the historic storm,

San Juan remains one of the most se- cure and ef? cient ports in the world, scanning and adjudicating cargo ship- ments at an unprecedented speed, with wait times similar to pausing at a stop light. It was the ? rst and only port in the

At the forefront of collecting integrated port security data and exponentially in- creasing the quantity of cargo scanned, the Port of San Juan has revolutionized port security.

Security operations are often consid- ered to be a cause of backed-up cargo traf? c at any port. The inevitable delay that comes with manual customs inspec- tion along with screening for narcotics, weapons, radiological substances, and other banned goods, creates a bottleneck that disrupts the port’s operations. Re- gardless of the environment, pressures are mounting to move payload as quick-

Photo: S2 Global ly as possible through security screen- ing while achieving cost ef? ciency. Yet implemented a regulation allowing for the busiest port in the Caribbean, with By considering the speci? c needs of increased volume, when combined with up to 100% scanning by Non-Intrusive more than one million TEU’s (20-foot the port, S2 Global’s operation was able these pressures, leaves most ports suc- Inspection (imaging) systems at the Port equivalent) passing through its eight to seamlessly integrate its new scanning cessfully scanning less than 10% all in- of San Juan. The time had come for a cargo terminals and 500,000 square feet system into the Puerto Rico customs coming cargo. massive overhaul of the port’s security in a given year. To get a program up and process. In order to streamline the scan-

The 2006 U.S. Safe Port Act required system. running quickly without crippling cargo ning process, containers are scanned at 100% screening of all inbound U.S. At the time of the Safe Port Act, the traf? c, the PRPA chose S2 Global to de- the truck-deployment checkpoint, rather cargo containers. Moreover, the govern- industry considered the rule an impossi- velop a soup-to-nuts scanning strategy than being manually inspected as they ment of Puerto Rico desired, as an island, ble feat; the Puerto Rico Ports Authority with them that covered every step of the are unloaded from a boat. Before exit- to effectively interdict the smuggling of (PRPA), charged with port security, and process from personnel to maintenance. ing the port, each truck drives through guns, drugs and other contraband into the Hacienda, responsible for taxes and Once operational, this fully integrated the Rapiscan Eagle M45, a ? exible X-

Puerto Rico. In response to the Safe Port tariffs, were not prepared to scan 100% system scanned more containers in one ray system that scans the contents of the

Act and the desire to reduce the ? ow of of the massive volume of goods passing month than had previously been scanned container and truck axis in less than 60 contraband onto the island, Puerto Rico through San Juan. The port is, after all, in an entire year. seconds. This checkpoint’s X-ray bursts 12 Maritime Reporter & Engineering News • SEPTEMBER 2018