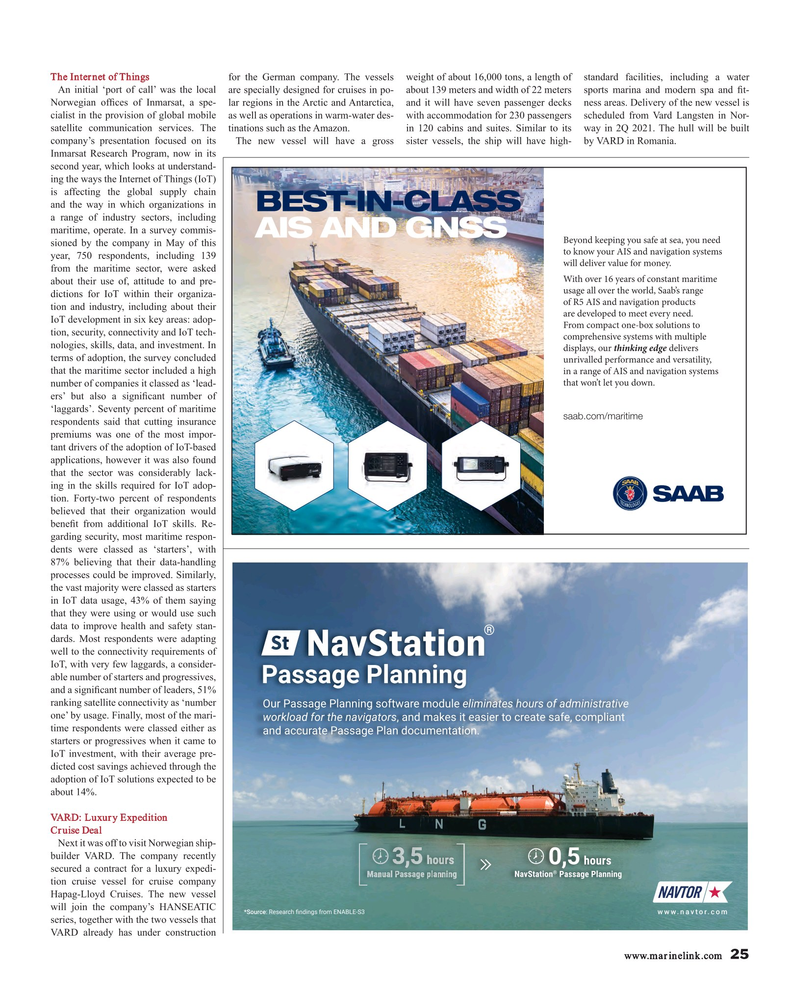 The Internet of Things for the German company. The vessels weight of about 16,000 tons, a length of standard facilities, including a water

An initial ‘port of call’ was the local are specially designed for cruises in po- about 139 meters and width of 22 meters sports marina and modern spa and ? t-

Norwegian of? ces of Inmarsat, a spe- lar regions in the Arctic and Antarctica, and it will have seven passenger decks ness areas. Delivery of the new vessel is cialist in the provision of global mobile as well as operations in warm-water des- with accommodation for 230 passengers scheduled from Vard Langsten in Nor- satellite communication services. The tinations such as the Amazon. in 120 cabins and suites. Similar to its way in 2Q 2021. The hull will be built company’s presentation focused on its The new vessel will have a gross sister vessels, the ship will have high- by VARD in Romania.

Inmarsat Research Program, now in its second year, which looks at understand- ing the ways the Internet of Things (IoT) is affecting the global supply chain and the way in which organizations in a range of industry sectors, including maritime, operate. In a survey commis- sioned by the company in May of this year, 750 respondents, including 139 from the maritime sector, were asked about their use of, attitude to and pre- dictions for IoT within their organiza- tion and industry, including about their

IoT development in six key areas: adop- tion, security, connectivity and IoT tech- nologies, skills, data, and investment. In terms of adoption, the survey concluded that the maritime sector included a high number of companies it classed as ‘lead- ers’ but also a signi? cant number of ‘laggards’. Seventy percent of maritime respondents said that cutting insurance premiums was one of the most impor- tant drivers of the adoption of IoT-based applications, however it was also found that the sector was considerably lack- ing in the skills required for IoT adop- tion. Forty-two percent of respondents believed that their organization would bene? t from additional IoT skills. Re- garding security, most maritime respon- dents were classed as ‘starters’, with 87% believing that their data-handling processes could be improved. Similarly, the vast majority were classed as starters in IoT data usage, 43% of them saying that they were using or would use such data to improve health and safety stan- ® ® dards. Most respondents were adapting well to the connectivity requirements of

IoT, with very few laggards, a consider- able number of starters and progressives,

Our Passage Planning software module eliminates hours of administrative one’ by usage. Finally, most of the mari- workload for the navigators, and makes it easier to create safe, compliant time respondents were classed either as and accurate Passage Plan documentation.

starters or progressives when it came to

IoT investment, with their average pre- dicted cost savings achieved through the adoption of IoT solutions expected to be about 14%.

Next it was off to visit Norwegian ship- builder VARD. The company recently secured a contract for a luxury expedi- tion cruise vessel for cruise company

Hapag-Lloyd Cruises. The new vessel will join the company’s HANSEATIC *Source6IWIEVGL?RHMRKWJVSQ)2%&0)7 www.navtor.com series, together with the two vessels that

VARD already has under construction www.marinelink.com 25