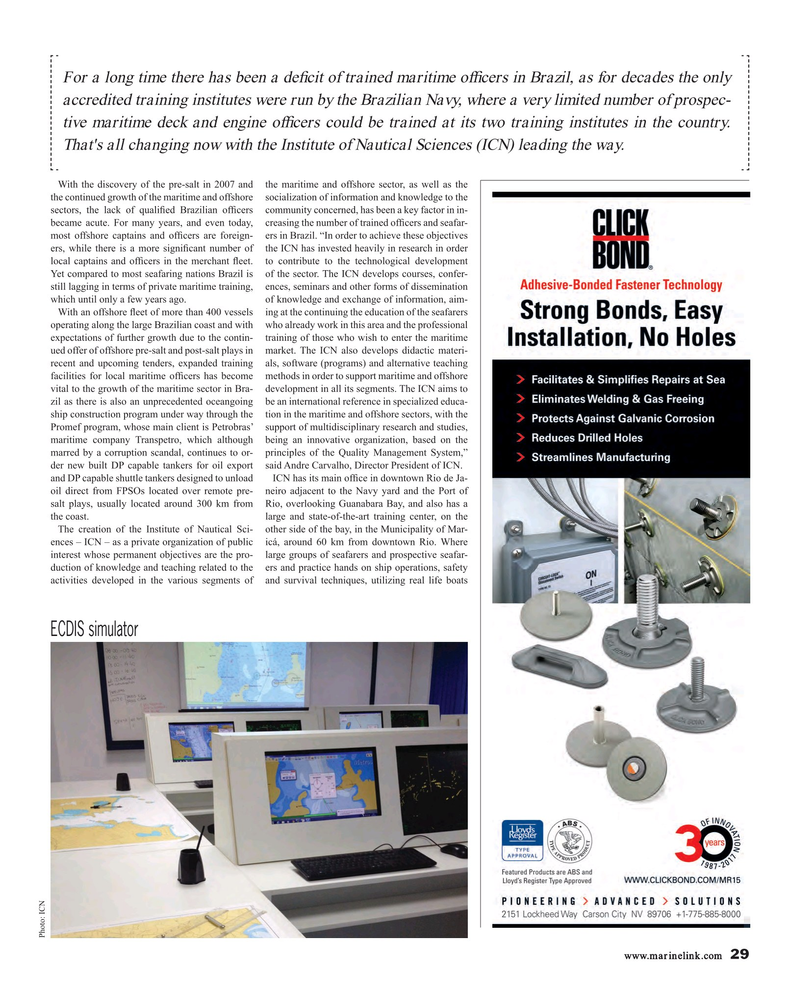 For a long time there has been a de? cit of trained maritime of? cers in Brazil, as for decades the only accredited training institutes were run by the Brazilian Navy, where a very limited number of prospec- tive maritime deck and engine of? cers could be trained at its two training institutes in the country.

That's all changing now with the Institute of Nautical Sciences (ICN) leading the way.

With the discovery of the pre-salt in 2007 and the maritime and offshore sector, as well as the the continued growth of the maritime and offshore socialization of information and knowledge to the sectors, the lack of quali? ed Brazilian of? cers community concerned, has been a key factor in in- became acute. For many years, and even today, creasing the number of trained of? cers and seafar- most offshore captains and of? cers are foreign- ers in Brazil. “In order to achieve these objectives ers, while there is a more signi? cant number of the ICN has invested heavily in research in order local captains and of? cers in the merchant ? eet. to contribute to the technological development

Yet compared to most seafaring nations Brazil is of the sector. The ICN develops courses, confer- still lagging in terms of private maritime training, ences, seminars and other forms of dissemination which until only a few years ago. of knowledge and exchange of information, aim-

With an offshore ? eet of more than 400 vessels ing at the continuing the education of the seafarers operating along the large Brazilian coast and with who already work in this area and the professional expectations of further growth due to the contin- training of those who wish to enter the maritime ued offer of offshore pre-salt and post-salt plays in market. The ICN also develops didactic materi- recent and upcoming tenders, expanded training als, software (programs) and alternative teaching facilities for local maritime of? cers has become methods in order to support maritime and offshore vital to the growth of the maritime sector in Bra- development in all its segments. The ICN aims to zil as there is also an unprecedented oceangoing be an international reference in specialized educa- ship construction program under way through the tion in the maritime and offshore sectors, with the

Promef program, whose main client is Petrobras’ support of multidisciplinary research and studies, maritime company Transpetro, which although being an innovative organization, based on the marred by a corruption scandal, continues to or- principles of the Quality Management System,” der new built DP capable tankers for oil export said Andre Carvalho, Director President of ICN. and DP capable shuttle tankers designed to unload ICN has its main of? ce in downtown Rio de Ja- oil direct from FPSOs located over remote pre- neiro adjacent to the Navy yard and the Port of salt plays, usually located around 300 km from Rio, overlooking Guanabara Bay, and also has a the coast. large and state-of-the-art training center, on the

The creation of the Institute of Nautical Sci- other side of the bay, in the Municipality of Mar- ences – ICN – as a private organization of public icá, around 60 km from downtown Rio. Where interest whose permanent objectives are the pro- large groups of seafarers and prospective seafar- duction of knowledge and teaching related to the ers and practice hands on ship operations, safety activities developed in the various segments of and survival techniques, utilizing real life boats