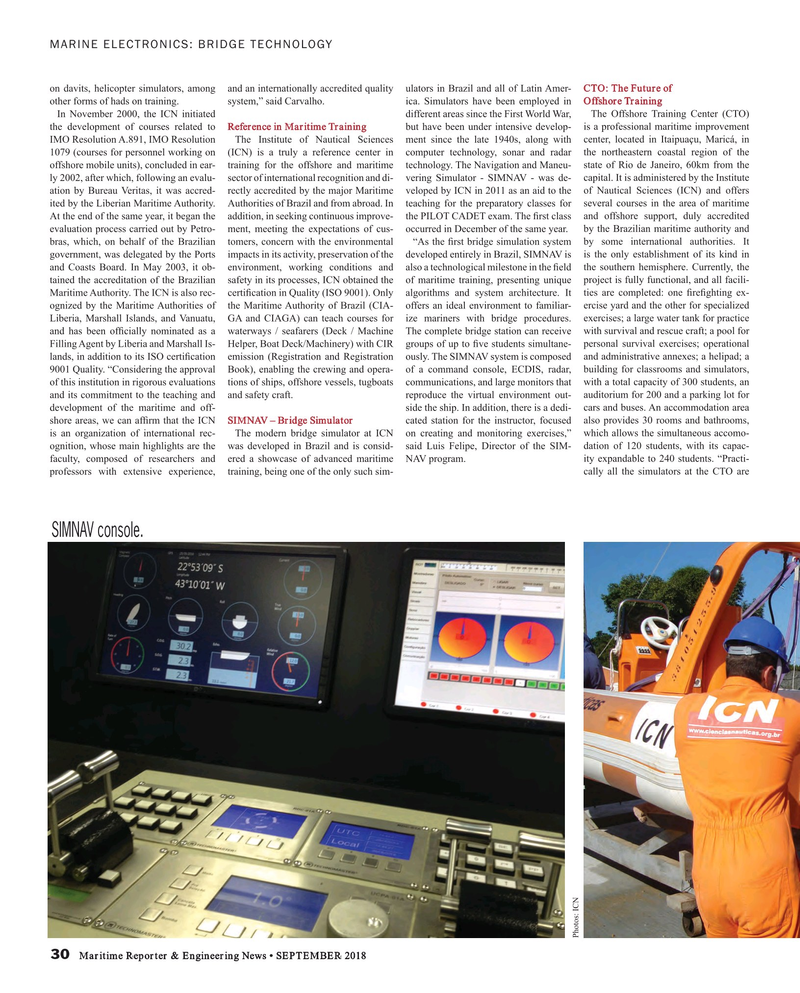 MARINE ELECTRONICS: BRIDGE TECHNOLOGY on davits, helicopter simulators, among and an internationally accredited quality ulators in Brazil and all of Latin Amer- CTO: The Future of other forms of hads on training. system,” said Carvalho. ica. Simulators have been employed in Offshore Training

In November 2000, the ICN initiated different areas since the First World War, The Offshore Training Center (CTO) the development of courses related to Reference in Maritime Training but have been under intensive develop- is a professional maritime improvement

IMO Resolution A.891, IMO Resolution The Institute of Nautical Sciences ment since the late 1940s, along with center, located in Itaipuaçu, Maricá, in 1079 (courses for personnel working on (ICN) is a truly a reference center in computer technology, sonar and radar the northeastern coastal region of the offshore mobile units), concluded in ear- training for the offshore and maritime technology. The Navigation and Maneu- state of Rio de Janeiro, 60km from the ly 2002, after which, following an evalu- sector of international recognition and di- vering Simulator - SIMNAV - was de- capital. It is administered by the Institute ation by Bureau Veritas, it was accred- rectly accredited by the major Maritime veloped by ICN in 2011 as an aid to the of Nautical Sciences (ICN) and offers ited by the Liberian Maritime Authority. Authorities of Brazil and from abroad. In teaching for the preparatory classes for several courses in the area of maritime

At the end of the same year, it began the addition, in seeking continuous improve- the PILOT CADET exam. The ? rst class and offshore support, duly accredited evaluation process carried out by Petro- ment, meeting the expectations of cus- occurred in December of the same year. by the Brazilian maritime authority and bras, which, on behalf of the Brazilian tomers, concern with the environmental “As the ? rst bridge simulation system by some international authorities. It government, was delegated by the Ports impacts in its activity, preservation of the developed entirely in Brazil, SIMNAV is is the only establishment of its kind in and Coasts Board. In May 2003, it ob- environment, working conditions and also a technological milestone in the ? eld the southern hemisphere. Currently, the tained the accreditation of the Brazilian safety in its processes, ICN obtained the of maritime training, presenting unique project is fully functional, and all facili-

Liberia, Marshall Islands, and Vanuatu, GA and CIAGA) can teach courses for ize mariners with bridge procedures. exercises; a large water tank for practice and has been of? cially nominated as a waterways / seafarers (Deck / Machine The complete bridge station can receive with survival and rescue craft; a pool for

Filling Agent by Liberia and Marshall Is- Helper, Boat Deck/Machinery) with CIR groups of up to ? ve students simultane- personal survival exercises; operational lands, in addition to its ISO certi? cation emission (Registration and Registration ously. The SIMNAV system is composed and administrative annexes; a helipad; a 9001 Quality. “Considering the approval Book), enabling the crewing and opera- of a command console, ECDIS, radar, building for classrooms and simulators, of this institution in rigorous evaluations tions of ships, offshore vessels, tugboats communications, and large monitors that with a total capacity of 300 students, an and its commitment to the teaching and and safety craft. reproduce the virtual environment out- auditorium for 200 and a parking lot for development of the maritime and off- side the ship. In addition, there is a dedi- cars and buses. An accommodation area shore areas, we can af? rm that the ICN SIMNAV – Bridge Simulator cated station for the instructor, focused also provides 30 rooms and bathrooms, is an organization of international rec- The modern bridge simulator at ICN on creating and monitoring exercises,” which allows the simultaneous accomo- ognition, whose main highlights are the was developed in Brazil and is consid- said Luis Felipe, Director of the SIM- dation of 120 students, with its capac- faculty, composed of researchers and ered a showcase of advanced maritime NAV program. ity expandable to 240 students. “Practi- professors with extensive experience, training, being one of the only such sim- cally all the simulators at the CTO are