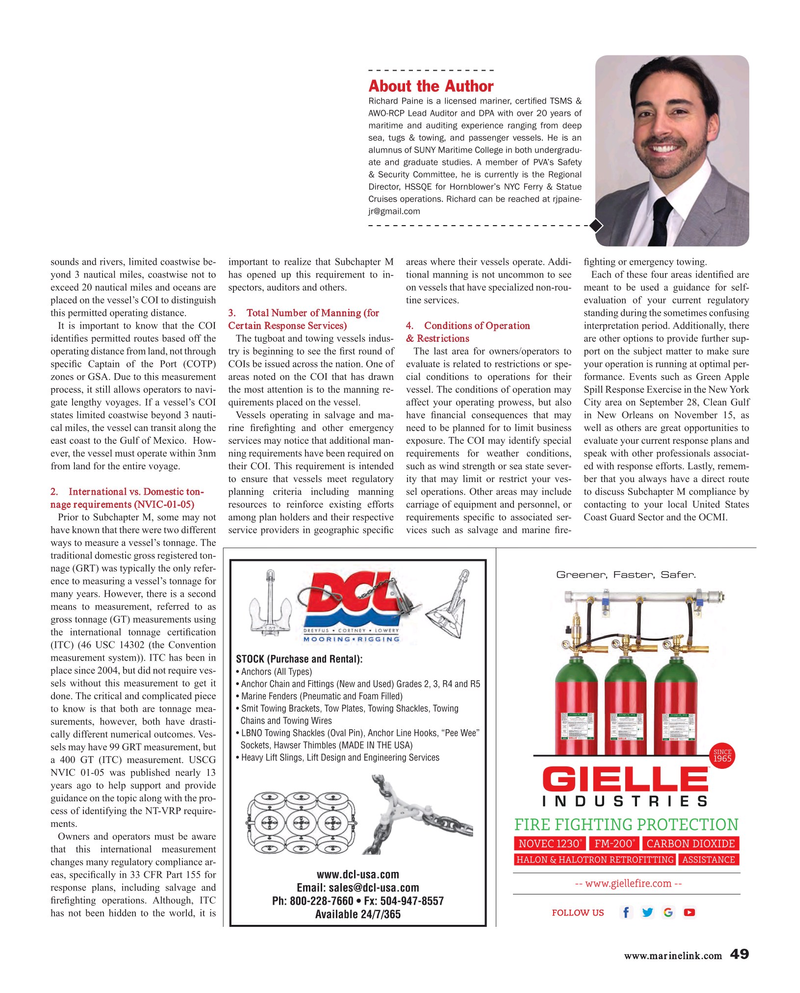 AWO-RCP Lead Auditor and DPA with over 20 years of maritime and auditing experience ranging from deep sea, tugs & towing, and passenger vessels. He is an alumnus of SUNY Maritime College in both undergradu- ate and graduate studies. A member of PVA’s Safety & Security Committee, he is currently is the Regional

Cruises operations. Richard can be reached at rjpaine- jr@gmail.com sounds and rivers, limited coastwise be- important to realize that Subchapter M areas where their vessels operate. Addi- ? ghting or emergency towing. yond 3 nautical miles, coastwise not to has opened up this requirement to in- tional manning is not uncommon to see Each of these four areas identi? ed are exceed 20 nautical miles and oceans are spectors, auditors and others. on vessels that have specialized non-rou- meant to be used a guidance for self- placed on the vessel’s COI to distinguish tine services. evaluation of your current regulatory this permitted operating distance. 3. Total Number of Manning (for standing during the sometimes confusing

It is important to know that the COI Certain Response Services) 4. Conditions of Operation interpretation period. Additionally, there identi? es permitted routes based off the The tugboat and towing vessels indus- & Restrictions are other options to provide further sup- operating distance from land, not through try is beginning to see the ? rst round of The last area for owners/operators to port on the subject matter to make sure speci? c Captain of the Port (COTP) COIs be issued across the nation. One of evaluate is related to restrictions or spe- your operation is running at optimal per- zones or GSA. Due to this measurement areas noted on the COI that has drawn cial conditions to operations for their formance. Events such as Green Apple process, it still allows operators to navi- the most attention is to the manning re- vessel. The conditions of operation may Spill Response Exercise in the New York gate lengthy voyages. If a vessel’s COI quirements placed on the vessel. affect your operating prowess, but also City area on September 28, Clean Gulf states limited coastwise beyond 3 nauti- Vessels operating in salvage and ma- have ? nancial consequences that may in New Orleans on November 15, as cal miles, the vessel can transit along the rine ? re? ghting and other emergency need to be planned for to limit business well as others are great opportunities to east coast to the Gulf of Mexico. How- services may notice that additional man- exposure. The COI may identify special evaluate your current response plans and ever, the vessel must operate within 3nm ning requirements have been required on requirements for weather conditions, speak with other professionals associat- from land for the entire voyage. their COI. This requirement is intended such as wind strength or sea state sever- ed with response efforts. Lastly, remem- to ensure that vessels meet regulatory ity that may limit or restrict your ves- ber that you always have a direct route 2. International vs. Domestic ton- planning criteria including manning sel operations. Other areas may include to discuss Subchapter M compliance by nage requirements (NVIC-01-05) resources to reinforce existing efforts carriage of equipment and personnel, or contacting to your local United States

Prior to Subchapter M, some may not among plan holders and their respective requirements speci? c to associated ser- Coast Guard Sector and the OCMI. have known that there were two different service providers in geographic speci? c vices such as salvage and marine ? re- ways to measure a vessel’s tonnage. The traditional domestic gross registered ton- nage (GRT) was typically the only refer-

ence to measuring a vessel’s tonnage for many years. However, there is a second means to measurement, referred to as gross tonnage (GT) measurements using the international tonnage certi? cation (ITC) (46 USC 14302 (the Convention measurement system)). ITC has been in

STOCK (Purchase and Rental): place since 2004, but did not require ves- s