The latest lifeboat to join the fleet of the Royal National Lifeboat Institution, the main sea rescue service in the UK and Ireland, is the waterjet-propelled Shannon class, which the organization says is its most agile and maneuverable all-weather lifeboat yet to be deployed. Designed entirely in-house by RNLI engineers, cutting-edge technology has been used in this new boat to meet modern-day rescue service demands following the lead taken with the RNLI’s introduction of the Shannon’s sister lifeboat class, the Tamar, in 2005.

In 2013, the Royal National Lifeboat Institution introduced the Shannon class lifeboat to meet the modern-day demands facing a sea rescue service. At 13 meters long and weighing 18 tonnes, the Shannon is the smallest of the RNLI’s all-weather lifeboats and, with an operational lifetime of 25 years, is expected to provide lifesaving cover around the coasts of the UK and Ireland for the foreseeable future: its hull and wheelhouse have a life expectancy of 50 years, thereby enabling the boat’s lifetime to be extended beyond 25 years by having it undergo a refit.

The Shannon is self-righting and can stay at sea for up to 10 hours in extreme conditions. The boat’s hull shape was designed specifically to reduce the vertical and transverse slamming forces that affect boats in high seas, with a narrow bow that cuts through water and a wide aft to provide stability. Its hull, deck and wheelhouse are constructed of composite materials, predominantly an epoxy resin film infusion glass sandwich construction, carbon fiber being employed in areas of the boat that are under high load.

Integrated systems management
Both the Shannon and its larger sister, the Tamar, are fitted with a Systems and Information Management System, an electronic integrated bridge system that allows the crew to monitor, operate and control many of the lifeboat’s functions such as the navigation of the lifeboat, including direction finding, radar and charting; radio communications and CCTV; and the boat’s mechanics, including the engines, bilge and electrical systems, directly. Crews can perform these functions while seated in shock-absorbing seats, thus improving crew safety, and SIMS also promotes better task-sharing between crew members. The SIMS now used in the Shannon class boat was developed jointly by the RNLI and software and solutions provider SCISYS and communication solutions specialist Savox. The six SIMS workstations on board the Tamar and Shannon boats are located at the Coxswain, Helm, Navigator 1, Navigator 2, Mechanic, and Upper Steering Position (USP) crew positions: the first five of these positions are located within the wheelhouse: the USP is up on deck. 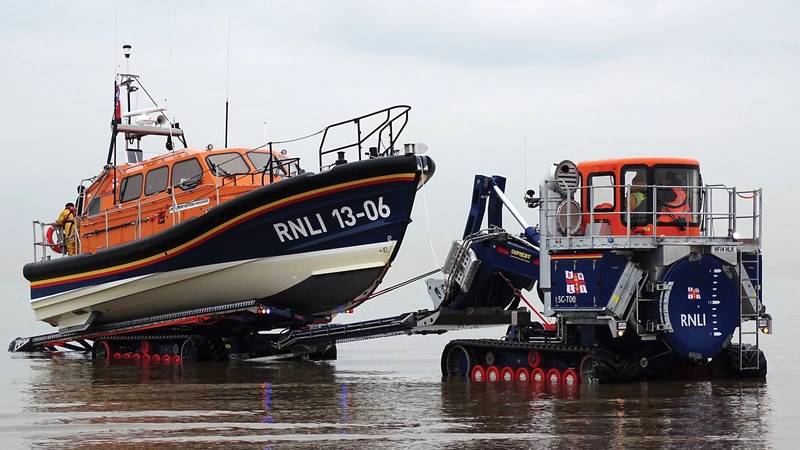 The RNLI has also introduced a new launch and recovery tractor, designed in conjunction with high-mobility-vehicles specialist Supacat Ltd, specifically for use with the Shannon. It acts as a mobile slipway.  Pictured is the Hoylake, UK Shannon class lifeboat being recovered from the sea. (Photo: RNLI/Dave James)
Launch and recovery system

A special feature of the Shannon lifeboat is that it was designed to be launched and recovered from a beach via a new faster and safer launch and recovery system: the vessel can also be launched from a slipway or it can lie afloat. The RNLI has also introduced a new launch and recovery tractor, designed in conjunction with high-mobility-vehicles specialist Supacat Ltd, specifically for use with the Shannon. It acts as a mobile slipway: it can be driven directly onto the beach for recovery, a major advantage for lifeboat stations without harbors, slipways or davit systems. Powered by a 450 hp engine, the 37-tonne tractor is able to carry an 18-tonne Shannon over rough beach terrain, including steep shelving shingle or wet, sticky sand, and can safely launch the lifeboat in up to 2.4 meters of water. In addition, the tractor is watertight and can be completely submerged in high-tide water up to 9 meters deep before being retrieved at low tide.

Speed and maneuverability
Two Scania D13 650 hp engines give the Shannon a top speedof 25 knots, making it almost 50 percent faster than the RNLI’s older Mersey class vessels. The engines each have a 1,370-liter fuel tank, and refuelling can take place at rates of 200 liters per minute. Its twin Hamilton HJ 364 waterjets provide propulsion that makes the Shannon the most agile and maneuverable all-weather lifeboat in the RNLI fleet and give the boat its ability to operate in shallow waters and be intentionally beached, thus providing broad operational versatility.
The Shannon will gradually replace the RNLI’s Mersey and Tyne class lifeboats. Once rolled out, the whole all-weather lifeboat fleet will be capable of 25 knots. The Shannon is not only fast but also highly maneuverable: “The maneuvrability of a jet-driven boat is phenomenal – it really has to be seen to be believed. The launch and recovery equipment helps us get safely back to shore, no matter what the conditions,” said Trevor Bunney, Mechanic at RNLI Dungeness Lifeboat Station.
Rodney Burge, the RNLI’s Lifeboat Operations Manager, commented: “We have all been very impressed with the Shannon – it’s a completely new concept in life boating. When I started volunteering with the RNLI 45 years ago, we had a Watson class lifeboat that had a top speed of around 7 knots and no radar. This boat is more than three times as fast but still feels incredibly smooth in the water, even at top speed.” 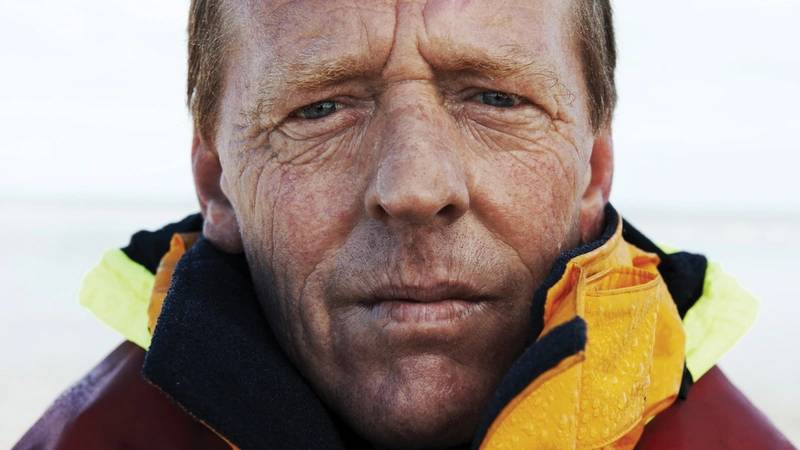 Dungeness RNLI mechanic Trevor Bunney: “The maneuverability of a jet-driven boat is phenomenal.” (Photo: RNLI/Nigel Millard)All-weather Lifeboat Center
The first Shannon class lifeboat was named Jock and Annie Slater, after a former RNLI Chairman, Sir Jock Slater, and his wife, Lady Annie Slater, and entered service at Dungeness Lifeboat Station in the south-east of England in 2013. The Jock and Annie Slater was the first lifeboat to be built at the RNLI’s All-weather Lifeboat Centre in Poole, Dorset, UK, which opened in 2015. The Center carries out the whole boatbuilding process under one roof and aims to build at least six Shannon class lifeboats per year to produce a fleet of at least 50 such vessels.

The RNLI said its All-weather Lifeboat Center allows the organization to govern its own destiny and that because in the future there will be fewer specialist suppliers that will be able to meet its particular needs, the Centre will mitigate the risks to its lifeboat-building supply chain, give it greater control over quality, and make cost reductions of at least $4 million per year. Facilities at the Center include two boat halls with flexible bays for manufacturing and maintaining lifeboats; a component manufacturing area; a launch, recovery and boat storage area; a paint preparation area with built-in extraction system and heat curing facility; a workshop for supporting the RNLI’s inshore training fleet; office facilities; tools and equipment storage facilities; and a visitors’ viewing area.
The UK stations of Dungeness in south-east England and Exmouth in the south-west of the country were the first to receive Shannon class lifeboats: the new class is now gradually being introduced across the UK and Ireland: at present, ten RNLI stations have a Shannon class lifeboat and there are four Shannon class boats in the organization’s relief fleet. 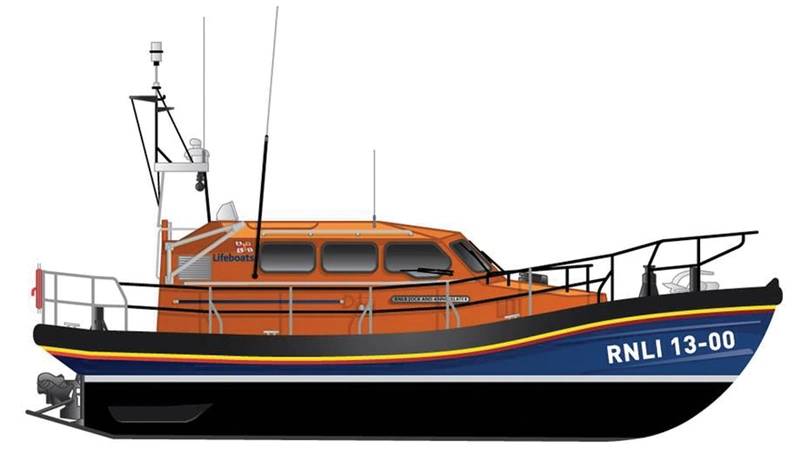 The Shannon Class lifeboat is being gradually introduced into the RNLI fleet to replace older vessels such as the Mersey and Tyne class boats which are becoming obsolete. (Graphic: RNLI) 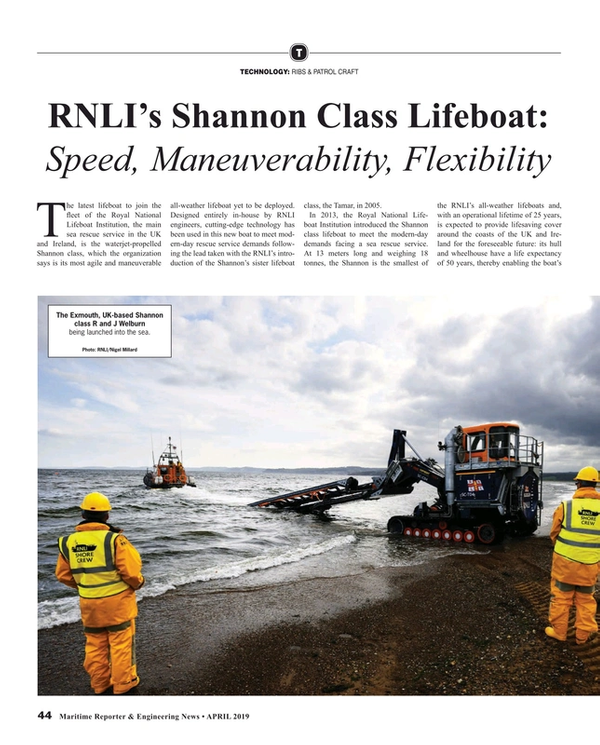