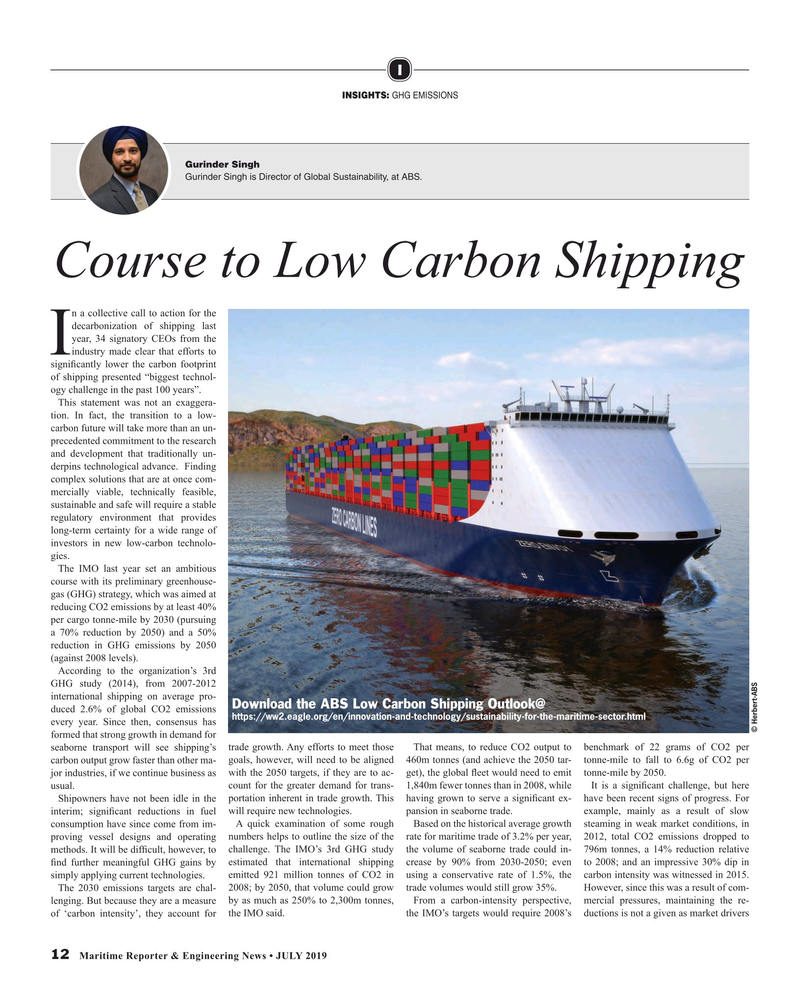 Gurinder Singh is Director of Global Sustainability, at ABS.

Course to Low Carbon Shipping n a collective call to action for the decarbonization of shipping last year, 34 signatory CEOs from the

Iindustry made clear that efforts to signi? cantly lower the carbon footprint of shipping presented “biggest technol- ogy challenge in the past 100 years”.

This statement was not an exaggera- tion. In fact, the transition to a low- carbon future will take more than an un- precedented commitment to the research and development that traditionally un- derpins technological advance. Finding complex solutions that are at once com- mercially viable, technically feasible, sustainable and safe will require a stable regulatory environment that provides long-term certainty for a wide range of investors in new low-carbon technolo- gies.

The IMO last year set an ambitious course with its preliminary greenhouse- gas (GHG) strategy, which was aimed at reducing CO2 emissions by at least 40% per cargo tonne-mile by 2030 (pursuing a 70% reduction by 2050) and a 50% reduction in GHG emissions by 2050 (against 2008 levels).

According to the organization’s 3rd

Download the ABS Low Carbon Shipping Outlook@ duced 2.6% of global CO2 emissions https://ww2.eagle.org/en/innovation-and-technology/sustainability-for-the-maritime-sector.html every year. Since then, consensus has © Herbert-ABS formed that strong growth in demand for seaborne transport will see shipping’s trade growth. Any efforts to meet those That means, to reduce CO2 output to benchmark of 22 grams of CO2 per carbon output grow faster than other ma- goals, however, will need to be aligned 460m tonnes (and achieve the 2050 tar- tonne-mile to fall to 6.6g of CO2 per jor industries, if we continue business as with the 2050 targets, if they are to ac- get), the global ? eet would need to emit tonne-mile by 2050.

usual. count for the greater demand for trans- 1,840m fewer tonnes than in 2008, while It is a signi? cant challenge, but here

Shipowners have not been idle in the portation inherent in trade growth. This having grown to serve a signi? cant ex- have been recent signs of progress. For interim; signi? cant reductions in fuel will require new technologies. pansion in seaborne trade. example, mainly as a result of slow consumption have since come from im- A quick examination of some rough Based on the historical average growth steaming in weak market conditions, in proving vessel designs and operating numbers helps to outline the size of the rate for maritime trade of 3.2% per year, 2012, total CO2 emissions dropped to methods. It will be dif? cult, however, to challenge. The IMO’s 3rd GHG study the volume of seaborne trade could in- 796m tonnes, a 14% reduction relative ? nd further meaningful GHG gains by estimated that international shipping crease by 90% from 2030-2050; even to 2008; and an impressive 30% dip in simply applying current technologies. emitted 921 million tonnes of CO2 in using a conservative rate of 1.5%, the carbon intensity was witnessed in 2015.

The 2030 emissions targets are chal- 2008; by 2050, that volume could grow trade volumes would still grow 35%. However, since this was a result of com- lenging. But because they are a measure by as much as 250% to 2,300m tonnes, From a carbon-intensity perspective, mercial pressures, maintaining the re- of ‘carbon intensity’, they account for the IMO said. the IMO’s targets would require 2008’s ductions is not a given as market drivers 12 Maritime Reporter & Engineering News • JULY 2019