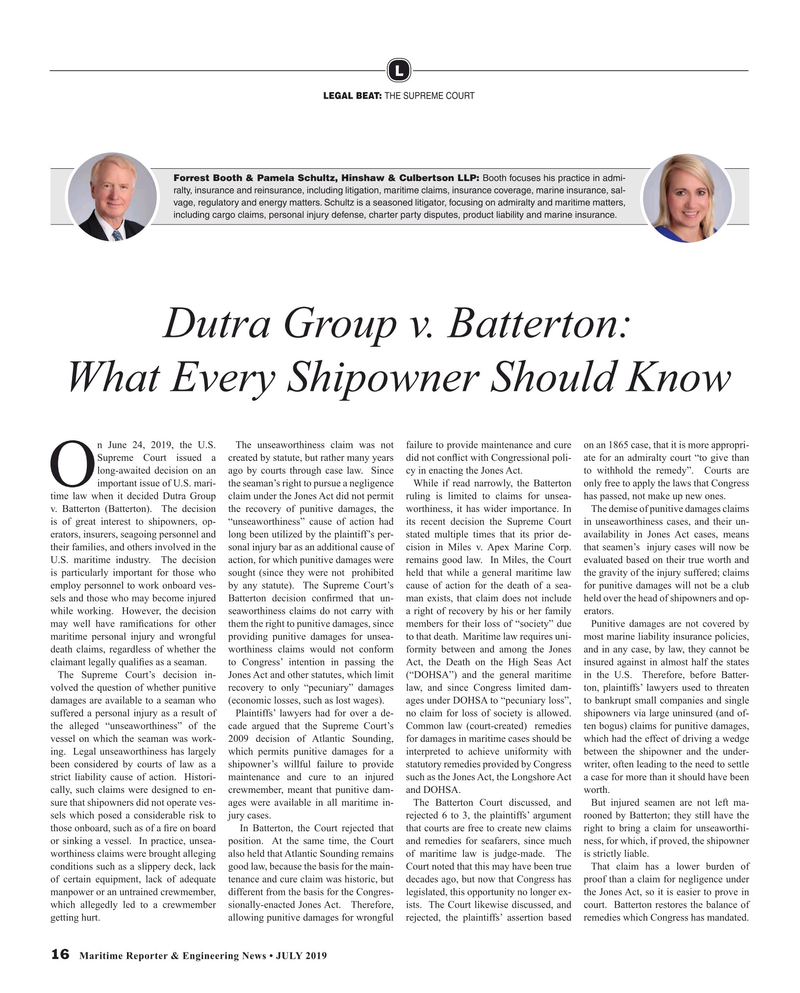 What Every Shipowner Should Know n June 24, 2019, the U.S. The unseaworthiness claim was not failure to provide maintenance and cure on an 1865 case, that it is more appropri-

Supreme Court issued a created by statute, but rather many years did not con? ict with Congressional poli- ate for an admiralty court “to give than long-awaited decision on an ago by courts through case law. Since cy in enacting the Jones Act. to withhold the remedy”. Courts are

Oimportant issue of U.S. mari- the seaman’s right to pursue a negligence While if read narrowly, the Batterton only free to apply the laws that Congress time law when it decided Dutra Group claim under the Jones Act did not permit ruling is limited to claims for unsea- has passed, not make up new ones. v. Batterton (Batterton). The decision the recovery of punitive damages, the worthiness, it has wider importance. In The demise of punitive damages claims is of great interest to shipowners, op- “unseaworthiness” cause of action had its recent decision the Supreme Court in unseaworthiness cases, and their un- erators, insurers, seagoing personnel and long been utilized by the plaintiff’s per- stated multiple times that its prior de- availability in Jones Act cases, means their families, and others involved in the sonal injury bar as an additional cause of cision in Miles v. Apex Marine Corp. that seamen’s injury cases will now be

U.S. maritime industry. The decision action, for which punitive damages were remains good law. In Miles, the Court evaluated based on their true worth and is particularly important for those who sought (since they were not prohibited held that while a general maritime law the gravity of the injury suffered; claims employ personnel to work onboard ves- by any statute). The Supreme Court’s cause of action for the death of a sea- for punitive damages will not be a club sels and those who may become injured Batterton decision con? rmed that un- man exists, that claim does not include held over the head of shipowners and op- while working. However, the decision seaworthiness claims do not carry with a right of recovery by his or her family erators. may well have rami? cations for other them the right to punitive damages, since members for their loss of “society” due Punitive damages are not covered by maritime personal injury and wrongful providing punitive damages for unsea- to that death. Maritime law requires uni- most marine liability insurance policies, death claims, regardless of whether the worthiness claims would not conform formity between and among the Jones and in any case, by law, they cannot be claimant legally quali? es as a seaman. to Congress’ intention in passing the Act, the Death on the High Seas Act insured against in almost half the states

The Supreme Court’s decision in- Jones Act and other statutes, which limit (“DOHSA”) and the general maritime in the U.S. Therefore, before Batter- volved the question of whether punitive recovery to only “pecuniary” damages law, and since Congress limited dam- ton, plaintiffs’ lawyers used to threaten damages are available to a seaman who (economic losses, such as lost wages). ages under DOHSA to “pecuniary loss”, to bankrupt small companies and single suffered a personal injury as a result of Plaintiffs’ lawyers had for over a de- no claim for loss of society is allowed. shipowners via large uninsured (and of- the alleged “unseaworthiness” of the cade argued that the Supreme Court’s Common law (court-created) remedies ten bogus) claims for punitive damages, vessel on which the seaman was work- 2009 decision of Atlantic Sounding, for damages in maritime cases should be which had the effect of driving a wedge ing. Legal unseaworthiness has largely which permits punitive damages for a interpreted to achieve uniformity with between the shipowner and the under- been considered by courts of law as a shipowner’s willful failure to provide statutory remedies provided by Congress writer, often leading to the need to settle strict liability cause of action. Histori- maintenance and cure to an injured such as the Jones Act, the Longshore Act a case for more than it should have been cally, such claims were designed to en- crewmember, meant that punitive dam- and DOHSA. worth. sure that shipowners did not operate ves- ages were available in all maritime in- The Batterton Court discussed, and But injured seamen are not left ma- sels which posed a considerable risk to jury cases. rejected 6 to 3, the plaintiffs’ argument rooned by Batterton; they still have the those onboard, such as of a ? re on board In Batterton, the Court rejected that that courts are free to create new claims right to bring a claim for unseaworthi- or sinking a vessel. In practice, unsea- position. At the same time, the Court and remedies for seafarers, since much ness, for which, if proved, the shipowner worthiness claims were brought alleging also held that Atlantic Sounding remains of maritime law is judge-made. The is strictly liable. conditions such as a slippery deck, lack good law, because the basis for the main- Court noted that this may have been true That claim has a lower burden of of certain equipment, lack of adequate tenance and cure claim was historic, but decades ago, but now that Congress has proof than a claim for negligence under manpower or an untrained crewmember, different from the basis for the Congres- legislated, this opportunity no longer ex- the Jones Act, so it is easier to prove in which allegedly led to a crewmember sionally-enacted Jones Act. Therefore, ists. The Court likewise discussed, and court. Batterton restores the balance of getting hurt. allowing punitive damages for wrongful rejected, the plaintiffs’ assertion based remedies which Congress has mandated. 16 Maritime Reporter & Engineering News • JULY 2019