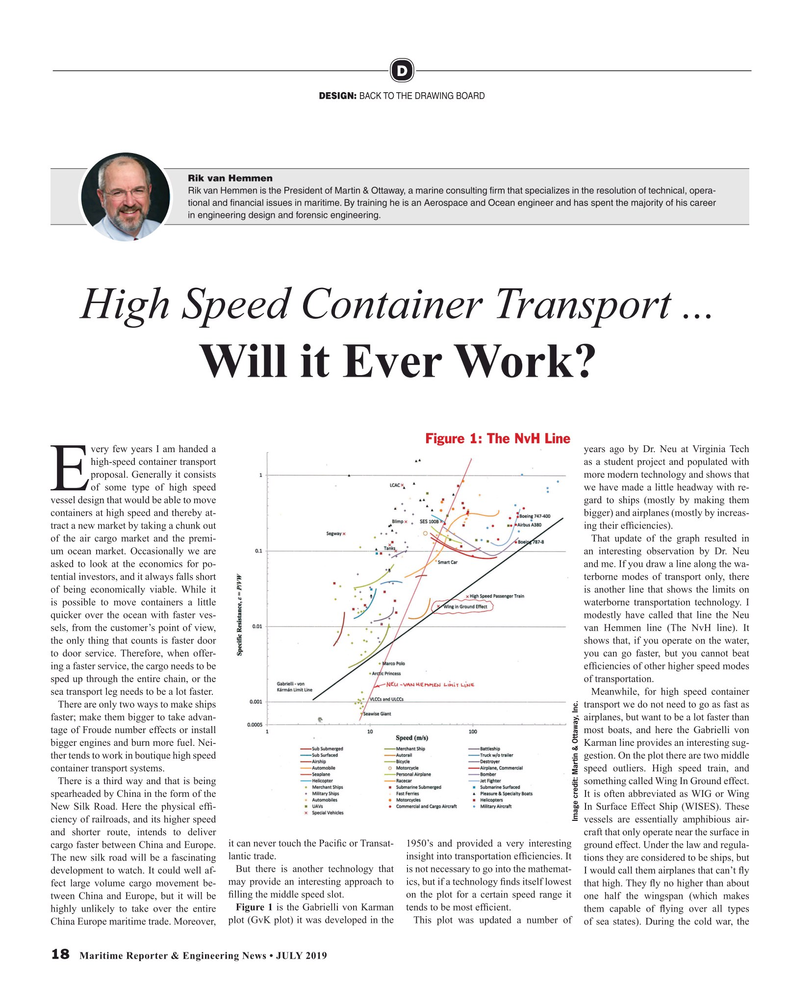 DESIGN: BACK TO THE DRAWING BOARD

Rik van Hemmen is the President of Martin & Ottaway, a marine consulting frm that specializes in the resolution of technical, opera- tional and fnancial issues in maritime. By training he is an Aerospace and Ocean engineer and has spent the majority of his career in engineering design and forensic engineering.

Will it Ever Work?

Figure 1: The NvH Line very few years I am handed a years ago by Dr. Neu at Virginia Tech high-speed container transport as a student project and populated with proposal. Generally it consists more modern technology and shows that

E of some type of high speed we have made a little headway with re- vessel design that would be able to move gard to ships (mostly by making them containers at high speed and thereby at- bigger) and airplanes (mostly by increas- tract a new market by taking a chunk out ing their effciencies).

of the air cargo market and the premi- That update of the graph resulted in um ocean market. Occasionally we are an interesting observation by Dr. Neu asked to look at the economics for po- and me. If you draw a line along the wa- tential investors, and it always falls short terborne modes of transport only, there of being economically viable. While it is another line that shows the limits on is possible to move containers a little waterborne transportation technology. I quicker over the ocean with faster ves- modestly have called that line the Neu sels, from the customer’s point of view, van Hemmen line (The NvH line). It the only thing that counts is faster door shows that, if you operate on the water, to door service. Therefore, when offer- you can go faster, but you cannot beat ing a faster service, the cargo needs to be effciencies of other higher speed modes sped up through the entire chain, or the of transportation.

There are only two ways to make ships transport we do not need to go as fast as faster; make them bigger to take advan- airplanes, but want to be a lot faster than tage of Froude number effects or install most boats, and here the Gabrielli von bigger engines and burn more fuel. Nei- Karman line provides an interesting sug- ther tends to work in boutique high speed gestion. On the plot there are two middle container transport systems. speed outliers. High speed train, and

There is a third way and that is being something called Wing In Ground effect. spearheaded by China in the form of the It is often abbreviated as WIG or Wing

ciency of railroads, and its higher speed vessels are essentially amphibious air- and shorter route, intends to deliver craft that only operate near the surface in 1950’s and provided a very interesting ground effect. Under the law and regula-cargo faster between China and Europe. it can never touch the Pacifc or Transat- insight into transportation effciencies. It tions they are considered to be ships, but The new silk road will be a fascinating lantic trade.

But there is another technology that is not necessary to go into the mathemat- development to watch. It could well af- I would call them airplanes that can’t fy fect large volume cargo movement be- may provide an interesting approach to ics, but if a technology fnds itself lowest that high. They fy no higher than about on the plot for a certain speed range it one half the wingspan (which makes tween China and Europe, but it will be flling the middle speed slot.

Figure 1 is the Gabrielli von Karman tends to be most effcient.

This plot was updated a number of of sea states). During the cold war, the China Europe maritime trade. Moreover, plot (GvK plot) it was developed in the 18 Maritime Reporter & Engineering News • JULY 2019