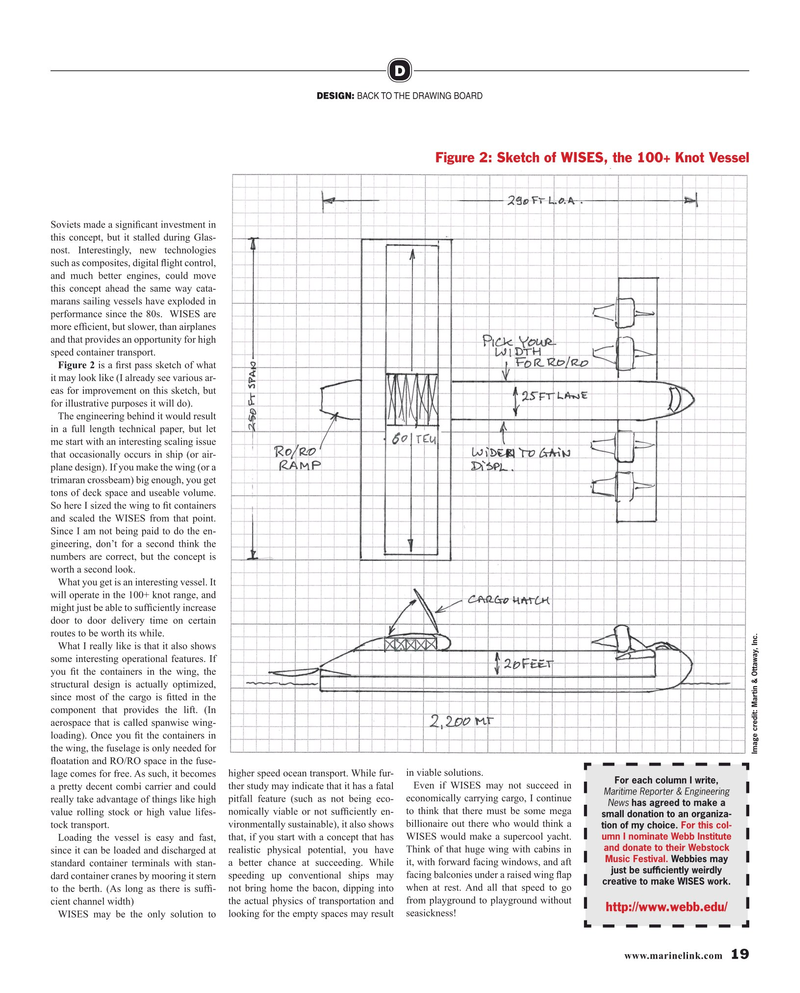 DESIGN: BACK TO THE DRAWING BOARD

Soviets made a signifcant investment in this concept, but it stalled during Glas- nost. Interestingly, new technologies such as composites, digital fight control, and much better engines, could move this concept ahead the same way cata- marans sailing vessels have exploded in performance since the 80s. WISES are more effcient, but slower, than airplanes and that provides an opportunity for high speed container transport.

Figure 2 is a frst pass sketch of what it may look like (I already see various ar- eas for improvement on this sketch, but for illustrative purposes it will do).

The engineering behind it would result in a full length technical paper, but let me start with an interesting scaling issue that occasionally occurs in ship (or air- plane design). If you make the wing (or a trimaran crossbeam) big enough, you get tons of deck space and useable volume.

So here I sized the wing to ft containers and scaled the WISES from that point.

Since I am not being paid to do the en- gineering, don’t for a second think the numbers are correct, but the concept is worth a second look.

What you get is an interesting vessel. It will operate in the 100+ knot range, and might just be able to suffciently increase door to door delivery time on certain routes to be worth its while.

foatation and RO/RO space in the fuse- lage comes for free. As such, it becomes higher speed ocean transport. While fur- in viable solutions.

For each column I write, a pretty decent combi carrier and could ther study may indicate that it has a fatal Even if WISES may not succeed in

Maritime Reporter & Engineering really take advantage of things like high pitfall feature (such as not being eco- economically carrying cargo, I continue

News has agreed to make a value rolling stock or high value lifes- nomically viable or not suffciently en- to think that there must be some mega small donation to an organiza- vironmentally sustainable), it also shows billionaire out there who would think a tock transport.

tion of my choice. For this col- umn I nominate Webb Institute

Loading the vessel is easy and fast, that, if you start with a concept that has WISES would make a supercool yacht. and donate to their Webstock since it can be loaded and discharged at realistic physical potential, you have Think of that huge wing with cabins in

Music Festival. Webbies may a better chance at succeeding. While it, with forward facing windows, and aft standard container terminals with stan- just be suffciently weirdly dard container cranes by mooring it stern speeding up conventional ships may facing balconies under a raised wing fap creative to make WISES work. not bring home the bacon, dipping into when at rest. And all that speed to go to the berth. (As long as there is suff- the actual physics of transportation and from playground to playground without cient channel width) http://www.webb.edu/

WISES may be the only solution to looking for the empty spaces may result seasickness! www.marinelink.com 19