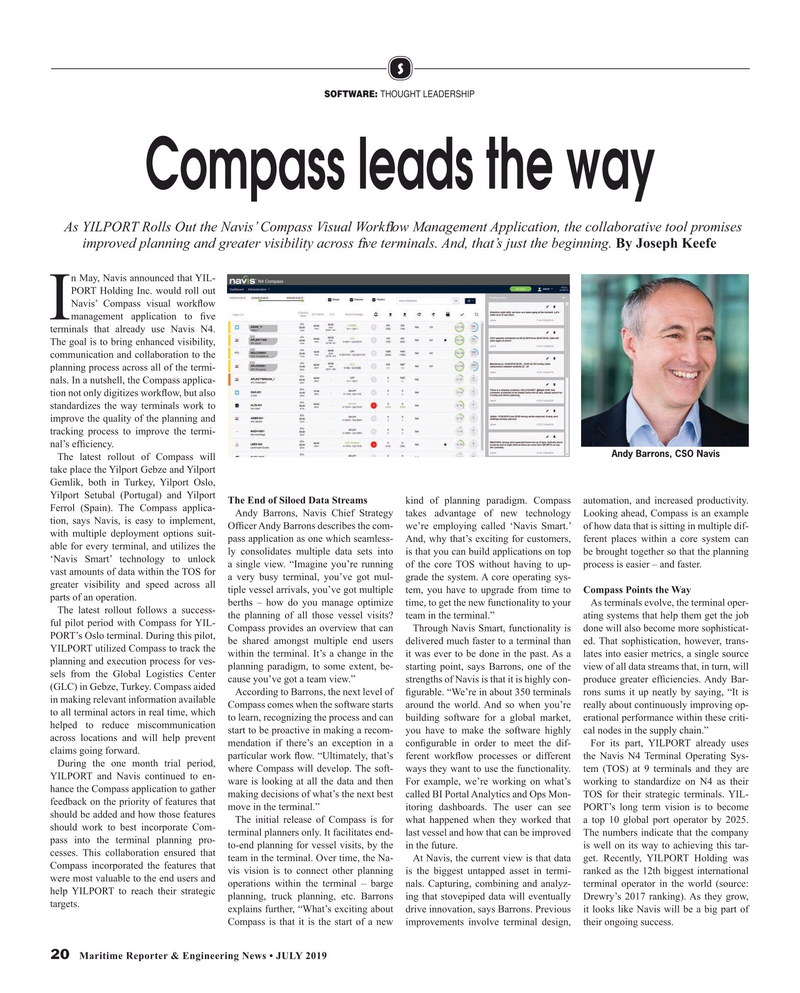 PORT Holding Inc. would roll out

Imanagement application to ? ve terminals that already use Navis N4.

Gemlik, both in Turkey, Yilport Oslo,

Andy Barrons, Navis Chief Strategy takes advantage of new technology Looking ahead, Compass is an example tion, says Navis, is easy to implement, Of? cer Andy Barrons describes the com- we’re employing called ‘Navis Smart.’ of how data that is sitting in multiple dif- with multiple deployment options suit- pass application as one which seamless- And, why that’s exciting for customers, ferent places within a core system can able for every terminal, and utilizes the ly consolidates multiple data sets into is that you can build applications on top be brought together so that the planning ‘Navis Smart’ technology to unlock a single view. “Imagine you’re running of the core TOS without having to up- process is easier – and faster.

vast amounts of data within the TOS for a very busy terminal, you’ve got mul- grade the system. A core operating sys- greater visibility and speed across all tiple vessel arrivals, you’ve got multiple tem, you have to upgrade from time to Compass Points the Way parts of an operation.

berths – how do you manage optimize time, to get the new functionality to your As terminals evolve, the terminal oper-

The latest rollout follows a success- the planning of all those vessel visits? team in the terminal.” ating systems that help them get the job ful pilot period with Compass for YIL-

Compass provides an overview that can Through Navis Smart, functionality is done will also become more sophisticat-

PORT’s Oslo terminal. During this pilot, be shared amongst multiple end users delivered much faster to a terminal than ed. That sophistication, however, trans-

YILPORT utilized Compass to track the within the terminal. It’s a change in the it was ever to be done in the past. As a lates into easier metrics, a single source planning and execution process for ves- planning paradigm, to some extent, be- starting point, says Barrons, one of the view of all data streams that, in turn, will sels from the Global Logistics Center cause you’ve got a team view.” strengths of Navis is that it is highly con- produce greater ef? ciencies. Andy Bar- (GLC) in Gebze, Turkey. Compass aided

According to Barrons, the next level of ? gurable. “We’re in about 350 terminals rons sums it up neatly by saying, “It is in making relevant information available

Compass comes when the software starts around the world. And so when you’re really about continuously improving op- to all terminal actors in real time, which helped to reduce miscommunication to learn, recognizing the process and can building software for a global market, erational performance within these criti- start to be proactive in making a recom- you have to make the software highly cal nodes in the supply chain.” across locations and will help prevent mendation if there’s an exception in a con? gurable in order to meet the dif- For its part, YILPORT already uses claims going forward.

During the one month trial period, particular work ? ow. “Ultimately, that’s ferent work? ow processes or different the Navis N4 Terminal Operating Sys- where Compass will develop. The soft- ways they want to use the functionality. tem (TOS) at 9 terminals and they are

YILPORT and Navis continued to en- ware is looking at all the data and then For example, we’re working on what’s working to standardize on N4 as their hance the Compass application to gather making decisions of what’s the next best called BI Portal Analytics and Ops Mon- TOS for their strategic terminals. YIL- feedback on the priority of features that move in the terminal.” itoring dashboards. The user can see PORT’s long term vision is to become should be added and how those features

The initial release of Compass is for what happened when they worked that a top 10 global port operator by 2025. should work to best incorporate Com- terminal planners only. It facilitates end- last vessel and how that can be improved The numbers indicate that the company pass into the terminal planning pro- to-end planning for vessel visits, by the in the future. is well on its way to achieving this tar- cesses. This collaboration ensured that team in the terminal. Over time, the Na- At Navis, the current view is that data get. Recently, YILPORT Holding was

Compass incorporated the features that vis vision is to connect other planning is the biggest untapped asset in termi- ranked as the 12th biggest international were most valuable to the end users and operations within the terminal – barge nals. Capturing, combining and analyz- terminal operator in the world (source: help YILPORT to reach their strategic planning, truck planning, etc. Barrons ing that stovepiped data will eventually Drewry’s 2017 ranking). As they grow, targets.

explains further, “What’s exciting about drive innovation, says Barrons. Previous it looks like Navis will be a big part of

Compass is that it is the start of a new improvements involve terminal design, their ongoing success.