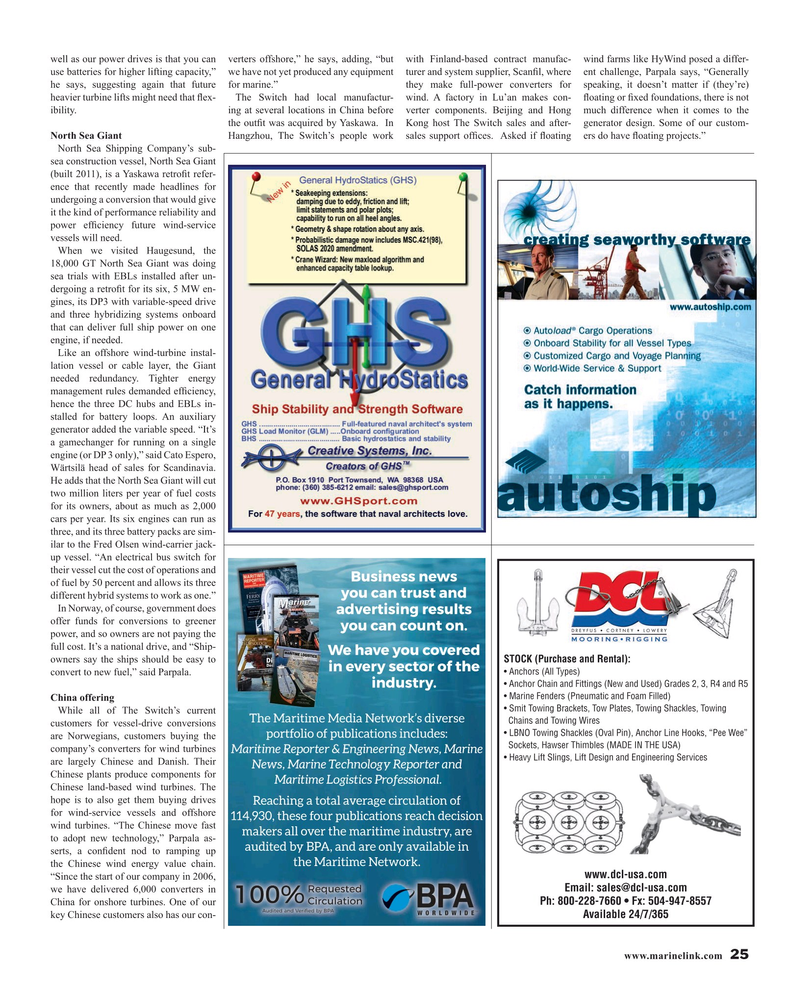 well as our power drives is that you can verters offshore,” he says, adding, “but with Finland-based contract manufac- wind farms like HyWind posed a differ- use batteries for higher lifting capacity,” we have not yet produced any equipment turer and system supplier, Scan? l, where ent challenge, Parpala says, “Generally he says, suggesting again that future for marine.” they make full-power converters for speaking, it doesn’t matter if (they’re) heavier turbine lifts might need that ? ex- The Switch had local manufactur- wind. A factory in Lu’an makes con- ? oating or ? xed foundations, there is not ibility. ing at several locations in China before verter components. Beijing and Hong much difference when it comes to the the out? t was acquired by Yaskawa. In Kong host The Switch sales and after- generator design. Some of our custom-

North Sea Shipping Company’s sub- sea construction vessel, North Sea Giant (built 2011), is a Yaskawa retro? t refer- ence that recently made headlines for undergoing a conversion that would give it the kind of performance reliability and power ef? ciency future wind-service vessels will need.

When we visited Haugesund, the 18,000 GT North Sea Giant was doing sea trials with EBLs installed after un- dergoing a retro? t for its six, 5 MW en- gines, its DP3 with variable-speed drive and three hybridizing systems onboard that can deliver full ship power on one engine, if needed.

Wärtsilä head of sales for Scandinavia.

He adds that the North Sea Giant will cut two million liters per year of fuel costs for its owners, about as much as 2,000 cars per year. Its six engines can run as three, and its three battery packs are sim- ilar to the Fred Olsen wind-carrier jack- up vessel. “An electrical bus switch for their vessel cut the cost of operations and

Business news of fuel by 50 percent and allows its three you can trust and different hybrid systems to work as one.”

In Norway, of course, government does advertising results offer funds for conversions to greener you can count on.

power, and so owners are not paying the full cost. It’s a national drive, and “Ship-

We have you covered owners say the ships should be easy to STOCK (Purchase and Rental): in every sector of the s