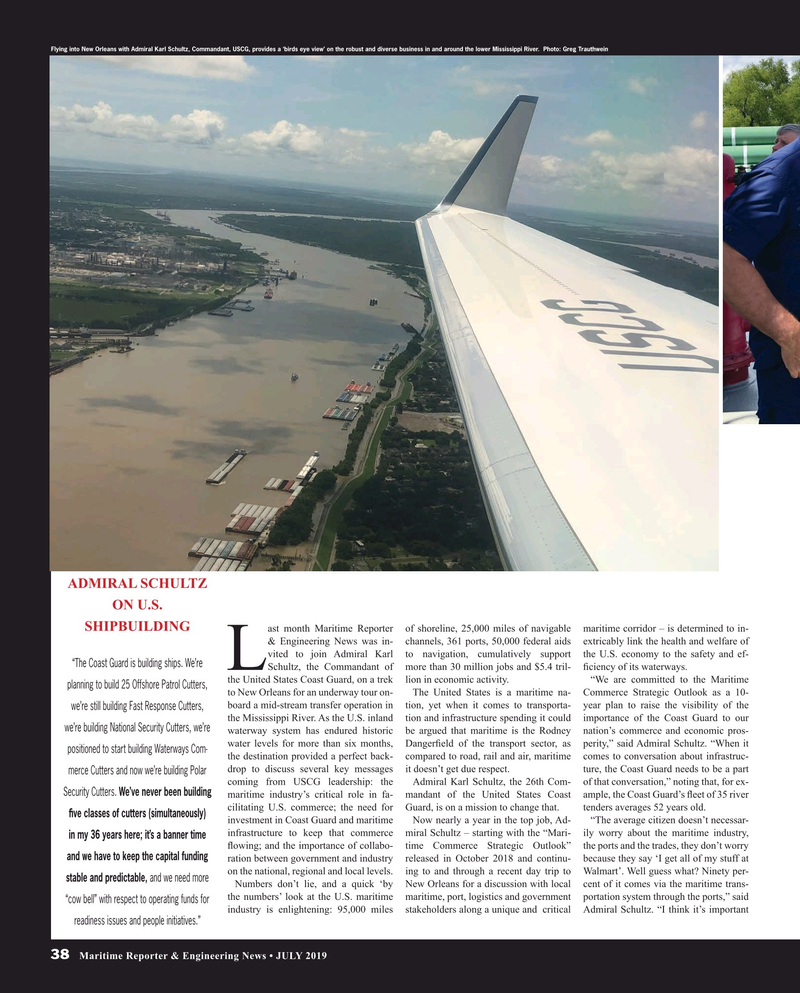 Flying into New Orleans with Admiral Karl Schultz, Commandant, USCG, provides a ‘birds eye view’ on the robust and diverse business in and around the lower Mississippi River. Photo: Greg Trauthwein

SHIPBUILDING ast month Maritime Reporter of shoreline, 25,000 miles of navigable maritime corridor – is determined to in- & Engineering News was in- channels, 361 ports, 50,000 federal aids extricably link the health and welfare of vited to join Admiral Karl to navigation, cumulatively support the U.S. economy to the safety and ef- “The Coast Guard is building ships. We’re

LSchultz, the Commandant of more than 30 million jobs and $5.4 tril- ? ciency of its waterways.

the United States Coast Guard, on a trek lion in economic activity. “We are committed to the Maritime planning to build 25 Offshore Patrol Cutters, to New Orleans for an underway tour on- The United States is a maritime na- Commerce Strategic Outlook as a 10- board a mid-stream transfer operation in tion, yet when it comes to transporta- year plan to raise the visibility of the we’re still building Fast Response Cutters, the Mississippi River. As the U.S. inland tion and infrastructure spending it could importance of the Coast Guard to our we’re building National Security Cutters, we’re waterway system has endured historic be argued that maritime is the Rodney nation’s commerce and economic pros- water levels for more than six months, Danger? eld of the transport sector, as perity,” said Admiral Schultz. “When it positioned to start building Waterways Com- the destination provided a perfect back- compared to road, rail and air, maritime comes to conversation about infrastruc- drop to discuss several key messages it doesn’t get due respect. ture, the Coast Guard needs to be a part merce Cutters and now we’re building Polar coming from USCG leadership: the Admiral Karl Schultz, the 26th Com- of that conversation,” noting that, for ex-

Security Cutters. We’ve never been building maritime industry’s critical role in fa- mandant of the United States Coast ample, the Coast Guard’s ? eet of 35 river cilitating U.S. commerce; the need for Guard, is on a mission to change that. tenders averages 52 years old. ? ve classes of cutters (simultaneously) investment in Coast Guard and maritime Now nearly a year in the top job, Ad- “The average citizen doesn’t necessar- infrastructure to keep that commerce miral Schultz – starting with the “Mari- ily worry about the maritime industry, in my 36 years here; it’s a banner time ? owing; and the importance of collabo- time Commerce Strategic Outlook” the ports and the trades, they don’t worry and we have to keep the capital funding ration between government and industry released in October 2018 and continu- because they say ‘I get all of my stuff at on the national, regional and local levels. ing to and through a recent day trip to Walmart’. Well guess what? Ninety per- stable and predictable, and we need more

Numbers don’t lie, and a quick ‘by New Orleans for a discussion with local cent of it comes via the maritime trans- the numbers’ look at the U.S. maritime maritime, port, logistics and government portation system through the ports,” said “cow bell” with respect to operating funds for industry is enlightening: 95,000 miles stakeholders along a unique and critical Admiral Schultz. “I think it’s important readiness issues and people initiatives.” 38 Maritime Reporter & Engineering News • JULY 2019