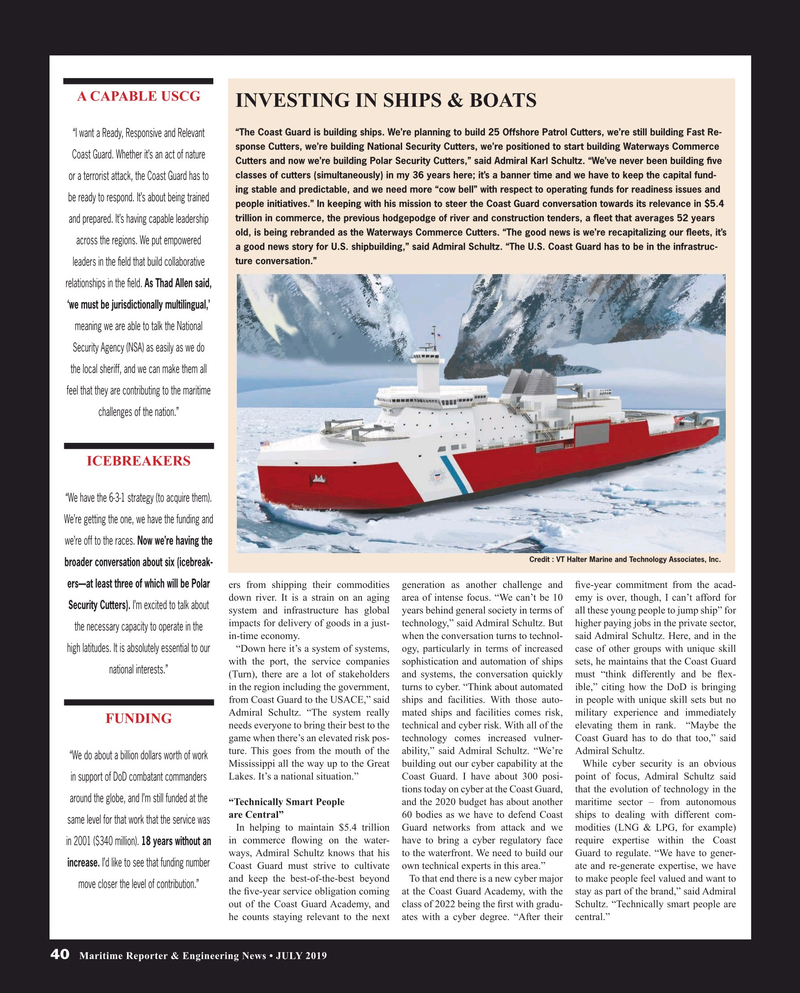 Coast Guard. Whether it’s an act of nature

Cutters and now we’re building Polar Security Cutters,” said Admiral Karl Schultz. “We’ve never been building ? ve classes of cutters (simultaneously) in my 36 years here; it’s a banner time and we have to keep the capital fund- or a terrorist attack, the Coast Guard has to ing stable and predictable, and we need more “cow bell” with respect to operating funds for readiness issues and be ready to respond. It’s about being trained people initiatives.” In keeping with his mission to steer the Coast Guard conversation towards its relevance in $5.4 trillion in commerce, the previous hodgepodge of river and construction tenders, a ? eet that averages 52 years and prepared. It’s having capable leadership old, is being rebranded as the Waterways Commerce Cutters. “The good news is we’re recapitalizing our ? eets, it’s across the regions. We put empowered a good news story for U.S. shipbuilding,” said Admiral Schultz. “The U.S. Coast Guard has to be in the infrastruc- ture conversation.” leaders in the ? eld that build collaborative relationships in the ? eld. As Thad Allen said, ‘we must be jurisdictionally multilingual,’ meaning we are able to talk the National

Security Agency (NSA) as easily as we do the local sheriff, and we can make them all feel that they are contributing to the maritime challenges of the nation.”

ICEBREAKERS “We have the 6-3-1 strategy (to acquire them).

We’re getting the one, we have the funding and we’re off to the races. Now we’re having the

broader conversation about six (icebreak- ers—at least three of which will be Polar ers from shipping their commodities generation as another challenge and ? ve-year commitment from the acad- down river. It is a strain on an aging area of intense focus. “We can’t be 10 emy is over, though, I can’t afford for

Security Cutters). I’m excited to talk about system and infrastructure has global years behind general society in terms of all these young people to jump ship” for impacts for delivery of goods in a just- technology,” said Admiral Schultz. But higher paying jobs in the private sector, the necessary capacity to operate in the in-time economy. when the conversation turns to technol- said Admiral Schultz. Here, and in the “Down here it’s a system of systems, ogy, particularly in terms of increased case of other groups with unique skill high latitudes. It is absolutely essential to our with the port, the service companies sophistication and automation of ships sets, he maintains that the Coast Guard national interests.” (Turn), there are a lot of stakeholders and systems, the conversation quickly must “think differently and be ? ex- in the region including the government, turns to cyber. “Think about automated ible,” citing how the DoD is bringing from Coast Guard to the USACE,” said ships and facilities. With those auto- in people with unique skill sets but no

FUNDING needs everyone to bring their best to the technical and cyber risk. With all of the elevating them in rank. “Maybe the game when there’s an elevated risk pos- technology comes increased vulner- Coast Guard has to do that too,” said ture. This goes from the mouth of the ability,” said Admiral Schultz. “We’re Admiral Schultz.

“We do about a billion dollars worth of work

Lakes. It’s a national situation.” Coast Guard. I have about 300 posi- point of focus, Admiral Schultz said in support of DoD combatant commanders tions today on cyber at the Coast Guard, that the evolution of technology in the around the globe, and I’m still funded at the “Technically Smart People and the 2020 budget has about another maritime sector – from autonomous are Central” 60 bodies as we have to defend Coast ships to dealing with different com- same level for that work that the service was

In helping to maintain $5.4 trillion Guard networks from attack and we modities (LNG & LPG, for example) in commerce ? owing on the water- have to bring a cyber regulatory face require expertise within the Coast in 2001 ($340 million). 18 years without an ways, Admiral Schultz knows that his to the waterfront. We need to build our Guard to regulate. “We have to gener- increase. I’d like to see that funding number

Coast Guard must strive to cultivate own technical experts in this area.” ate and re-generate expertise, we have and keep the best-of-the-best beyond To that end there is a new cyber major to make people feel valued and want to move closer the level of contribution.” the ? ve-year service obligation coming at the Coast Guard Academy, with the stay as part of the brand,” said Admiral out of the Coast Guard Academy, and class of 2022 being the ? rst with gradu- Schultz. “Technically smart people are he counts staying relevant to the next ates with a cyber degree. “After their central.” 40 Maritime Reporter & Engineering News • JULY 2019