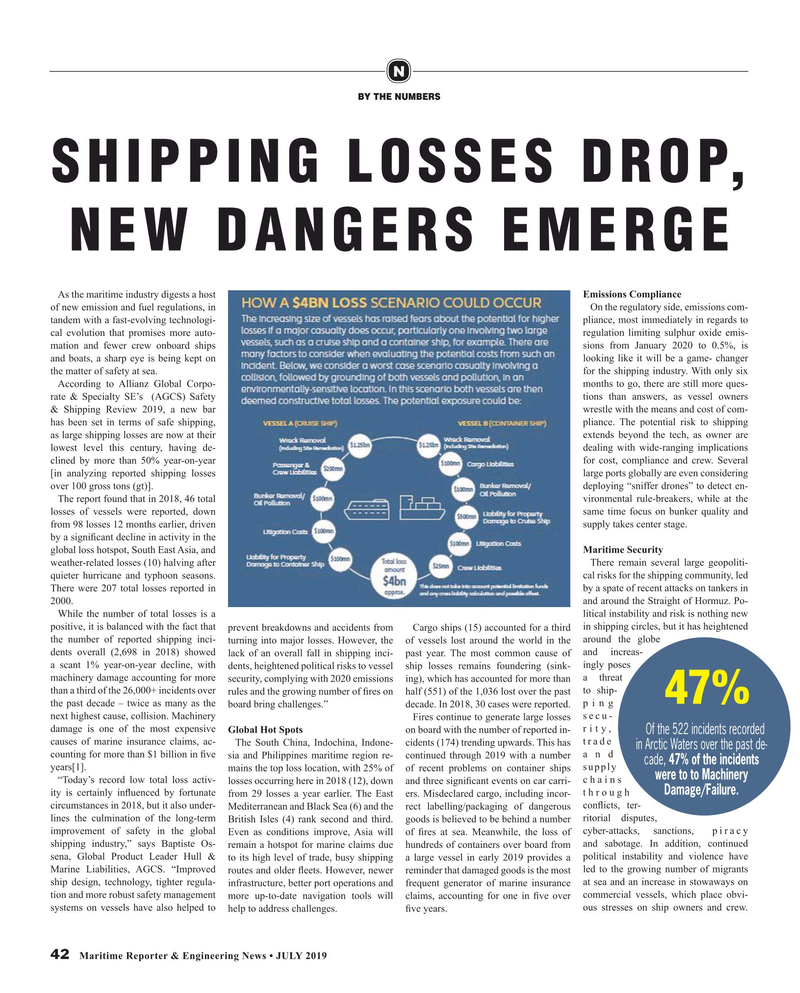 As the maritime industry digests a host Emissions Compliance of new emission and fuel regulations, in On the regulatory side, emissions com- tandem with a fast-evolving technologi- pliance, most immediately in regards to cal evolution that promises more auto- regulation limiting sulphur oxide emis- mation and fewer crew onboard ships sions from January 2020 to 0.5%, is and boats, a sharp eye is being kept on looking like it will be a game- changer the matter of safety at sea. for the shipping industry. With only six

According to Allianz Global Corpo- months to go, there are still more ques- rate & Specialty SE’s (AGCS) Safety tions than answers, as vessel owners & Shipping Review 2019, a new bar wrestle with the means and cost of com- has been set in terms of safe shipping, pliance. The potential risk to shipping as large shipping losses are now at their extends beyond the tech, as owner are lowest level this century, having de- dealing with wide-ranging implications clined by more than 50% year-on-year for cost, compliance and crew. Several [in analyzing reported shipping losses large ports globally are even considering over 100 gross tons (gt)]. deploying “sniffer drones” to detect en-

The report found that in 2018, 46 total vironmental rule-breakers, while at the losses of vessels were reported, down same time focus on bunker quality and from 98 losses 12 months earlier, driven supply takes center stage.

There were 207 total losses reported in by a spate of recent attacks on tankers in 2000. and around the Straight of Hormuz. Po-

While the number of total losses is a litical instability and risk is nothing new positive, it is balanced with the fact that prevent breakdowns and accidents from Cargo ships (15) accounted for a third in shipping circles, but it has heightened the number of reported shipping inci- turning into major losses. However, the of vessels lost around the world in the around the globe dents overall (2,698 in 2018) showed lack of an overall fall in shipping inci- past year. The most common cause of and increas- ingly poses a scant 1% year-on-year decline, with dents, heightened political risks to vessel ship losses remains foundering (sink- machinery damage accounting for more security, complying with 2020 emissions ing), which has accounted for more than a threat than a third of the 26,000+ incidents over rules and the growing number of ? res on half (551) of the 1,036 lost over the past to ship- 47% the past decade – twice as many as the board bring challenges.” decade. In 2018, 30 cases were reported. ping next highest cause, collision. Machinery Fires continue to generate large losses secu- rity, damage is one of the most expensive Global Hot Spots on board with the number of reported in-

Of the 522 incidents recorded causes of marine insurance claims, ac- The South China, Indochina, Indone- cidents (174) trending upwards. This has trade in Arctic Waters over the past de- counting for more than $1 billion in ? ve sia and Philippines maritime region re- continued through 2019 with a number and cade, 47% of the incidents years[1]. mains the top loss location, with 25% of of recent problems on container ships supply were to to Machinery chains “Today’s record low total loss activ- losses occurring here in 2018 (12), down and three signi? cant events on car carri-

through ity is certainly in? uenced by fortunate from 29 losses a year earlier. The East ers. Misdeclared cargo, including incor- circumstances in 2018, but it also under- Mediterranean and Black Sea (6) and the rect labelling/packaging of dangerous con? icts, ter- lines the culmination of the long-term British Isles (4) rank second and third. goods is believed to be behind a number ritorial disputes, improvement of safety in the global Even as conditions improve, Asia will of ? res at sea. Meanwhile, the loss of cyber-attacks, sanctions, piracy shipping industry,” says Baptiste Os- remain a hotspot for marine claims due hundreds of containers over board from and sabotage. In addition, continued sena, Global Product Leader Hull & to its high level of trade, busy shipping a large vessel in early 2019 provides a political instability and violence have

Marine Liabilities, AGCS. “Improved routes and older ? eets. However, newer reminder that damaged goods is the most led to the growing number of migrants ship design, technology, tighter regula- infrastructure, better port operations and frequent generator of marine insurance at sea and an increase in stowaways on tion and more robust safety management more up-to-date navigation tools will claims, accounting for one in ? ve over commercial vessels, which place obvi- ous stresses on ship owners and crew. systems on vessels have also helped to help to address challenges. ? ve years.