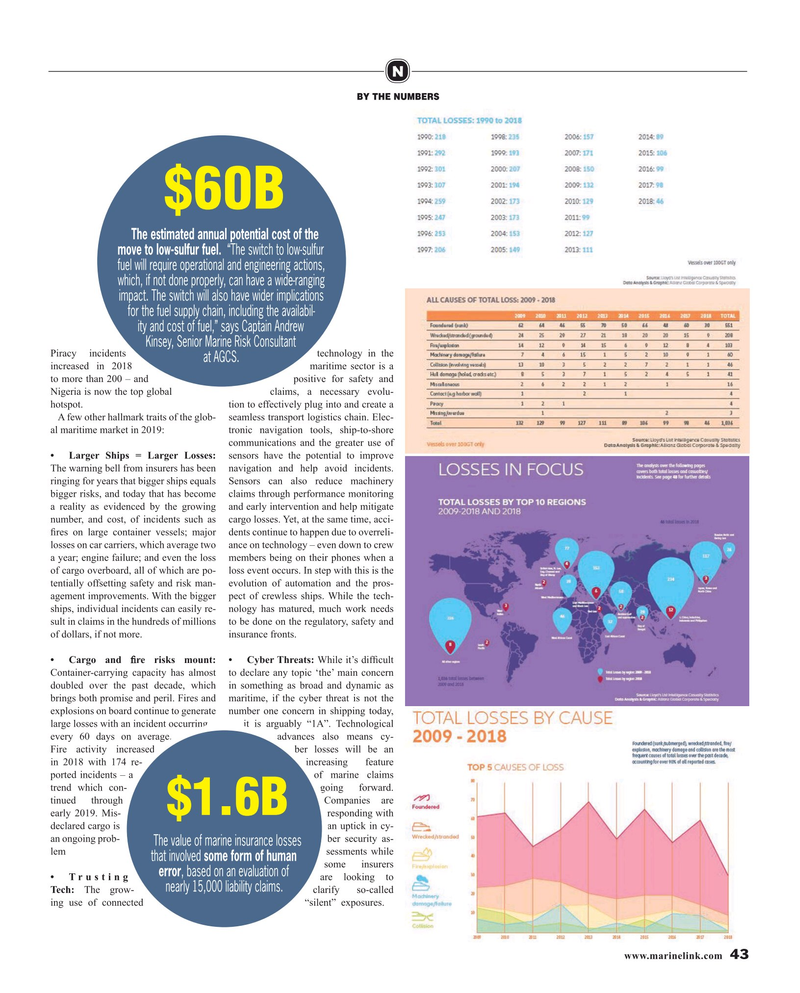 The estimated annual potential cost of the move to low-sulfur fuel. “The switch to low-sulfur fuel will require operational and engineering actions, which, if not done properly, can have a wide-ranging impact. The switch will also have wider implications for the fuel supply chain, including the availabil- ity and cost of fuel,” says Captain Andrew

Piracy incidents technology in the at AGCS. increased in 2018 maritime sector is a to more than 200 – and positive for safety and

Nigeria is now the top global claims, a necessary evolu- hotspot. tion to effectively plug into and create a

A few other hallmark traits of the glob- seamless transport logistics chain. Elec- al maritime market in 2019: tronic navigation tools, ship-to-shore communications and the greater use of • Larger Ships = Larger Losses: sensors have the potential to improve

The warning bell from insurers has been navigation and help avoid incidents. ringing for years that bigger ships equals Sensors can also reduce machinery bigger risks, and today that has become claims through performance monitoring a reality as evidenced by the growing and early intervention and help mitigate number, and cost, of incidents such as cargo losses. Yet, at the same time, acci- ? res on large container vessels; major dents continue to happen due to overreli- losses on car carriers, which average two ance on technology – even down to crew a year; engine failure; and even the loss members being on their phones when a of cargo overboard, all of which are po- loss event occurs. In step with this is the tentially offsetting safety and risk man- evolution of automation and the pros- agement improvements. With the bigger pect of crewless ships. While the tech- ships, individual incidents can easily re- nology has matured, much work needs sult in claims in the hundreds of millions to be done on the regulatory, safety and of dollars, if not more. insurance fronts.

Container-carrying capacity has almost to declare any topic ‘the’ main concern doubled over the past decade, which in something as broad and dynamic as brings both promise and peril. Fires and maritime, if the cyber threat is not the explosions on board continue to generate number one concern in shipping today, large losses with an incident occurring it is arguably “1A”. Technological every 60 days on average. advances also means cy-

Fire activity increased ber losses will be an in 2018 with 174 re- increasing feature ported incidents – a of marine claims trend which con- going forward. tinued through Companies are $1.6B early 2019. Mis- responding with declared cargo is an uptick in cy- an ongoing prob- ber security as-

The value of marine insurance losses lem sessments while that involved some form of human some insurers error, based on an evaluation of • Trusting are looking to nearly 15,000 liability claims.