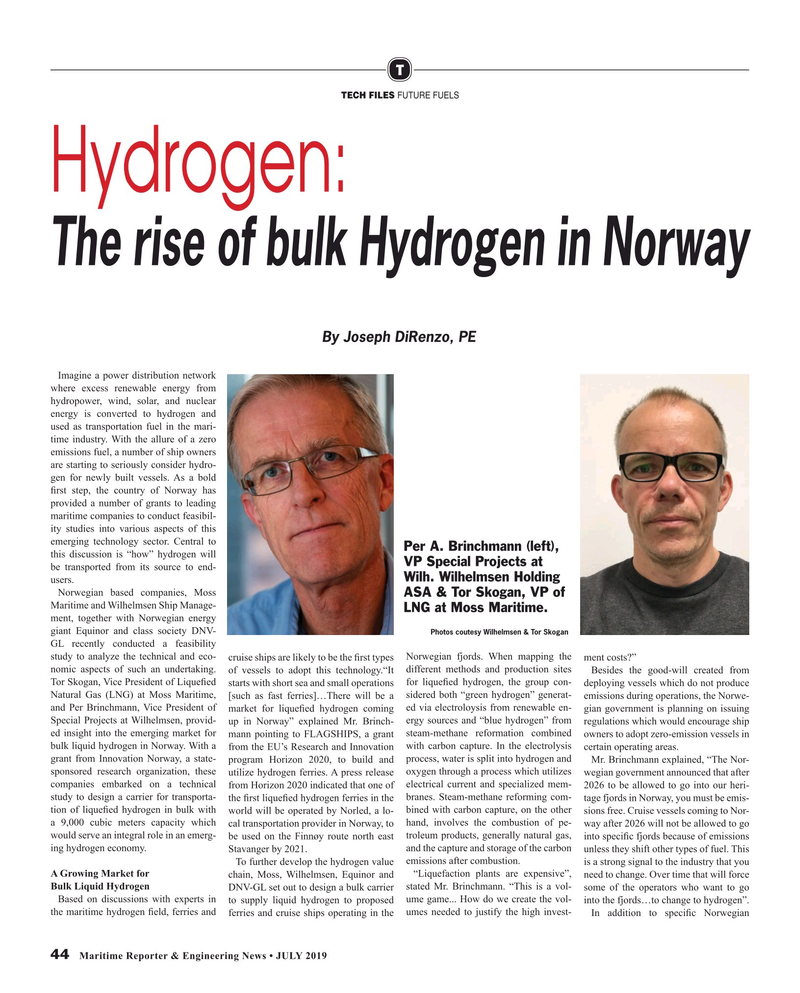 The rise of bulk Hydrogen in Norway

Imagine a power distribution network where excess renewable energy from hydropower, wind, solar, and nuclear energy is converted to hydrogen and used as transportation fuel in the mari- time industry. With the allure of a zero emissions fuel, a number of ship owners are starting to seriously consider hydro- gen for newly built vessels. As a bold ? rst step, the country of Norway has provided a number of grants to leading maritime companies to conduct feasibil- ity studies into various aspects of this emerging technology sector. Central to

Per A. Brinchmann (left), this discussion is “how” hydrogen will

VP Special Projects at be transported from its source to end-

GL recently conducted a feasibility study to analyze the technical and eco- cruise ships are likely to be the ? rst types Norwegian fjords. When mapping the ment costs?” nomic aspects of such an undertaking. of vessels to adopt this technology.“It different methods and production sites Besides the good-will created from

Natural Gas (LNG) at Moss Maritime, [such as fast ferries]…There will be a sidered both “green hydrogen” generat- emissions during operations, the Norwe- and Per Brinchmann, Vice President of market for lique? ed hydrogen coming ed via electroloysis from renewable en- gian government is planning on issuing

Special Projects at Wilhelmsen, provid- up in Norway” explained Mr. Brinch- ergy sources and “blue hydrogen” from regulations which would encourage ship ed insight into the emerging market for mann pointing to FLAGSHIPS, a grant steam-methane reformation combined owners to adopt zero-emission vessels in bulk liquid hydrogen in Norway. With a from the EU’s Research and Innovation with carbon capture. In the electrolysis certain operating areas. grant from Innovation Norway, a state- program Horizon 2020, to build and process, water is split into hydrogen and Mr. Brinchmann explained, “The Nor- sponsored research organization, these utilize hydrogen ferries. A press release oxygen through a process which utilizes wegian government announced that after companies embarked on a technical from Horizon 2020 indicated that one of electrical current and specialized mem- 2026 to be allowed to go into our heri- study to design a carrier for transporta- the ? rst lique? ed hydrogen ferries in the branes. Steam-methane reforming com- tage fjords in Norway, you must be emis- tion of lique? ed hydrogen in bulk with world will be operated by Norled, a lo- bined with carbon capture, on the other sions free. Cruise vessels coming to Nor- a 9,000 cubic meters capacity which cal transportation provider in Norway, to hand, involves the combustion of pe- way after 2026 will not be allowed to go would serve an integral role in an emerg- be used on the Finnøy route north east troleum products, generally natural gas, into speci? c fjords because of emissions ing hydrogen economy. Stavanger by 2021. and the capture and storage of the carbon unless they shift other types of fuel. This

To further develop the hydrogen value emissions after combustion. is a strong signal to the industry that you

A Growing Market for chain, Moss, Wilhelmsen, Equinor and “Liquefaction plants are expensive”, need to change. Over time that will force

Bulk Liquid Hydrogen DNV-GL set out to design a bulk carrier stated Mr. Brinchmann. “This is a vol- some of the operators who want to go

Based on discussions with experts in to supply liquid hydrogen to proposed ume game... How do we create the vol- into the fjords…to change to hydrogen”.