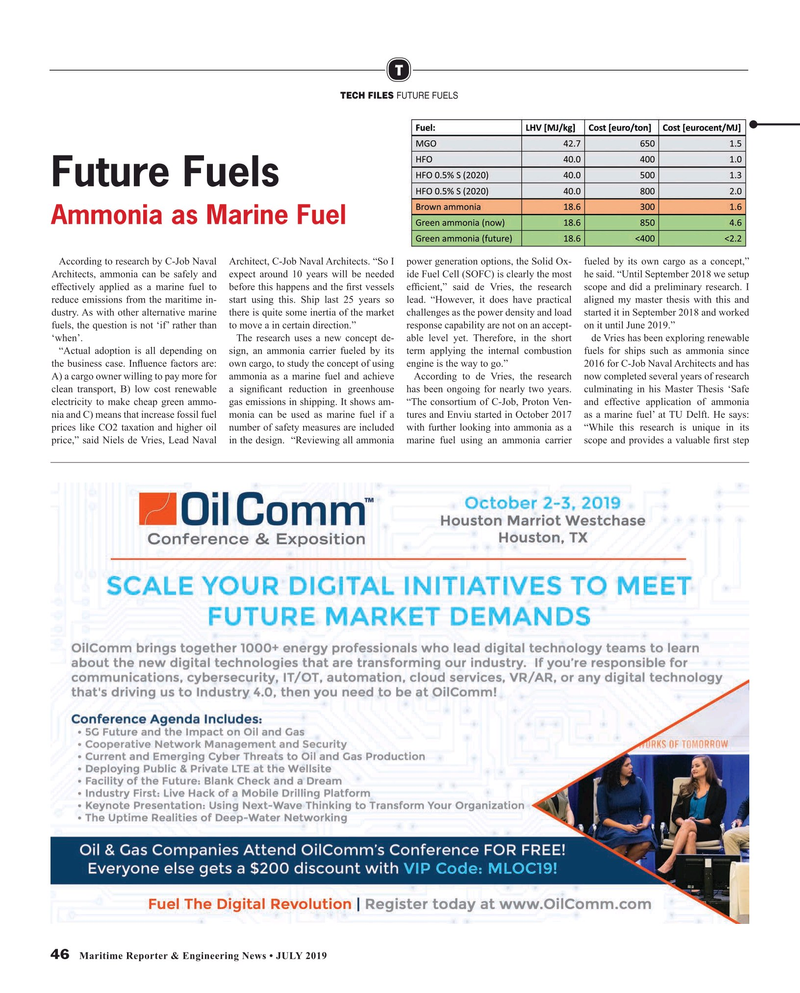 Architects, ammonia can be safely and expect around 10 years will be needed ide Fuel Cell (SOFC) is clearly the most he said. “Until September 2018 we setup effectively applied as a marine fuel to before this happens and the ? rst vessels ef? cient,” said de Vries, the research scope and did a preliminary research. I reduce emissions from the maritime in- start using this. Ship last 25 years so lead. “However, it does have practical aligned my master thesis with this and dustry. As with other alternative marine there is quite some inertia of the market challenges as the power density and load started it in September 2018 and worked fuels, the question is not ‘if’ rather than to move a in certain direction.” response capability are not on an accept- on it until June 2019.” ‘when’. The research uses a new concept de- able level yet. Therefore, in the short de Vries has been exploring renewable “Actual adoption is all depending on sign, an ammonia carrier fueled by its term applying the internal combustion fuels for ships such as ammonia since the business case. In? uence factors are: own cargo, to study the concept of using engine is the way to go.” 2016 for C-Job Naval Architects and has

A) a cargo owner willing to pay more for ammonia as a marine fuel and achieve According to de Vries, the research now completed several years of research clean transport, B) low cost renewable a signi? cant reduction in greenhouse has been ongoing for nearly two years. culminating in his Master Thesis ‘Safe electricity to make cheap green ammo- gas emissions in shipping. It shows am- “The consortium of C-Job, Proton Ven- and effective application of ammonia nia and C) means that increase fossil fuel monia can be used as marine fuel if a tures and Enviu started in October 2017 as a marine fuel’ at TU Delft. He says: prices like CO2 taxation and higher oil number of safety measures are included with further looking into ammonia as a “While this research is unique in its price,” said Niels de Vries, Lead Naval in the design. “Reviewing all ammonia marine fuel using an ammonia carrier scope and provides a valuable ? rst step 46 Maritime Reporter & Engineering News • JULY 2019