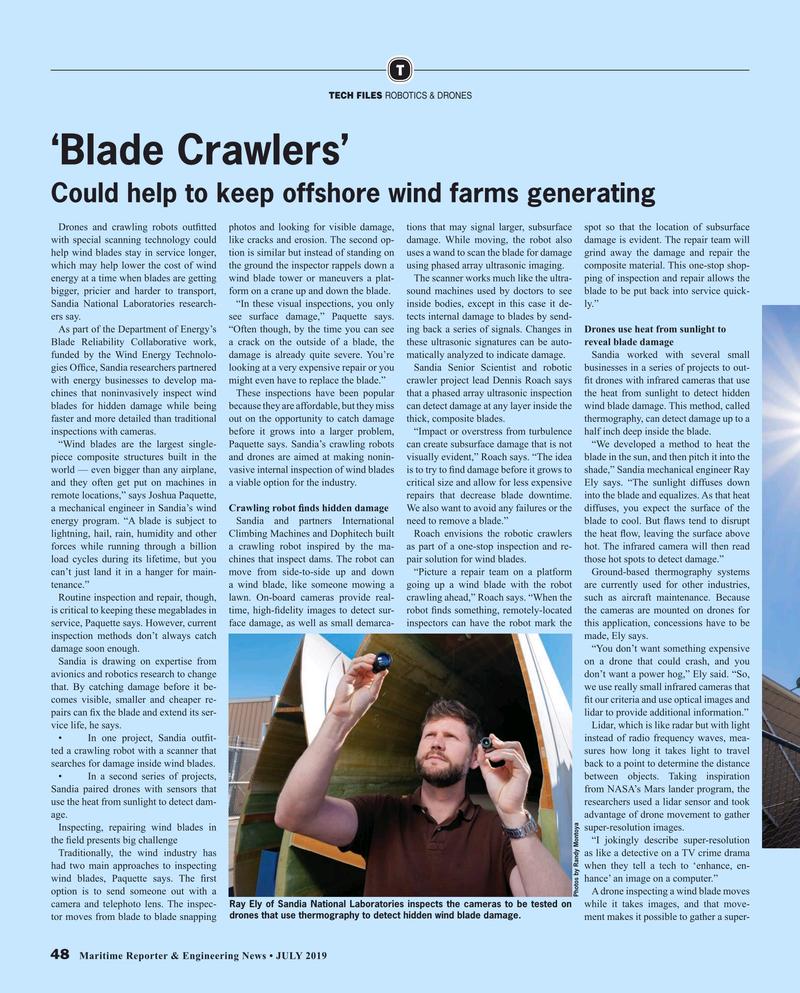 Drones and crawling robots out? tted photos and looking for visible damage, tions that may signal larger, subsurface spot so that the location of subsurface with special scanning technology could like cracks and erosion. The second op- damage. While moving, the robot also damage is evident. The repair team will help wind blades stay in service longer, tion is similar but instead of standing on uses a wand to scan the blade for damage grind away the damage and repair the which may help lower the cost of wind the ground the inspector rappels down a using phased array ultrasonic imaging. composite material. This one-stop shop- energy at a time when blades are getting wind blade tower or maneuvers a plat- The scanner works much like the ultra- ping of inspection and repair allows the bigger, pricier and harder to transport, form on a crane up and down the blade. sound machines used by doctors to see blade to be put back into service quick-

Sandia National Laboratories research- “In these visual inspections, you only inside bodies, except in this case it de- ly.” ers say. see surface damage,” Paquette says. tects internal damage to blades by send-

As part of the Department of Energy’s “Often though, by the time you can see ing back a series of signals. Changes in Drones use heat from sunlight to

Blade Reliability Collaborative work, a crack on the outside of a blade, the these ultrasonic signatures can be auto- reveal blade damage funded by the Wind Energy Technolo- damage is already quite severe. You’re matically analyzed to indicate damage. Sandia worked with several small gies Of? ce, Sandia researchers partnered looking at a very expensive repair or you Sandia Senior Scientist and robotic businesses in a series of projects to out- with energy businesses to develop ma- might even have to replace the blade.” crawler project lead Dennis Roach says ? t drones with infrared cameras that use chines that noninvasively inspect wind These inspections have been popular that a phased array ultrasonic inspection the heat from sunlight to detect hidden blades for hidden damage while being because they are affordable, but they miss can detect damage at any layer inside the wind blade damage. This method, called faster and more detailed than traditional out on the opportunity to catch damage thick, composite blades. thermography, can detect damage up to a inspections with cameras. before it grows into a larger problem, “Impact or overstress from turbulence half inch deep inside the blade.

“Wind blades are the largest single- Paquette says. Sandia’s crawling robots can create subsurface damage that is not “We developed a method to heat the piece composite structures built in the and drones are aimed at making nonin- visually evident,” Roach says. “The idea blade in the sun, and then pitch it into the world — even bigger than any airplane, vasive internal inspection of wind blades is to try to ? nd damage before it grows to shade,” Sandia mechanical engineer Ray and they often get put on machines in a viable option for the industry. critical size and allow for less expensive Ely says. “The sunlight diffuses down remote locations,” says Joshua Paquette, repairs that decrease blade downtime. into the blade and equalizes. As that heat a mechanical engineer in Sandia’s wind Crawling robot ? nds hidden damage We also want to avoid any failures or the diffuses, you expect the surface of the energy program. “A blade is subject to Sandia and partners International need to remove a blade.” blade to cool. But ? aws tend to disrupt lightning, hail, rain, humidity and other Climbing Machines and Dophitech built Roach envisions the robotic crawlers the heat ? ow, leaving the surface above forces while running through a billion a crawling robot inspired by the ma- as part of a one-stop inspection and re- hot. The infrared camera will then read load cycles during its lifetime, but you chines that inspect dams. The robot can pair solution for wind blades. those hot spots to detect damage.” can’t just land it in a hanger for main- move from side-to-side up and down “Picture a repair team on a platform Ground-based thermography systems tenance.” a wind blade, like someone mowing a going up a wind blade with the robot are currently used for other industries,

Routine inspection and repair, though, lawn. On-board cameras provide real- crawling ahead,” Roach says. “When the such as aircraft maintenance. Because is critical to keeping these megablades in time, high-? delity images to detect sur- robot ? nds something, remotely-located the cameras are mounted on drones for service, Paquette says. However, current face damage, as well as small demarca- inspectors can have the robot mark the this application, concessions have to be inspection methods don’t always catch made, Ely says.

Sandia is drawing on expertise from on a drone that could crash, and you avionics and robotics research to change don’t want a power hog,” Ely said. “So, that. By catching damage before it be- we use really small infrared cameras that comes visible, smaller and cheaper re- ? t our criteria and use optical images and pairs can ? x the blade and extend its ser- lidar to provide additional information.” vice life, he says. Lidar, which is like radar but with light • In one project, Sandia out? t- instead of radio frequency waves, mea- ted a crawling robot with a scanner that sures how long it takes light to travel searches for damage inside wind blades. back to a point to determine the distance • In a second series of projects, between objects. Taking inspiration

Sandia paired drones with sensors that from NASA’s Mars lander program, the use the heat from sunlight to detect dam- researchers used a lidar sensor and took age. advantage of drone movement to gather

Traditionally, the wind industry has as like a detective on a TV crime drama had two main approaches to inspecting when they tell a tech to ‘enhance, en- wind blades, Paquette says. The ? rst hance’ an image on a computer.” option is to send someone out with a A drone inspecting a wind blade moves

Photos by Randy Montoya camera and telephoto lens. The inspec- while it takes images, and that move-

Ray Ely of Sandia National Laboratories inspects the cameras to be tested on drones that use thermography to detect hidden wind blade damage.