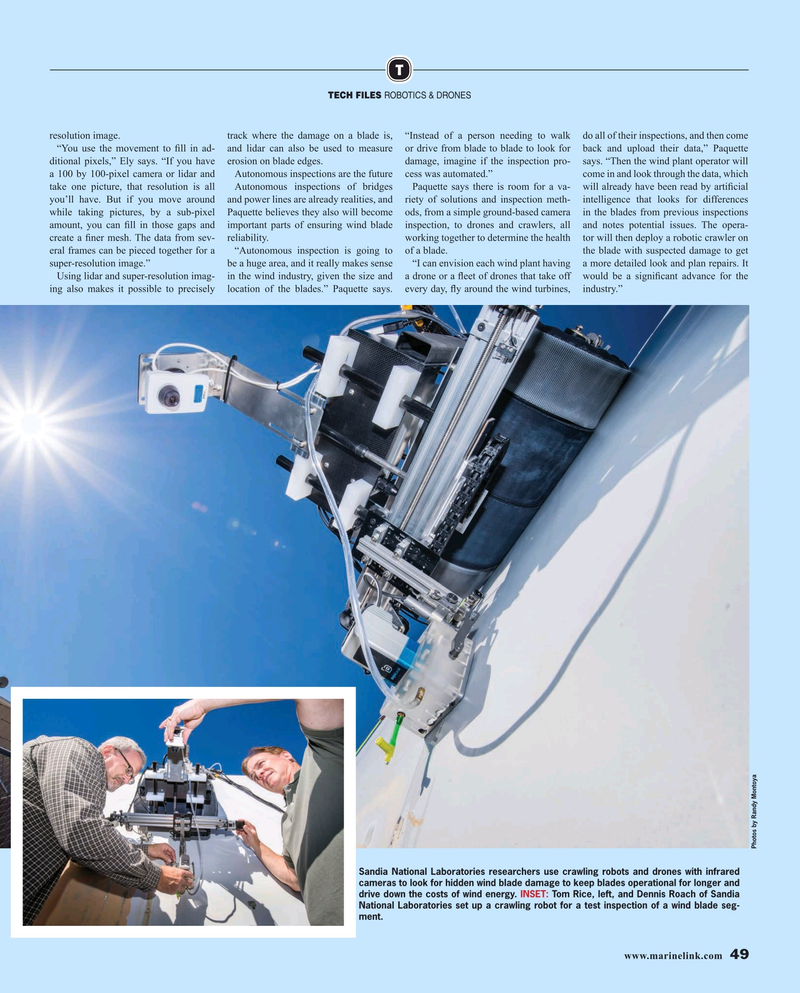 TECH FILES ROBOTICS & DRONES resolution image. track where the damage on a blade is, “Instead of a person needing to walk do all of their inspections, and then come “You use the movement to ? ll in ad- and lidar can also be used to measure or drive from blade to blade to look for back and upload their data,” Paquette ditional pixels,” Ely says. “If you have erosion on blade edges. damage, imagine if the inspection pro- says. “Then the wind plant operator will a 100 by 100-pixel camera or lidar and Autonomous inspections are the future cess was automated.” come in and look through the data, which take one picture, that resolution is all Autonomous inspections of bridges Paquette says there is room for a va- will already have been read by arti? cial you’ll have. But if you move around and power lines are already realities, and riety of solutions and inspection meth- intelligence that looks for differences while taking pictures, by a sub-pixel Paquette believes they also will become ods, from a simple ground-based camera in the blades from previous inspections amount, you can ? ll in those gaps and important parts of ensuring wind blade inspection, to drones and crawlers, all and notes potential issues. The opera- create a ? ner mesh. The data from sev- reliability. working together to determine the health tor will then deploy a robotic crawler on eral frames can be pieced together for a “Autonomous inspection is going to of a blade. the blade with suspected damage to get super-resolution image.” be a huge area, and it really makes sense “I can envision each wind plant having a more detailed look and plan repairs. It

Using lidar and super-resolution imag- in the wind industry, given the size and a drone or a ? eet of drones that take off would be a signi? cant advance for the ing also makes it possible to precisely location of the blades.” Paquette says. every day, ? y around the wind turbines, industry.”

Sandia National Laboratories researchers use crawling robots and drones with infrared cameras to look for hidden wind blade damage to keep blades operational for longer and drive down the costs of wind energy. INSET: Tom Rice, left, and Dennis Roach of Sandia

National Laboratories set up a crawling robot for a test inspection of a wind blade seg- ment. www.marinelink.com 49