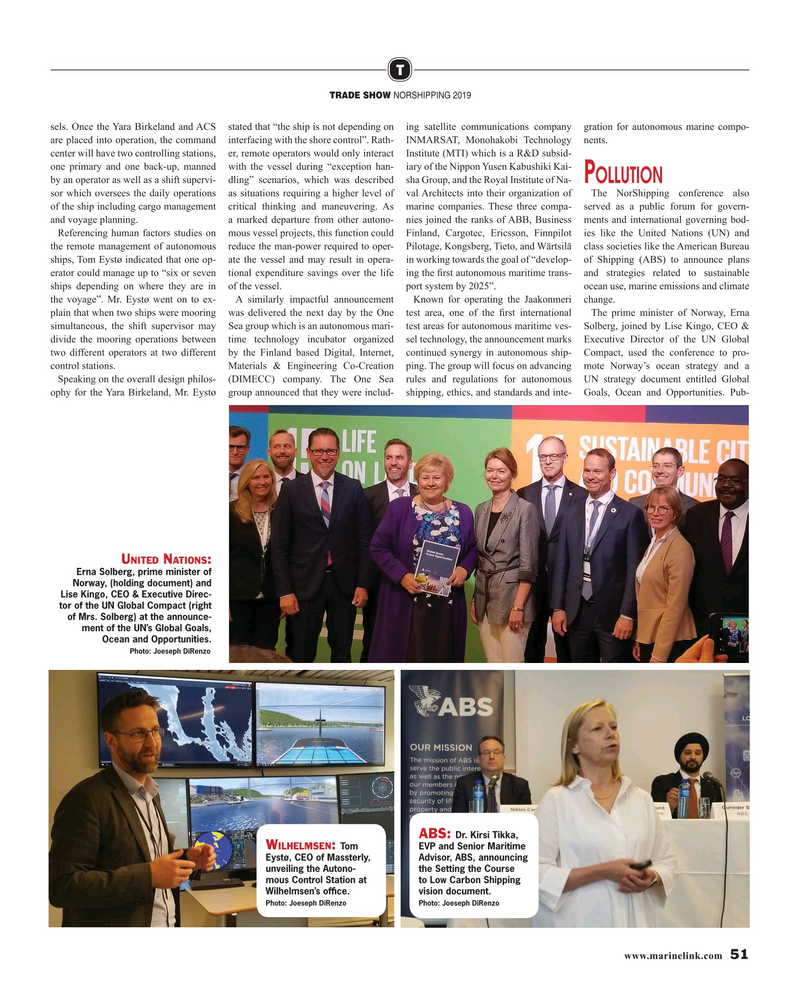 TRADE SHOW NORSHIPPING 2019 sels. Once the Yara Birkeland and ACS stated that “the ship is not depending on ing satellite communications company gration for autonomous marine compo- are placed into operation, the command interfacing with the shore control”. Rath- INMARSAT, Monohakobi Technology nents. center will have two controlling stations, er, remote operators would only interact Institute (MTI) which is a R&D subsid- one primary and one back-up, manned with the vessel during “exception han- iary of the Nippon Yusen Kabushiki Kai- by an operator as well as a shift supervi- dling” scenarios, which was described sha Group, and the Royal Institute of Na- POLLUTION sor which oversees the daily operations as situations requiring a higher level of val Architects into their organization of The NorShipping conference also of the ship including cargo management critical thinking and maneuvering. As marine companies. These three compa- served as a public forum for govern- and voyage planning. a marked departure from other autono- nies joined the ranks of ABB, Business ments and international governing bod-

Referencing human factors studies on mous vessel projects, this function could Finland, Cargotec, Ericsson, Finnpilot ies like the United Nations (UN) and the remote management of autonomous reduce the man-power required to oper- Pilotage, Kongsberg, Tieto, and Wärtsilä class societies like the American Bureau ships, Tom Eystø indicated that one op- ate the vessel and may result in opera- in working towards the goal of “develop- of Shipping (ABS) to announce plans erator could manage up to “six or seven tional expenditure savings over the life ing the ? rst autonomous maritime trans- and strategies related to sustainable ships depending on where they are in of the vessel. port system by 2025”. ocean use, marine emissions and climate the voyage”. Mr. Eystø went on to ex- A similarly impactful announcement Known for operating the Jaakonmeri change. plain that when two ships were mooring was delivered the next day by the One test area, one of the ? rst international The prime minister of Norway, Erna simultaneous, the shift supervisor may Sea group which is an autonomous mari- test areas for autonomous maritime ves- Solberg, joined by Lise Kingo, CEO & divide the mooring operations between time technology incubator organized sel technology, the announcement marks Executive Director of the UN Global two different operators at two different by the Finland based Digital, Internet, continued synergy in autonomous ship- Compact, used the conference to pro- control stations. Materials & Engineering Co-Creation ping. The group will focus on advancing mote Norway’s ocean strategy and a

Speaking on the overall design philos- (DIMECC) company. The One Sea rules and regulations for autonomous UN strategy document entitled Global ophy for the Yara Birkeland, Mr. Eystø group announced that they were includ- shipping, ethics, and standards and inte- Goals, Ocean and Opportunities. Pub-