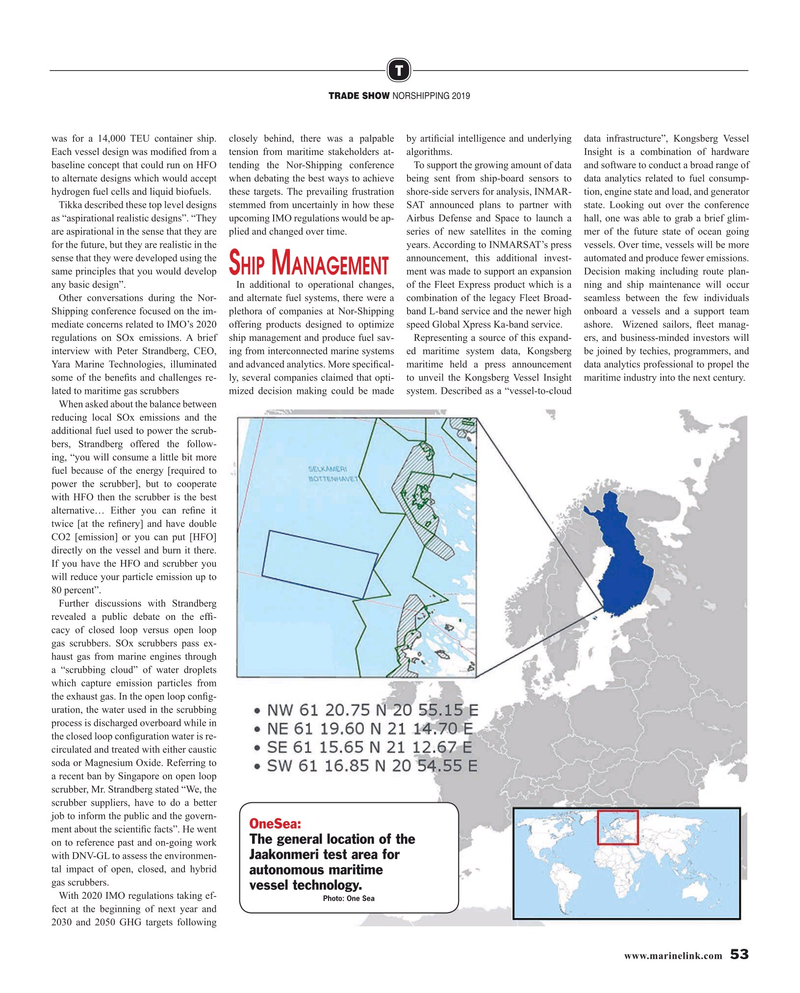 TRADE SHOW NORSHIPPING 2019 was for a 14,000 TEU container ship. closely behind, there was a palpable by arti? cial intelligence and underlying data infrastructure”, Kongsberg Vessel

Each vessel design was modi? ed from a tension from maritime stakeholders at- algorithms. Insight is a combination of hardware baseline concept that could run on HFO tending the Nor-Shipping conference To support the growing amount of data and software to conduct a broad range of to alternate designs which would accept when debating the best ways to achieve being sent from ship-board sensors to data analytics related to fuel consump- hydrogen fuel cells and liquid biofuels. these targets. The prevailing frustration shore-side servers for analysis, INMAR- tion, engine state and load, and generator

Tikka described these top level designs stemmed from uncertainly in how these SAT announced plans to partner with state. Looking out over the conference as “aspirational realistic designs”. “They upcoming IMO regulations would be ap- Airbus Defense and Space to launch a hall, one was able to grab a brief glim- are aspirational in the sense that they are plied and changed over time. series of new satellites in the coming mer of the future state of ocean going for the future, but they are realistic in the years. According to INMARSAT’s press vessels. Over time, vessels will be more sense that they were developed using the announcement, this additional invest- automated and produce fewer emissions. same principles that you would develop ment was made to support an expansion Decision making including route plan-S MHIP ANAGEMENT any basic design”. In additional to operational changes, of the Fleet Express product which is a ning and ship maintenance will occur

Other conversations during the Nor- and alternate fuel systems, there were a combination of the legacy Fleet Broad- seamless between the few individuals

Yara Marine Technologies, illuminated and advanced analytics. More speci? cal- maritime held a press announcement data analytics professional to propel the some of the bene? ts and challenges re- ly, several companies claimed that opti- to unveil the Kongsberg Vessel Insight maritime industry into the next century. lated to maritime gas scrubbers mized decision making could be made system. Described as a “vessel-to-cloud

When asked about the balance between reducing local SOx emissions and the additional fuel used to power the scrub- bers, Strandberg offered the follow- ing, “you will consume a little bit more fuel because of the energy [required to power the scrubber], but to cooperate with HFO then the scrubber is the best alternative… Either you can re? ne it twice [at the re? nery] and have double

CO2 [emission] or you can put [HFO] directly on the vessel and burn it there.

If you have the HFO and scrubber you will reduce your particle emission up to 80 percent”.

Further discussions with Strandberg revealed a public debate on the ef? - cacy of closed loop versus open loop gas scrubbers. SOx scrubbers pass ex- haust gas from marine engines through a “scrubbing cloud” of water droplets which capture emission particles from the exhaust gas. In the open loop con? g- uration, the water used in the scrubbing process is discharged overboard while in the closed loop con? guration water is re- circulated and treated with either caustic soda or Magnesium Oxide. Referring to a recent ban by Singapore on open loop scrubber, Mr. Strandberg stated “We, the scrubber suppliers, have to do a better job to inform the public and the govern-

OneSea: ment about the scienti? c facts”. He went

Photo: One Sea fect at the beginning of next year and 2030 and 2050 GHG targets following www.marinelink.com 53