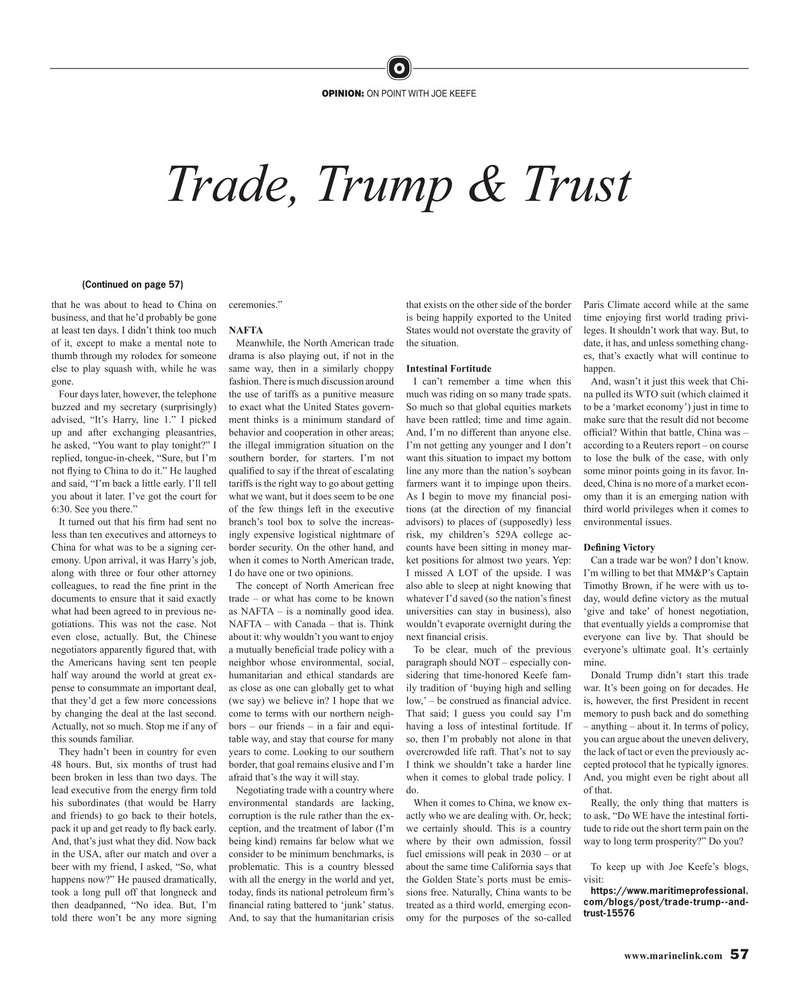 OPINION: ON POINT WITH JOE KEEFE

Trade, Trump & Trust (Continued on page 57) that he was about to head to China on ceremonies.” that exists on the other side of the border Paris Climate accord while at the same business, and that he’d probably be gone is being happily exported to the United time enjoying ? rst world trading privi- at least ten days. I didn’t think too much NAFTA States would not overstate the gravity of leges. It shouldn’t work that way. But, to of it, except to make a mental note to Meanwhile, the North American trade the situation. date, it has, and unless something chang- thumb through my rolodex for someone drama is also playing out, if not in the es, that’s exactly what will continue to else to play squash with, while he was same way, then in a similarly choppy Intestinal Fortitude happen.

gone. fashion. There is much discussion around I can’t remember a time when this And, wasn’t it just this week that Chi-

Four days later, however, the telephone the use of tariffs as a punitive measure much was riding on so many trade spats. na pulled its WTO suit (which claimed it buzzed and my secretary (surprisingly) to exact what the United States govern- So much so that global equities markets to be a ‘market economy’) just in time to advised, “It’s Harry, line 1.” I picked ment thinks is a minimum standard of have been rattled; time and time again. make sure that the result did not become up and after exchanging pleasantries, behavior and cooperation in other areas; And, I’m no different than anyone else. of? cial? Within that battle, China was – he asked, “You want to play tonight?” I the illegal immigration situation on the I’m not getting any younger and I don’t according to a Reuters report – on course replied, tongue-in-cheek, “Sure, but I’m southern border, for starters. I’m not want this situation to impact my bottom to lose the bulk of the case, with only not ? ying to China to do it.” He laughed quali? ed to say if the threat of escalating line any more than the nation’s soybean some minor points going in its favor. In- and said, “I’m back a little early. I’ll tell tariffs is the right way to go about getting farmers want it to impinge upon theirs. deed, China is no more of a market econ- you about it later. I’ve got the court for what we want, but it does seem to be one As I begin to move my ? nancial posi- omy than it is an emerging nation with 6:30. See you there.” of the few things left in the executive tions (at the direction of my ? nancial third world privileges when it comes to

It turned out that his ? rm had sent no branch’s tool box to solve the increas- advisors) to places of (supposedly) less environmental issues.

less than ten executives and attorneys to ingly expensive logistical nightmare of risk, my children’s 529A college ac-

China for what was to be a signing cer- border security. On the other hand, and counts have been sitting in money mar- De? ning Victory emony. Upon arrival, it was Harry’s job, when it comes to North American trade, ket positions for almost two years. Yep: Can a trade war be won? I don’t know. along with three or four other attorney I do have one or two opinions. I missed A LOT of the upside. I was I’m willing to bet that MM&P’s Captain colleagues, to read the ? ne print in the The concept of North American free also able to sleep at night knowing that Timothy Brown, if he were with us to- documents to ensure that it said exactly trade – or what has come to be known whatever I’d saved (so the nation’s ? nest day, would de? ne victory as the mutual what had been agreed to in previous ne- as NAFTA – is a nominally good idea. universities can stay in business), also ‘give and take’ of honest negotiation, gotiations. This was not the case. Not NAFTA – with Canada – that is. Think wouldn’t evaporate overnight during the that eventually yields a compromise that even close, actually. But, the Chinese about it: why wouldn’t you want to enjoy next ? nancial crisis. everyone can live by. That should be negotiators apparently ? gured that, with a mutually bene? cial trade policy with a To be clear, much of the previous everyone’s ultimate goal. It’s certainly the Americans having sent ten people neighbor whose environmental, social, paragraph should NOT – especially con- mine.

half way around the world at great ex- humanitarian and ethical standards are sidering that time-honored Keefe fam- Donald Trump didn’t start this trade pense to consummate an important deal, as close as one can globally get to what ily tradition of ‘buying high and selling war. It’s been going on for decades. He that they’d get a few more concessions (we say) we believe in? I hope that we low,’ – be construed as ? nancial advice. is, however, the ? rst President in recent by changing the deal at the last second. come to terms with our northern neigh- That said; I guess you could say I’m memory to push back and do something

Actually, not so much. Stop me if any of bors – our friends – in a fair and equi- having a loss of intestinal fortitude. If – anything – about it. In terms of policy, this sounds familiar. table way, and stay that course for many so, then I’m probably not alone in that you can argue about the uneven delivery,

They hadn’t been in country for even years to come. Looking to our southern overcrowded life raft. That’s not to say the lack of tact or even the previously ac- 48 hours. But, six months of trust had border, that goal remains elusive and I’m I think we shouldn’t take a harder line cepted protocol that he typically ignores. been broken in less than two days. The afraid that’s the way it will stay. when it comes to global trade policy. I And, you might even be right about all lead executive from the energy ? rm told Negotiating trade with a country where do. of that.

his subordinates (that would be Harry environmental standards are lacking, When it comes to China, we know ex- Really, the only thing that matters is and friends) to go back to their hotels, corruption is the rule rather than the ex- actly who we are dealing with. Or, heck; to ask, “Do WE have the intestinal forti- pack it up and get ready to ? y back early. ception, and the treatment of labor (I’m we certainly should. This is a country tude to ride out the short term pain on the

And, that’s just what they did. Now back being kind) remains far below what we where by their own admission, fossil way to long term prosperity?” Do you? in the USA, after our match and over a consider to be minimum benchmarks, is fuel emissions will peak in 2030 – or at beer with my friend, I asked, “So, what problematic. This is a country blessed about the same time California says that To keep up with Joe Keefe’s blogs, happens now?” He paused dramatically, with all the energy in the world and yet, the Golden State’s ports must be emis- visit: https://www.maritimeprofessional.

took a long pull off that longneck and today, ? nds its national petroleum ? rm’s sions free. Naturally, China wants to be com/blogs/post/trade-trump--and- then deadpanned, “No idea. But, I’m ? nancial rating battered to ‘junk’ status. treated as a third world, emerging econ- trust-15576 told there won’t be any more signing And, to say that the humanitarian crisis omy for the purposes of the so-called www.marinelink.com 57