Want to Cut Emissions? SLOW DOWN

Merchant ships traditionally operate in the open sea at or near full speed.  This is hard on the engine, hard on the ship and hard on the crew.

Slowing down reduces wear on the engine, improves fuel efficiency, reduces harmful air emissions and improves safety by providing the bridge personnel additional time to evaluate developing situations.  Some marine engines, though, are designed to operate at near full load.  Thus, for these engines, slow steaming creates its own set of problems – not insurmountable, but problems nonetheless.

It is posited, though, that each ship has its own sweet spot – the speed that is most efficient for the engine, the ship, the crew and the environment.  Finding that sweet spot and utilizing it for open ocean voyages will save money for the owner and operator, reduce stress on the crew, improve safety, and minimize impacts on the environment.

Recent studies have examined the benefits of a 10-20% reduction in vessel speed.  Benefits have been identified across the board, including greenhouse gas (GHG) emissions; emission of air pollutants such as Sox and NOx; black carbon emissions; generation of underwater noise; collisions with whales and other marine animals; and navigation safety.

There has been vocal disagreement regarding how such benefits should be obtained.  Some groups urge the International Maritime Organization (IMO) to adopt mandatory standards that could be enforced by flag administrations, port states and coastal states.  These groups note that modern technology, including satellite-based surveillance systems, can identify most vessels and monitor their speeds.
Groups at the other end of the spectrum argue that the maritime industry has made great strides toward minimizing its environmental footprint and that the last thing it needs now is yet another regulatory burden.  Let the current efforts enter into full effect before consideration is given to another tranche of regulations, they contend.

For now, the IMO is leaning toward a goal-based approach, rather than proscriptive regulations.  The approach under consideration would provide flexibility along with incentives for continued innovation for further reductions in air emissions.  Possible technical approaches include setting new energy efficiency standards for existing ships and establishing power limitations for ships.  Speed optimization, speed limits, and carbon intensity reduction targets are under consideration as possible technical approaches.

When bunker prices rose sharply in 2008, many in the marine sector adopted ‘slow steaming’ as a means to reduce expenses.  Slow steaming was implemented voluntarily by the industry to address a recognized problem.  There were no regulations, no monitoring and no reporting.  The approach largely worked and remained in place until bunker prices moderated and the market adjusted.

It is suggested that a voluntary program be adopted again.  The marine industry should be encouraged by the IMO, national governments, cargo interests, environmental advocacy groups and the public to engage in slow steaming, with all the benefits cited above.  For cargo interests that demand speed of delivery, there should be surcharges in excess of the higher fuel costs so as to account for the environmental costs.  These environmental costs could be somewhat analogous to a carbon tax.  This would discourage, but not prohibit, ship owners and operators from acceding to demands from cargo interests for the higher speeds.

With minimal tweaking, the marketplace should be able to arrive at the desired solution with more efficiency than the IMO and national regulators could ever expect to achieve.  If, and only if, a voluntary approach such as that suggested here fails, should mandatory requirements be taken under consideration. 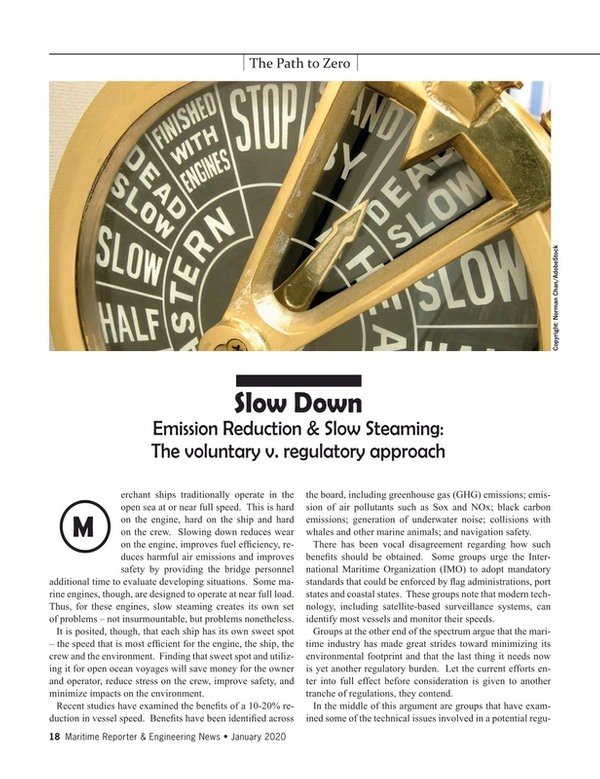