It was Canadian whalers, the Norwegians tell us, who first noticed that a dead whale does not bob in the waves. The carcass didn’t pitch or roll, either, and it was somehow “self-propelled” — its fins giving it forward motion and acting as stabilizers, or foils. The story still inspires Trondheim company Wavefoil, maker of scalable, retractable foils that offer ship owners and designers fuel savings and passenger comfort. In Norway, high-speed ferries, cruise ships and fishing vessels are the first customers for retrofits and newbuilds.

You have to stand on an exposed seawall protecting a tiny Norwegian village’s little marina to realize how “the basics” must be in place before you can mimic the security of town life.

The yellow ambulance vessel bobbing up and down alongside two camouflaged patrol boats is not, we tell ourselves, where you want to end up should you need emergency hospital transport through major sea states. Yet, when people get hurt living among these parts, they prefer boat ambulance over those that come by air or road. Travel times are three-times shorter.

Fast-forward 10 years, and the 3D impression of another ambulance launch catches our eye at Nor-Shipping in southern Norway. “Can I help you,” asks Wavefoil sales engineer, Michael Paulsen. We ask about the yellow ambulance catamaran at his stand, and he tells us it’s the future property of Loppa Legeskyss, a company that’ll operate an ambulance service in northern Norway’s remote Finnmark county. A high-speed catamaran, it’s a USD 22 million project that’ll cost USD 1 million a year to operate. The winning tender shows how catamarans sporting a Wavefoil stabilizer can be competitive on cost and comfort. 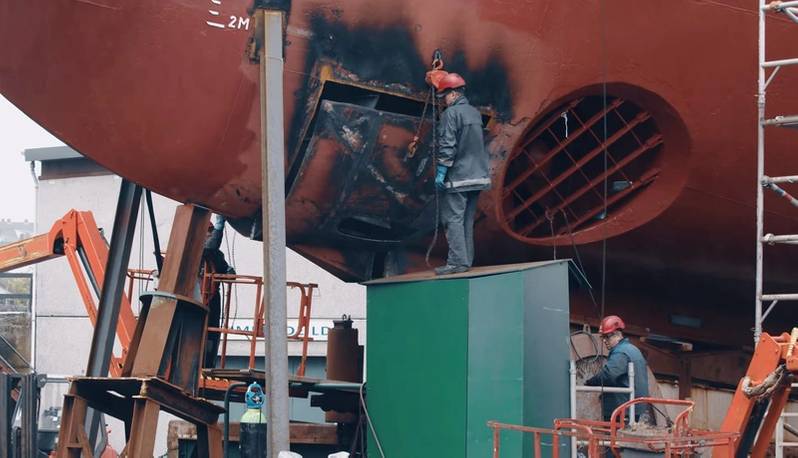 Rough opening: the making of a foil’s “moonpool” (and finished). Credit: Wavefoil

“The tender company won that job due to the Wavefoil. It offered the best combination of speed and comfort,” says Paulsen. Indeed, the ambulance operator offered to shorten by an hour the up-to three-hour journey to Hammerfest hospital. It’ll do that by travelling 10 knots faster for the same amount of comfort as a vessel unequipped without the Wavefoil. The installation aboard an Alusafe CAT 21 designed by Lindstoel Skip in southern Norway is scheduled for June 2020 at Maritime Partner in Aalesund.

“The (ambulance boat) has been evaluated based on hull strength, manouverability, stability together with the ability to keep a high service speed in bad weather,” Hammerfest Hospital said of the order. The tender revealed a demand that vessels be comfortable travelling 254 km in rough seas on trips that could take 1.5 hours (vs. 4 by road ambulance).

The 22 m boat’s Volvo Penta IPS 1050 will help it do 32 knots carrying 12 passengers, plus two stretcher holders. Passenger access appears to be from three decks via stretcher davits; floating dock or high pier, with ramps between deck. 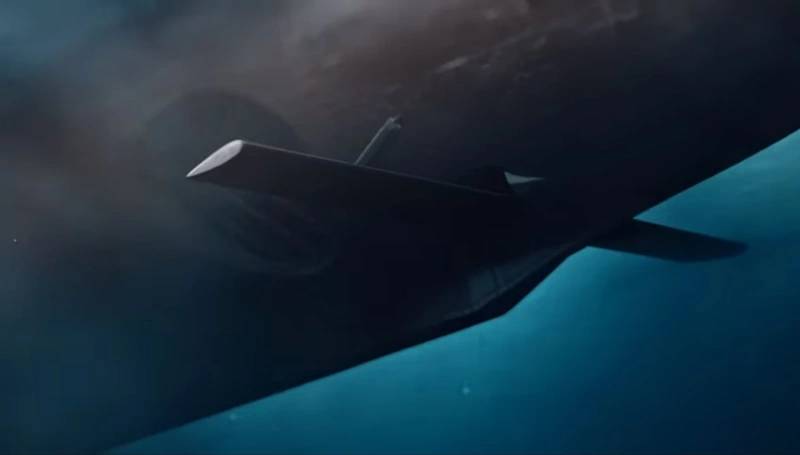 Push-button deployment: the deployed Wavefoil wings aboard the Faroese Ro-Pax ferry, Teistin. Credit: WavefoilStable RoPax
After that conference encounter with Paulsen, we meet him again on an October 2019 fact-finding trip in Trondheim. He seems a little more stressed this time but in good spirits.

Then in November we learn why: Wavefoil was having one of those critical business months the founders of start-ups talk about. We learn than a pilot project with Faroese ferry operator SSL has been a major success both in terms of business and in obtaining performance numbers for pre- and post-installations of the Wavefoil stabilizers. Suddenly for Paulsen, it seems they’re on the path to becoming a go-to company for retrofit and newbuild foils.

“We’ll post something on this. We have the fuel consumption for that ferry for the last three years. We have November versus the average time, and November with foils produced a 15% reduction,” he says. As with all foils, the pitch and roll improved, but most importantly, the 45-meter ferry has been used “all the time” — deploying its foils several times a day in rough, open seas. After its Wavefoil retrofit, it continues to ply a 45-minute crossing as workhorse for the tiny island nation.

“The captain had stars in his eyes, so to speak, at the ease of maintenance (and the retrofit). That’s because all moving parts are at the top of the installation,” Paulsen says, adding, “You can easily lift it out of the vessel, regardless of size, for maintenance. What kind of maintenance? (On a larger vessel), the moonpool. We call it a moonpool. Most agree it is, but for some reason, some disagree. We just mount the module in the moonpool. It’s structurally part of the hull.”

Forged from Trondheim’s NTNU university spinoff community in 2016, Wavefoil is starting to make waves. Apart from the Faroese ferry, The Teistin, and the ambulance vessel, Ocean Loppa, they’re installed aboard the 130-meter, electric, whale-watching, cruise catamaran, Brim Explorer (by Naval Dyanmics), and a sister ship is due to be delivered for Spitzbergen whale-watching in April 2020. The ambulance is due out in August 2020 after some delay related to public hospital tenders. For all these vessels — catamaran and monohulled — pitch reduction is said to be as much as 30 percent with fuel savings of between five and 15 percent, on average. 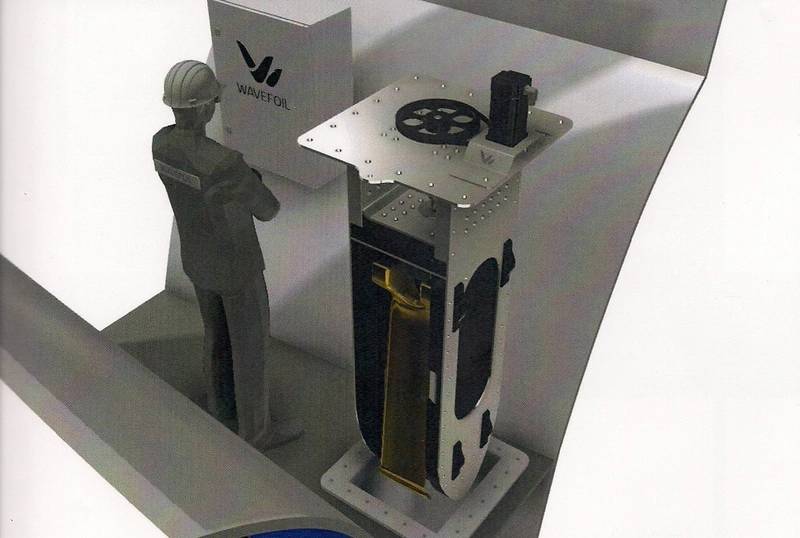 Scaleable: the smaller, catamaran Wavefoil stabilizer. Credit: Wavefoil
Large newbuild
As far as references go, the Faroe Islands RoPax was the first test of a platform installed module-by-module over about seven days via a custom-made “moonpool”.

Wavefoil has also secured orders that’ll put stabilizers aboard all four coastal steamers of the new liner, Havila Kystruten. The 130 m Kystruten vessels are expected to save USD 330,000 a year on fuel for having the retractable Wavefoil fins installed. The operator will, Paulsen says, spare the environment about 2,000 tons of carbon-dioxide emissions a year. For these larger vessels, payback comes in about 2.5 years for foils of composite, flexible material. Smaller orders are of steel construction.

Paulsen says vessel owners are well-versed on performance trade-offs. “They have designed and planned it and removed the bow thruster (and bulbous bow) for this,” he says, adding that a large unit can weigh about 60 tons while still being out of the way and easy to install. For those hoping to retrofit their way to fuel efficiency and comfort, he says it’s all there in black and white.

“Retrofits — we weld a box into the hull and lower the foil into it. There’s a mounting system. You don’t need any new documentation, it’s covered by DNV GL. We don’t need it because of the way it’s isolated (in a vessel’s bulkhead recesses).”

Module masters
More retrofits of newbuilds incorporating Wavefoil stabilizers are in the cards. The ambulance launch, RoPax ferry and cruise ship show the units are scalable. Already, Rolls-Royce is understood to be drawing up a fishing vessel sporting a Wavefoil.

Fishing boat captains, like the captain of the Faroese RoPax, ought to be impressed by the foil’s ability to retract “without the captain knowing it”. It’s push-button. On Teistin, the captain was understood to have asked, “What are they (the assembly crew) doing,” as the install seemed so perplexingly straightforward. The captain of the Brim Explorer and the ambulance vessel will be next in line to deliver comment.
Paulsen says Wavefoil expects to sell “four or five modules” in 2020 in three different sizes — ferry weight 6.3 t for mono-hulls of 30 m to 50 m — and two others: the catamaran version (as on the electric cruise catamaran) and the ambulance type, which is a smaller, custom module of 432 kilograms.

The only thing preventing more sales, Paulsen says, is the company’s relative obscurity in the market. “The only obstacle is that we’re quite new. But, we’re sort of the first to install on a ferry. That was the biggest thing, getting someone to try it out first. It’s (still) a conservative business.” 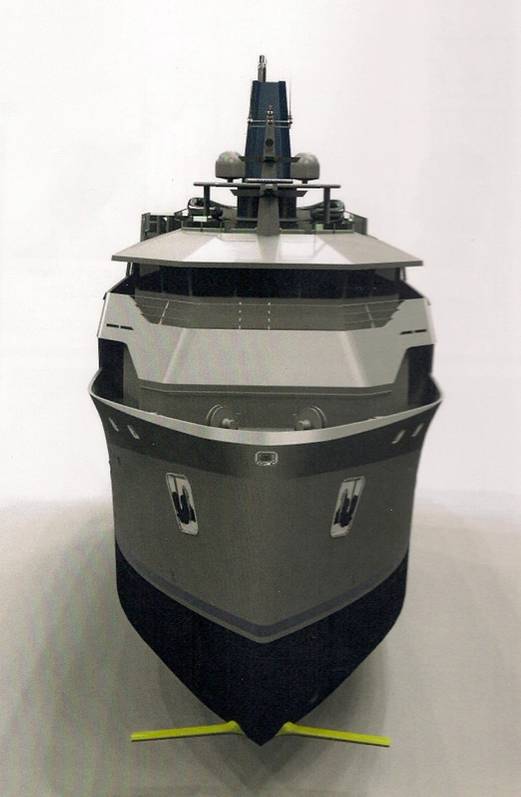 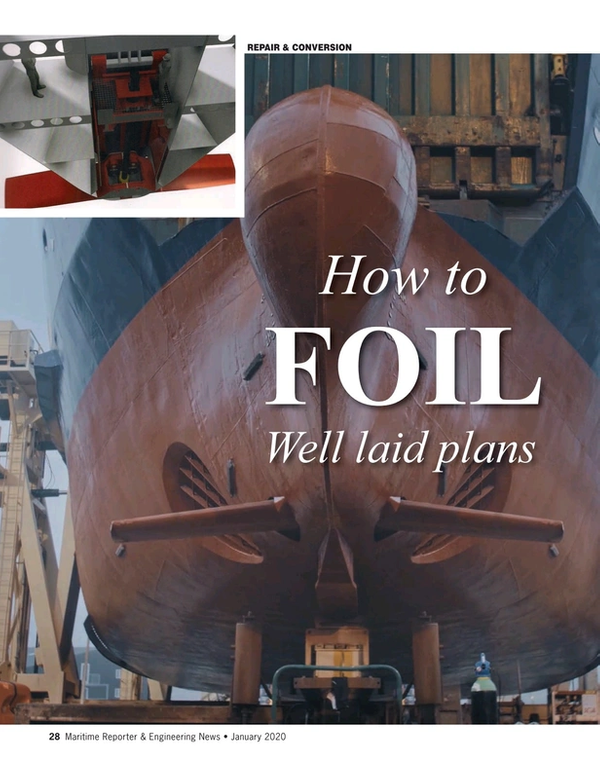