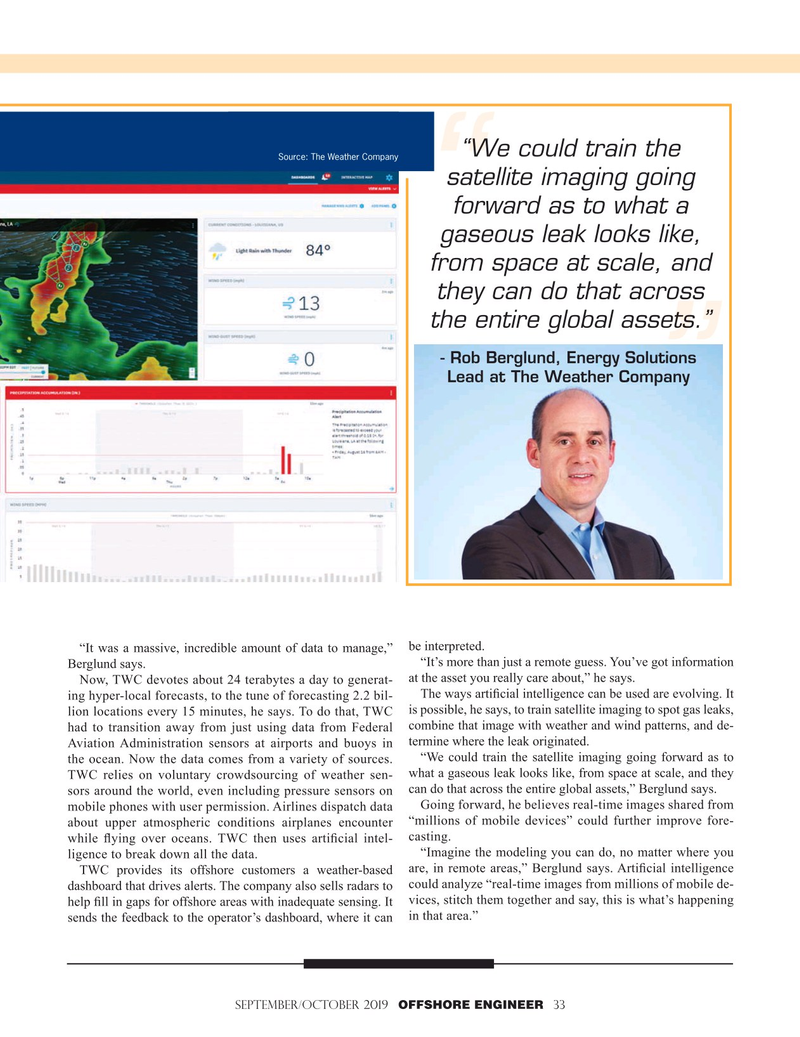 “We could train the

Source: The Weather Company satellite imaging going forward as to what a gaseous leak looks like, from space at scale, and they can do that across the entire global assets.” - Rob Berglund, Energy Solutions

Lead at The Weather Company “It was a massive, incredible amount of data to manage,” be interpreted.

“It’s more than just a remote guess. You’ve got information

at the asset you really care about,” he says.

Now, TWC devotes about 24 terabytes a day to generat-

The ways arti? cial intelligence can be used are evolving. It ing hyper-local forecasts, to the tune of forecasting 2.2 bil- lion locations every 15 minutes, he says. To do that, TWC is possible, he says, to train satellite imaging to spot gas leaks, had to transition away from just using data from Federal combine that image with weather and wind patterns, and de-

Aviation Administration sensors at airports and buoys in termine where the leak originated.

“We could train the satellite imaging going forward as to the ocean. Now the data comes from a variety of sources. what a gaseous leak looks like, from space at scale, and they

TWC relies on voluntary crowdsourcing of weather sen- sors around the world, even including pressure sensors on can do that across the entire global assets,” Berglund says.

while ? ying over oceans. TWC then uses arti? cial intel- “Imagine the modeling you can do, no matter where you ligence to break down all the data.

TWC provides its offshore customers a weather-based are, in remote areas,” Berglund says. Arti? cial intelligence dashboard that drives alerts. The company also sells radars to could analyze “real-time images from millions of mobile de- help ? ll in gaps for offshore areas with inadequate sensing. It vices, stitch them together and say, this is what’s happening sends the feedback to the operator’s dashboard, where it can in that area.”