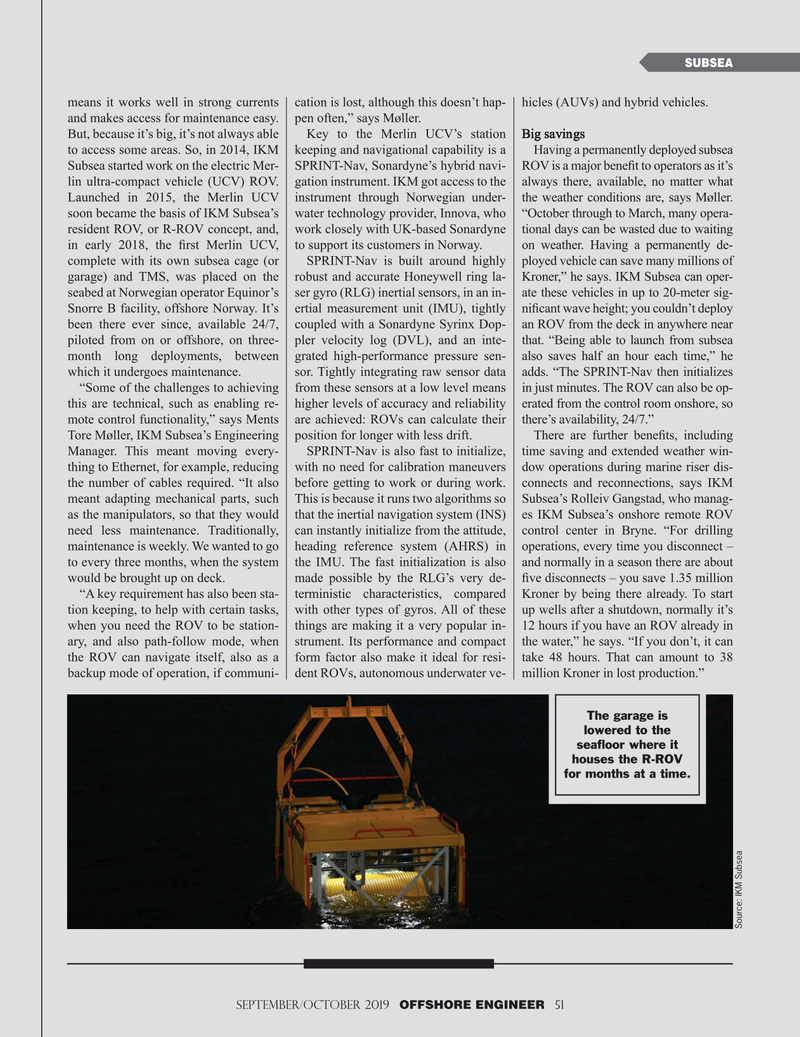 But, because it’s big, it’s not always able Key to the Merlin UCV’s station Big savings to access some areas. So, in 2014, IKM keeping and navigational capability is a Having a permanently deployed subsea

Subsea started work on the electric Mer- SPRINT-Nav, Sonardyne’s hybrid navi- ROV is a major bene? t to operators as it’s lin ultra-compact vehicle (UCV) ROV. gation instrument. IKM got access to the always there, available, no matter what

Launched in 2015, the Merlin UCV instrument through Norwegian under- the weather conditions are, says Møller. soon became the basis of IKM Subsea’s water technology provider, Innova, who “October through to March, many opera- resident ROV, or R-ROV concept, and, work closely with UK-based Sonardyne tional days can be wasted due to waiting in early 2018, the ? rst Merlin UCV, to support its customers in Norway. on weather. Having a permanently de- complete with its own subsea cage (or SPRINT-Nav is built around highly ployed vehicle can save many millions of garage) and TMS, was placed on the robust and accurate Honeywell ring la- Kroner,” he says. IKM Subsea can oper- seabed at Norwegian operator Equinor’s ser gyro (RLG) inertial sensors, in an in- ate these vehicles in up to 20-meter sig-

Snorre B facility, offshore Norway. It’s ertial measurement unit (IMU), tightly ni? cant wave height; you couldn’t deploy been there ever since, available 24/7, coupled with a Sonardyne Syrinx Dop- an ROV from the deck in anywhere near piloted from on or offshore, on three- pler velocity log (DVL), and an inte- that. “Being able to launch from subsea month long deployments, between grated high-performance pressure sen- also saves half an hour each time,” he which it undergoes maintenance. sor. Tightly integrating raw sensor data adds. “The SPRINT-Nav then initializes “Some of the challenges to achieving from these sensors at a low level means in just minutes. The ROV can also be op- this are technical, such as enabling re- higher levels of accuracy and reliability erated from the control room onshore, so mote control functionality,” says Ments are achieved: ROVs can calculate their there’s availability, 24/7.”

Manager. This meant moving every- SPRINT-Nav is also fast to initialize, time saving and extended weather win- thing to Ethernet, for example, reducing with no need for calibration maneuvers dow operations during marine riser dis- the number of cables required. “It also before getting to work or during work. connects and reconnections, says IKM meant adapting mechanical parts, such This is because it runs two algorithms so Subsea’s Rolleiv Gangstad, who manag- as the manipulators, so that they would that the inertial navigation system (INS) es IKM Subsea’s onshore remote ROV need less maintenance. Traditionally, can instantly initialize from the attitude, control center in Bryne. “For drilling maintenance is weekly. We wanted to go heading reference system (AHRS) in operations, every time you disconnect – to every three months, when the system the IMU. The fast initialization is also and normally in a season there are about would be brought up on deck. made possible by the RLG’s very de- ? ve disconnects – you save 1.35 million “A key requirement has also been sta- terministic characteristics, compared Kroner by being there already. To start tion keeping, to help with certain tasks, with other types of gyros. All of these up wells after a shutdown, normally it’s when you need the ROV to be station- things are making it a very popular in- 12 hours if you have an ROV already in ary, and also path-follow mode, when strument. Its performance and compact the water,” he says. “If you don’t, it can the ROV can navigate itself, also as a form factor also make it ideal for resi- take 48 hours. That can amount to 38 backup mode of operation, if communi- dent ROVs, autonomous underwater ve- million Kroner in lost production.”

The garage is lowered to the sea? oor where it houses the R-ROV for months at a time.