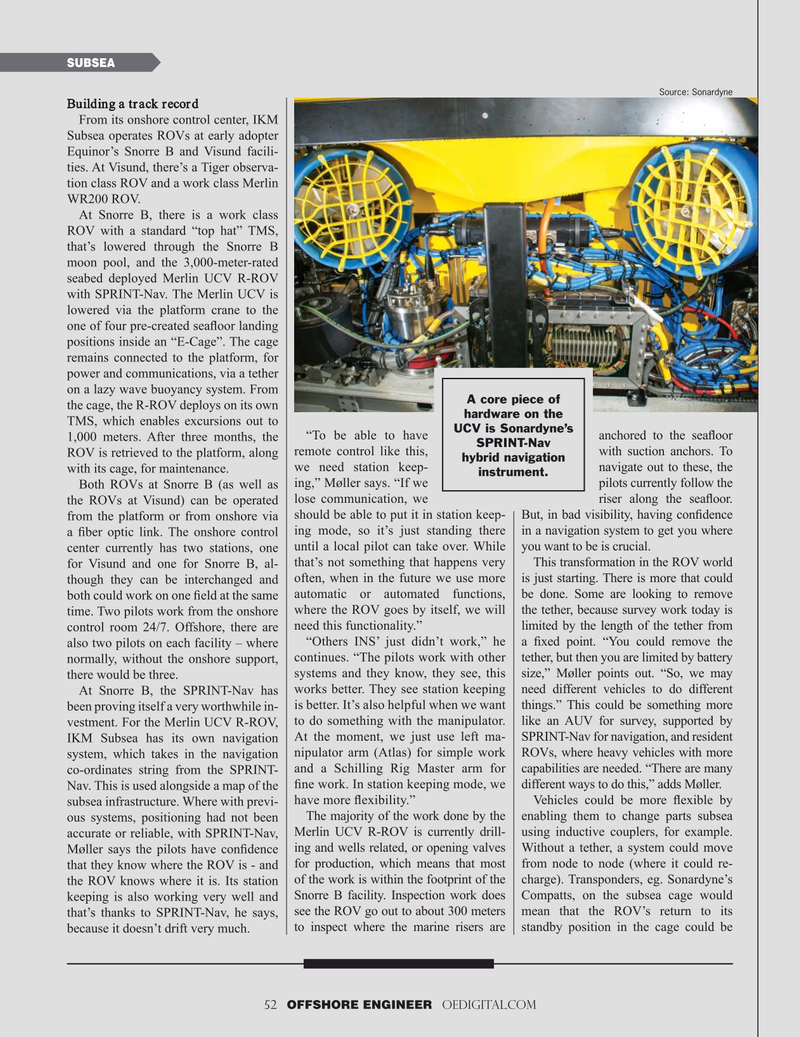 From its onshore control center, IKM

At Snorre B, there is a work class

ROV with a standard “top hat” TMS, that’s lowered through the Snorre B moon pool, and the 3,000-meter-rated seabed deployed Merlin UCV R-ROV with SPRINT-Nav. The Merlin UCV is lowered via the platform crane to the one of four pre-created sea? oor landing positions inside an “E-Cage”. The cage remains connected to the platform, for power and communications, via a tether on a lazy wave buoyancy system. From

A core piece of the cage, the R-ROV deploys on its own hardware on the

TMS, which enables excursions out to

UCV is Sonardyne’s “To be able to have anchored to the sea? oor 1,000 meters. After three months, the

ROV is retrieved to the platform, along remote control like this, with suction anchors. To hybrid navigation we need station keep- navigate out to these, the with its cage, for maintenance. instrument.

Both ROVs at Snorre B (as well as ing,” Møller says. “If we pilots currently follow the the ROVs at Visund) can be operated lose communication, we riser along the sea? oor. from the platform or from onshore via should be able to put it in station keep- But, in bad visibility, having con? dence a ? ber optic link. The onshore control ing mode, so it’s just standing there in a navigation system to get you where center currently has two stations, one until a local pilot can take over. While you want to be is crucial. that’s not something that happens very This transformation in the ROV world for Visund and one for Snorre B, al- though they can be interchanged and often, when in the future we use more is just starting. There is more that could both could work on one ? eld at the same automatic or automated functions, be done. Some are looking to remove time. Two pilots work from the onshore where the ROV goes by itself, we will the tether, because survey work today is control room 24/7. Offshore, there are need this functionality.” limited by the length of the tether from “Others INS’ just didn’t work,” he a ? xed point. “You could remove the also two pilots on each facility – where normally, without the onshore support, continues. “The pilots work with other tether, but then you are limited by battery systems and they know, they see, this size,” Møller points out. “So, we may there would be three.

At Snorre B, the SPRINT-Nav has works better. They see station keeping need different vehicles to do different is better. It’s also helpful when we want things.” This could be something more been proving itself a very worthwhile in- vestment. For the Merlin UCV R-ROV, to do something with the manipulator. like an AUV for survey, supported by

IKM Subsea has its own navigation At the moment, we just use left ma- SPRINT-Nav for navigation, and resident system, which takes in the navigation nipulator arm (Atlas) for simple work ROVs, where heavy vehicles with more and a Schilling Rig Master arm for capabilities are needed. “There are many co-ordinates string from the SPRINT-

Nav. This is used alongside a map of the ? ne work. In station keeping mode, we different ways to do this,” adds Møller. have more ? exibility.” Vehicles could be more ? exible by subsea infrastructure. Where with previ-

The majority of the work done by the enabling them to change parts subsea ous systems, positioning had not been accurate or reliable, with SPRINT-Nav, Merlin UCV R-ROV is currently drill- using inductive couplers, for example.

Møller says the pilots have con? dence ing and wells related, or opening valves Without a tether, a system could move that they know where the ROV is - and for production, which means that most from node to node (where it could re- the ROV knows where it is. Its station of the work is within the footprint of the charge). Transponders, eg. Sonardyne’s keeping is also working very well and Snorre B facility. Inspection work does Compatts, on the subsea cage would that’s thanks to SPRINT-Nav, he says, see the ROV go out to about 300 meters mean that the ROV’s return to its to inspect where the marine risers are standby position in the cage could be because it doesn’t drift very much. 52 OFFSHORE ENGINEER OEDIGITAL.COM