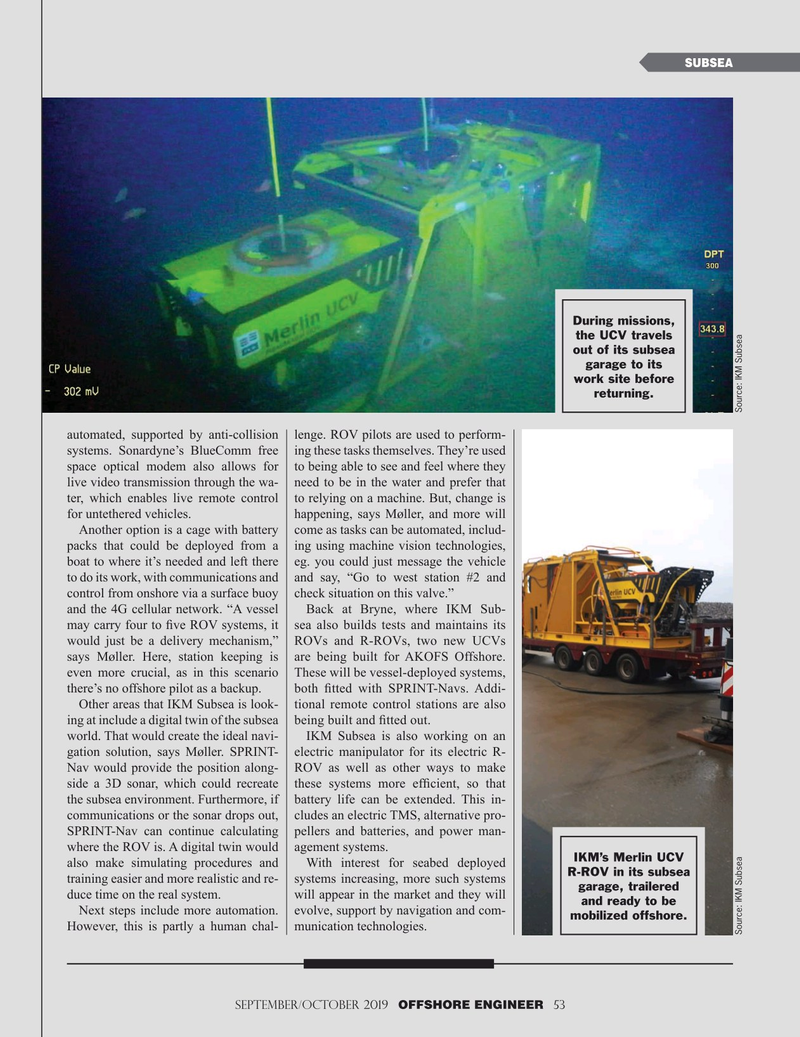 During missions, the UCV travels out of its subsea garage to its work site before returning.

automated, supported by anti-collision lenge. ROV pilots are used to perform- systems. Sonardyne’s BlueComm free ing these tasks themselves. They’re used space optical modem also allows for to being able to see and feel where they live video transmission through the wa- need to be in the water and prefer that ter, which enables live remote control to relying on a machine. But, change is for untethered vehicles. happening, says Møller, and more will

Another option is a cage with battery come as tasks can be automated, includ- packs that could be deployed from a ing using machine vision technologies, boat to where it’s needed and left there eg. you could just message the vehicle to do its work, with communications and and say, “Go to west station #2 and control from onshore via a surface buoy check situation on this valve.” and the 4G cellular network. “A vessel Back at Bryne, where IKM Sub- may carry four to ? ve ROV systems, it sea also builds tests and maintains its would just be a delivery mechanism,” ROVs and R-ROVs, two new UCVs says Møller. Here, station keeping is are being built for AKOFS Offshore. even more crucial, as in this scenario These will be vessel-deployed systems, there’s no offshore pilot as a backup. both ? tted with SPRINT-Navs. Addi-

Other areas that IKM Subsea is look- tional remote control stations are also ing at include a digital twin of the subsea being built and ? tted out.

world. That would create the ideal navi- IKM Subsea is also working on an gation solution, says Møller. SPRINT- electric manipulator for its electric R-

Nav would provide the position along- ROV as well as other ways to make side a 3D sonar, which could recreate these systems more ef? cient, so that the subsea environment. Furthermore, if battery life can be extended. This in- communications or the sonar drops out, cludes an electric TMS, alternative pro-

SPRINT-Nav can continue calculating pellers and batteries, and power man- where the ROV is. A digital twin would agement systems.

R-ROV in its subsea training easier and more realistic and re- systems increasing, more such systems garage, trailered duce time on the real system. will appear in the market and they will and ready to be

Next steps include more automation. evolve, support by navigation and com- mobilized offshore.

However, this is partly a human chal- munication technologies.