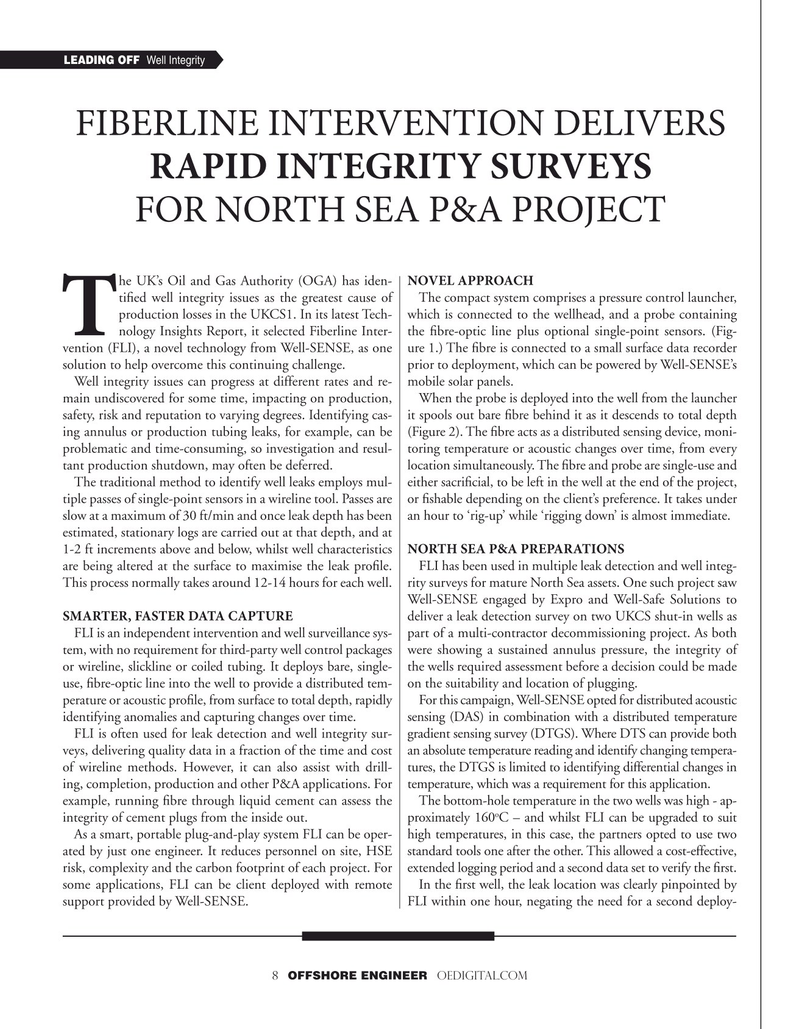 FOR NORTH SEA P&A PROJECT he UK’s Oil and Gas Authority (OGA) has iden- NOVEL APPROACH ti?ed well integrity issues as the greatest cause of The compact system comprises a pressure control launcher, production losses in the UKCS1. In its latest Tech- which is connected to the wellhead, and a probe containing

T nology Insights Report, it selected Fiberline Inter- the ?bre-optic line plus optional single-point sensors. (Fig- vention (FLI), a novel technology from Well-SENSE, as one ure 1.) The ?bre is connected to a small surface data recorder solution to help overcome this continuing challenge. prior to deployment, which can be powered by Well-SENSE’s

Well integrity issues can progress at different rates and re- mobile solar panels. main undiscovered for some time, impacting on production, When the probe is deployed into the well from the launcher safety, risk and reputation to varying degrees. Identifying cas- it spools out bare ?bre behind it as it descends to total depth ing annulus or production tubing leaks, for example, can be (Figure 2). The ?bre acts as a distributed sensing device, moni- problematic and time-consuming, so investigation and resul- toring temperature or acoustic changes over time, from every tant production shutdown, may often be deferred. location simultaneously. The ?bre and probe are single-use and

The traditional method to identify well leaks employs mul- either sacri?cial, to be left in the well at the end of the project, tiple passes of single-point sensors in a wireline tool. Passes are or ?shable depending on the client’s preference. It takes under slow at a maximum of 30 ft/min and once leak depth has been an hour to ‘rig-up’ while ‘rigging down’ is almost immediate.

estimated, stationary logs are carried out at that depth, and at 1-2 ft increments above and below, whilst well characteristics NORTH SEA P&A PREPARATIONS are being altered at the surface to maximise the leak pro?le. FLI has been used in multiple leak detection and well integ-

This process normally takes around 12-14 hours for each well. rity surveys for mature North Sea assets. One such project saw

Well-SENSE engaged by Expro and Well-Safe Solutions to

FLI is an independent intervention and well surveillance sys- part of a multi-contractor decommissioning project. As both tem, with no requirement for third-party well control packages were showing a sustained annulus pressure, the integrity of or wireline, slickline or coiled tubing. It deploys bare, single- the wells required assessment before a decision could be made use, ?bre-optic line into the well to provide a distributed tem- on the suitability and location of plugging. perature or acoustic pro?le, from surface to total depth, rapidly For this campaign, Well-SENSE opted for distributed acoustic identifying anomalies and capturing changes over time. sensing (DAS) in combination with a distributed temperature

FLI is often used for leak detection and well integrity sur- gradient sensing survey (DTGS). Where DTS can provide both veys, delivering quality data in a fraction of the time and cost an absolute temperature reading and identify changing tempera- of wireline methods. However, it can also assist with drill- tures, the DTGS is limited to identifying differential changes in ing, completion, production and other P&A applications. For temperature, which was a requirement for this application.

example, running ?bre through liquid cement can assess the The bottom-hole temperature in the two wells was high - ap- o integrity of cement plugs from the inside out. proximately 160 C – and whilst FLI can be upgraded to suit

As a smart, portable plug-and-play system FLI can be oper- high temperatures, in this case, the partners opted to use two ated by just one engineer. It reduces personnel on site, HSE standard tools one after the other. This allowed a cost-effective, risk, complexity and the carbon footprint of each project. For extended logging period and a second data set to verify the ?rst.

some applications, FLI can be client deployed with remote In the ?rst well, the leak location was clearly pinpointed by support provided by Well-SENSE. FLI within one hour, negating the need for a second deploy- 8 OFFSHORE ENGINEER OEDIGITAL.COM