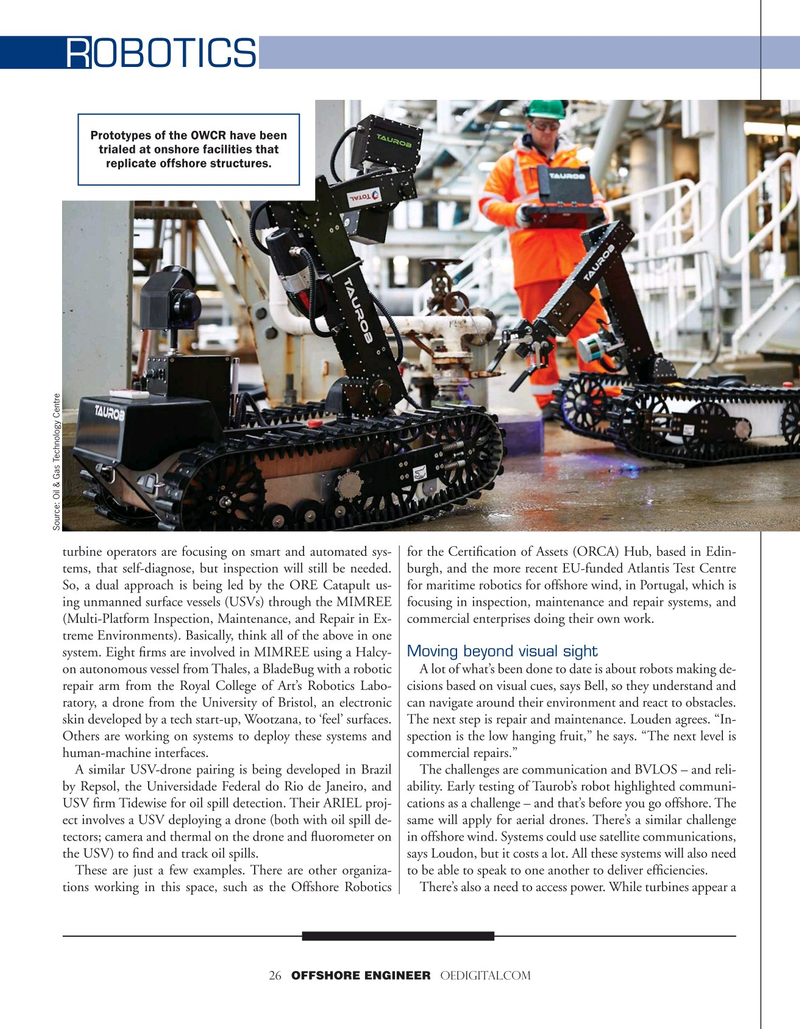 Prototypes of the OWCR have been trialed at onshore facilities that replicate offshore structures.

Source: Oil & Gas Technology Centre turbine operators are focusing on smart and automated sys- for the Certi?cation of Assets (ORCA) Hub, based in Edin- tems, that self-diagnose, but inspection will still be needed. burgh, and the more recent EU-funded Atlantis Test Centre

So, a dual approach is being led by the ORE Catapult us- for maritime robotics for offshore wind, in Portugal, which is ing unmanned surface vessels (USVs) through the MIMREE focusing in inspection, maintenance and repair systems, and (Multi-Platform Inspection, Maintenance, and Repair in Ex- commercial enterprises doing their own work. treme Environments). Basically, think all of the above in one system. Eight ?rms are involved in MIMREE using a Halcy-

Moving beyond visual sight on autonomous vessel from Thales, a BladeBug with a robotic A lot of what’s been done to date is about robots making de- repair arm from the Royal College of Art’s Robotics Labo- cisions based on visual cues, says Bell, so they understand and ratory, a drone from the University of Bristol, an electronic can navigate around their environment and react to obstacles. skin developed by a tech start-up, Wootzana, to ‘feel’ surfaces. The next step is repair and maintenance. Louden agrees. “In-

Others are working on systems to deploy these systems and spection is the low hanging fruit,” he says. “The next level is human-machine interfaces. commercial repairs.”

A similar USV-drone pairing is being developed in Brazil The challenges are communication and BVLOS – and reli- by Repsol, the Universidade Federal do Rio de Janeiro, and ability. Early testing of Taurob’s robot highlighted communi-

USV ?rm Tidewise for oil spill detection. Their ARIEL proj- cations as a challenge – and that’s before you go offshore. The ect involves a USV deploying a drone (both with oil spill de- same will apply for aerial drones. There’s a similar challenge tectors; camera and thermal on the drone and ?uorometer on in offshore wind. Systems could use satellite communications, the USV) to ?nd and track oil spills. says Loudon, but it costs a lot. All these systems will also need

These are just a few examples. There are other organiza- to be able to speak to one another to deliver ef?ciencies. tions working in this space, such as the Offshore Robotics There’s also a need to access power. While turbines appear a 26 OFFSHORE ENGINEER OEDIGITAL.COM