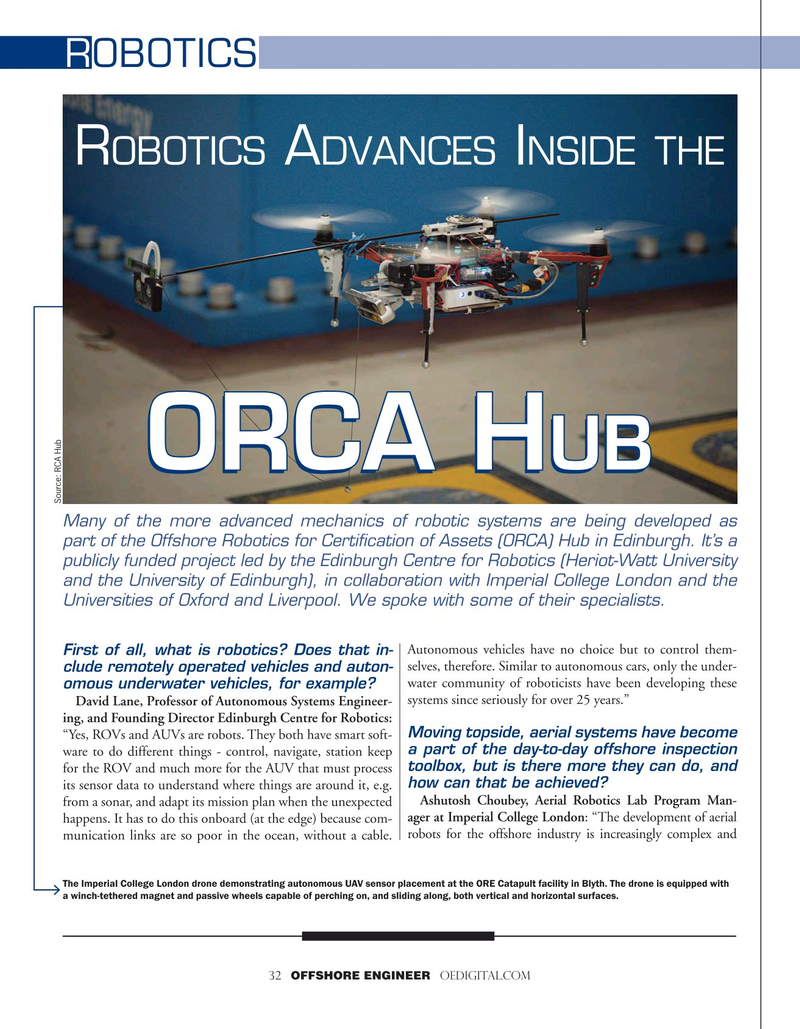 Many of the more advanced mechanics of robotic systems are being developed as part of the Offshore Robotics for Certification of Assets (ORCA) Hub in Edinburgh. It’s a publicly funded project led by the Edinburgh Centre for Robotics (Heriot-Watt University and the University of Edinburgh), in collaboration with Imperial College London and the

Universities of Oxford and Liverpool. We spoke with some of their specialists.

Autonomous vehicles have no choice but to control them-

First of all, what is robotics? Does that in- selves, therefore. Similar to autonomous cars, only the under- clude remotely operated vehicles and auton- water community of roboticists have been developing these omous underwater vehicles, for example? systems since seriously for over 25 years.”

Moving topside, aerial systems have become “Yes, ROVs and AUVs are robots. They both have smart soft- a part of the day-to-day offshore inspection ware to do different things - control, navigate, station keep toolbox, but is there more they can do, and for the ROV and much more for the AUV that must process how can that be achieved?

its sensor data to understand where things are around it, e.g.

Ashutosh Choubey, Aerial Robotics Lab Program Man- from a sonar, and adapt its mission plan when the unexpected ager at Imperial College London: “The development of aerial happens. It has to do this onboard (at the edge) because com- munication links are so poor in the ocean, without a cable. robots for the offshore industry is increasingly complex and

The Imperial College London drone demonstrating autonomous UAV sensor placement at the ORE Catapult facility in Blyth. The drone is equipped with a winch-tethered magnet and passive wheels capable of perching on, and sliding along, both vertical and horizontal surfaces.