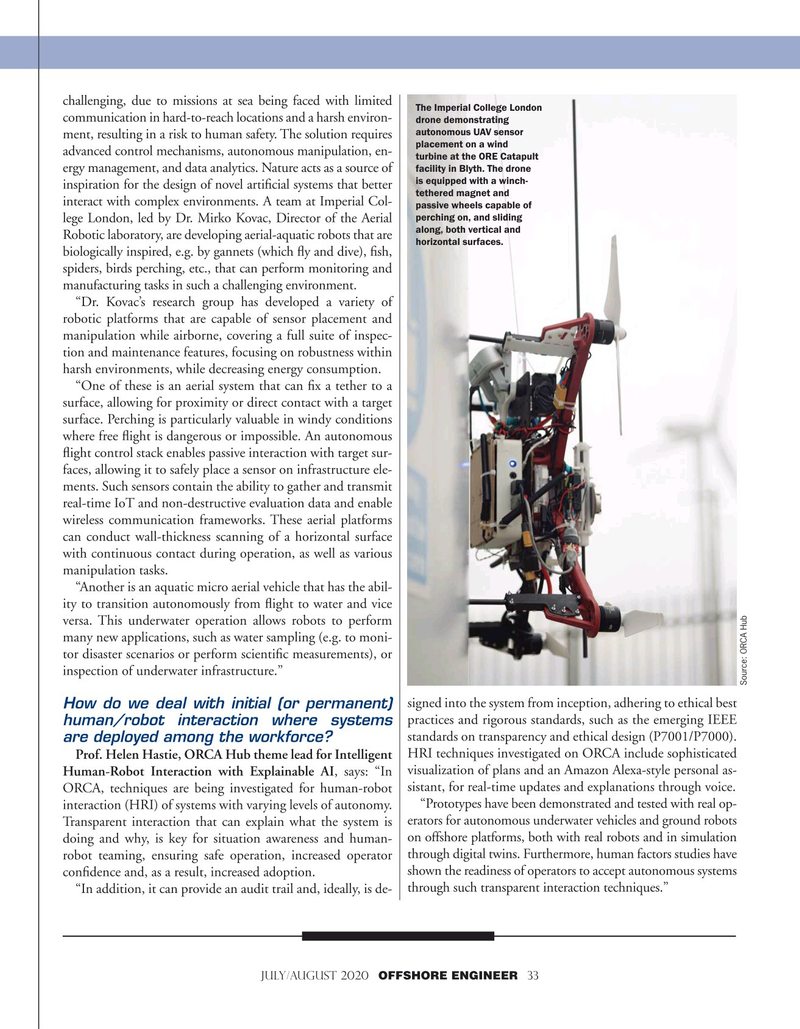 challenging, due to missions at sea being faced with limited

The Imperial College London communication in hard-to-reach locations and a harsh environ- drone demonstrating autonomous UAV sensor ment, resulting in a risk to human safety. The solution requires placement on a wind advanced control mechanisms, autonomous manipulation, en- turbine at the ORE Catapult facility in Blyth. The drone ergy management, and data analytics. Nature acts as a source of is equipped with a winch- inspiration for the design of novel arti?cial systems that better tethered magnet and interact with complex environments. A team at Imperial Col- passive wheels capable of perching on, and sliding lege London, led by Dr. Mirko Kovac, Director of the Aerial along, both vertical and

Robotic laboratory, are developing aerial-aquatic robots that are horizontal surfaces.

biologically inspired, e.g. by gannets (which ?y and dive), ?sh, spiders, birds perching, etc., that can perform monitoring and manufacturing tasks in such a challenging environment. “Dr. Kovac’s research group has developed a variety of robotic platforms that are capable of sensor placement and manipulation while airborne, covering a full suite of inspec- tion and maintenance features, focusing on robustness within harsh environments, while decreasing energy consumption. “One of these is an aerial system that can ?x a tether to a surface, allowing for proximity or direct contact with a target surface. Perching is particularly valuable in windy conditions where free ?ight is dangerous or impossible. An autonomous ?ight control stack enables passive interaction with target sur- faces, allowing it to safely place a sensor on infrastructure ele- ments. Such sensors contain the ability to gather and transmit real-time IoT and non-destructive evaluation data and enable wireless communication frameworks. These aerial platforms can conduct wall-thickness scanning of a horizontal surface with continuous contact during operation, as well as various manipulation tasks.

“Another is an aquatic micro aerial vehicle that has the abil- ity to transition autonomously from ?ight to water and vice versa. This underwater operation allows robots to perform many new applications, such as water sampling (e.g. to moni- tor disaster scenarios or perform scienti?c measurements), or inspection of underwater infrastructure.”

Source: ORCA Hub signed into the system from inception, adhering to ethical best

How do we deal with initial (or permanent) practices and rigorous standards, such as the emerging IEEE human/robot interaction where systems standards on transparency and ethical design (P7001/P7000). are deployed among the workforce?

Human-Robot Interaction with Explainable AI, says: “In visualization of plans and an Amazon Alexa-style personal as-

ORCA, techniques are being investigated for human-robot sistant, for real-time updates and explanations through voice. interaction (HRI) of systems with varying levels of autonomy. “Prototypes have been demonstrated and tested with real op-

Transparent interaction that can explain what the system is erators for autonomous underwater vehicles and ground robots doing and why, is key for situation awareness and human- on offshore platforms, both with real robots and in simulation robot teaming, ensuring safe operation, increased operator through digital twins. Furthermore, human factors studies have con?dence and, as a result, increased adoption. shown the readiness of operators to accept autonomous systems “In addition, it can provide an audit trail and, ideally, is de- through such transparent interaction techniques.”