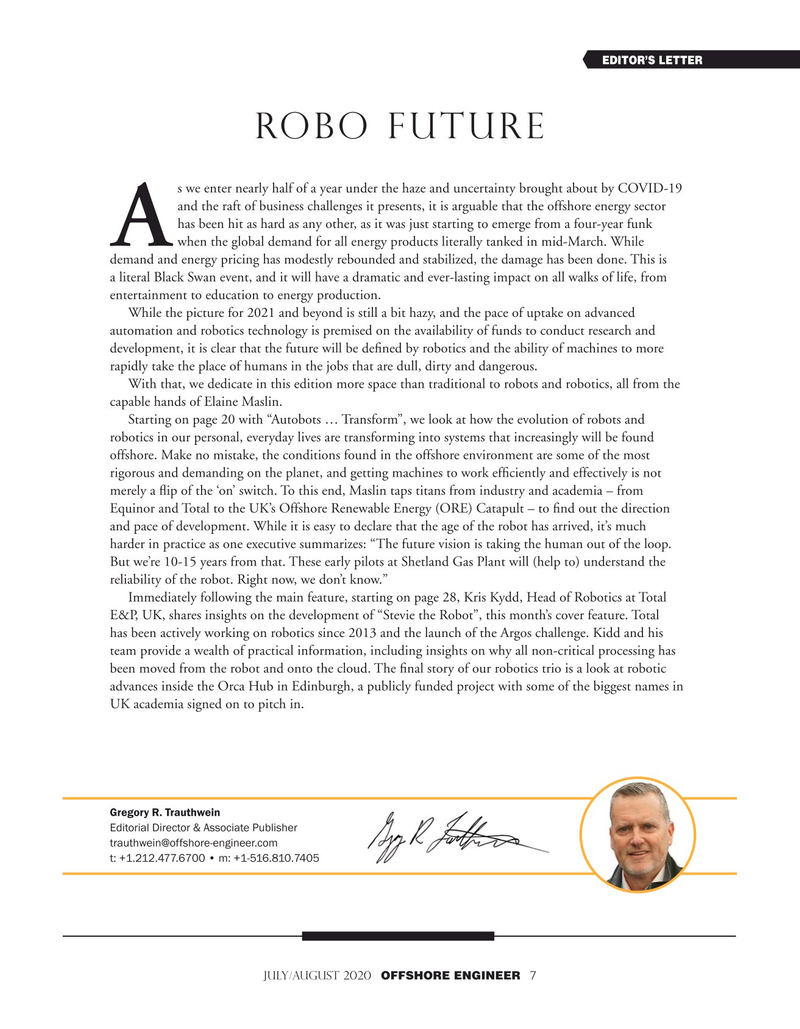 Robo Future s we enter nearly half of a year under the haze and uncertainty brought about by COVID-19 and the raft of business challenges it presents, it is arguable that the offshore energy sector has been hit as hard as any other, as it was just starting to emerge from a four-year funk when the global demand for all energy products literally tanked in mid-March. While

A demand and energy pricing has modestly rebounded and stabilized, the damage has been done. This is a literal Black Swan event, and it will have a dramatic and ever-lasting impact on all walks of life, from entertainment to education to energy production.

While the picture for 2021 and beyond is still a bit hazy, and the pace of uptake on advanced automation and robotics technology is premised on the availability of funds to conduct research and development, it is clear that the future will be de?ned by robotics and the ability of machines to more rapidly take the place of humans in the jobs that are dull, dirty and dangerous.

With that, we dedicate in this edition more space than traditional to robots and robotics, all from the capable hands of Elaine Maslin.

Starting on page 20 with “Autobots … Transform”, we look at how the evolution of robots and robotics in our personal, everyday lives are transforming into systems that increasingly will be found offshore. Make no mistake, the conditions found in the offshore environment are some of the most rigorous and demanding on the planet, and getting machines to work ef?ciently and effectively is not merely a ?ip of the ‘on’ switch. To this end, Maslin taps titans from industry and academia – from

Equinor and Total to the UK’s Offshore Renewable Energy (ORE) Catapult – to ?nd out the direction and pace of development. While it is easy to declare that the age of the robot has arrived, it’s much harder in practice as one executive summarizes: “The future vision is taking the human out of the loop.

But we’re 10-15 years from that. These early pilots at Shetland Gas Plant will (help to) understand the reliability of the robot. Right now, we don’t know.”

E&P, UK, shares insights on the development of “Stevie the Robot”, this month’s cover feature. Total has been actively working on robotics since 2013 and the launch of the Argos challenge. Kidd and his team provide a wealth of practical information, including insights on why all non-critical processing has been moved from the robot and onto the cloud. The ?nal story of our robotics trio is a look at robotic advances inside the Orca Hub in Edinburgh, a publicly funded project with some of the biggest names in

UK academia signed on to pitch in.